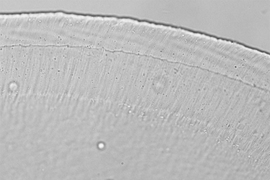 ↓ Download Image
Caption: This image, taken through an optical microscope, shows a cross-section of the tectorial membrane, a gelatinous structure that lies atop the tiny hairs that line the inner ear.
Credits: Photo by Jonathan Sellon, MIT micromechanics group

Caption:
This image, taken through an optical microscope, shows a cross-section of the tectorial membrane, a gelatinous structure that lies atop the tiny hairs that line the inner ear.
Credits:
Photo by Jonathan Sellon, MIT micromechanics group

The human ear, like those of other mammals, is so extraordinarily sensitive that it can detect sound-wave-induced vibrations of the eardrum that move by less than the width of an atom. Now, researchers at MIT have discovered important new details of how the ear achieves this amazing ability to pick up faint sounds.

The new findings help explain how our ears can detect vibrations a million times less intense than those we can detect through the sense of touch, for example. The results appear in the journal Physical Review Letters, in a paper by visiting scientist and lead author Jonathan Sellon, professor of electrical engineering and senior author Dennis Freeman, visiting scientist Roozbeh Ghaffari, and members of the Grodzinsky group at MIT.

Both the ear’s sensitivity and its selectivity — its ability to distinguish different frequencies of sound — depend crucially on the behavior of a minuscule gelatinous structure in the inner ear called the tectorial membrane, which Freeman and his students have been studying for more than a decade. Now, they have found that the way the gel membrane gives our hearing its extreme sensitivity has to do with the size, stiffness, and distribution of nanoscale pores in that membrane, and the way those nanopores control the movement of water within the gel.

The tectorial membrane lies atop the tiny hairs that line the inner ear, or cochlea. These sensory receptors are arranged in tufts that are each sensitive to different frequencies of sound, in a progression along the length of the tightly curled structure. The fact that the tips of those hairs are embedded in the tectorial membrane means its behavior strongly affects the way those hairs respond to sound.

“Mechanically, it’s Jell-O,” Freeman says, describing the tiny tectorial membrane, which is thinner than a hair. Though it’s essentially a saturated sponge-like structure made mostly of water, “if you squeeze it as hard as you can, you can’t get the water out. It’s held together by electrostatic forces,” he explains. But though there are many gel-based materials in the body, including cartilage, elastin and tendons, the tectorial membrane develops from a different set of genetic instructions.

The purpose of the structure was a puzzle initially. “Why would you want that?” Sellon says. Sitting right on top of the sensitive sound-pickup structure, “it’s the kind of thing that muffles most kinds of microphones,” he says. “Yet it’s essential for hearing,” and any defects in its structure caused by gene variations can significantly degrade a person’s hearing.

After detailed tests of the microscopic structure, the team found that the size and arrangement of pores within it, and the way those properties affect how water within the gel moves back and forth between pores in response to vibration, makes the response of the whole system highly selective. Both the highest and lowest tones coming into the ear are less affected by the amplification provided by the tectorial membrane, while the middle frequencies are more strongly amplified.

“It’s tuned just right to get the signal you need,” Sellon says, to amplify the sounds that are most useful.

This diagram depicts how the tectorial membrane works to enhance hearing. The pistons at top and bottom depict how variations in the fluid pressure within the inner hear, which causes bundles of microscopic hairs (depicted as the black structures in the gap at top, to move, each of them tuned to different frequencies of sound. The tectorial membrane, whose unusual properties the team studied, is the gray shaded structure at top. Animation courtesy of MIT micromechanics group.

The team found that the tectorial membrane’s structure “looked like a solid but behaved like a liquid,” Freeman says — which makes sense since it is composed mostly of liquid. “What we’re finding is that the tectorial membrane is less solid than we thought.” The key finding, which he says the team hadn’t anticipated, was that “for middle frequencies, the structure moves as a liquid, but for high and low frequencies, it only behaves as a solid.”

Overall, the researchers hope that a better understanding of these mechanisms may help in devising ways to counteract various kinds of hearing impairment — either through mechanical aids such as improved cochlear implants, or medical interventions such as drugs that may alter the nanopores or the properties of the fluid in the tectorial membrane. “If the size of the pores is important for the functioning of hearing, there are things you could do,” Freeman says.

“This is really wonderful work, “ says John S. Oghalai, a professor and chair

of the department of otolaryngology at the University of Southern California, who was not associated with the research. “The mechanical nature of the nanoscale structures of the inner ear is extremely hard to study but critically important to hearing. In this study, the authors show that the proteins within the tectorial membrane and the fluid interspersed between them are ‘tuned.’ This may finally explain how each hair cell is stimulated at its correct frequency.”

Oghalai adds, “this research is of the highest quality. Not only were exquisite experiments performed, the data were modeled mathematically to develop a deep understanding of their implications.” One thing that remains to be done, he says, is that since these tests were done on excised tissue, “it remains to be seen whether these findings are relevant in the normal inner ear of living animals.”

Other authors of the paper include Mojtaba Azadi, Ramin Oftadeh, and Alan Grodzinsky at MIT and Hadi Tavakoli Nia at Massachusetts General Hospital and Harvard Medical School. This research was supported by the National Institutes of Health and the National Science Foundation.

MIT researchers have found that a small gelatinous structure, called the tectorial membrane, gives the human ear its extraordinary ability to detect faint sounds, reports the Xinhua news agency. The findings “could help devise ways to treat hearing impairment via medical interventions that alter the pores or the properties of the fluid in the membrane.”

Nanopores underlie our ability to tune in to a single voice

Tuning in to a new hearing mechanism