Nanopores underlie our ability to tune in to a single voice 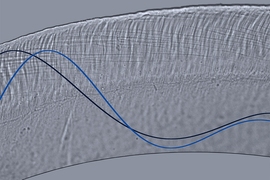 ↓ Download Image
Caption: This optical microscope image depicts wave motion in a cross-section of the tectorial membrane, part of the inner ear. This membrane is a microscale gel, smaller in width than a single human hair, and it plays a key role in stimulating sensory receptors of the inner ear. Waves traveling on this membrane control our ability to separate sounds of varying pitch and intensity.
Credits: Image courtesy of MIT's Micromechanics Group

Caption:
This optical microscope image depicts wave motion in a cross-section of the tectorial membrane, part of the inner ear. This membrane is a microscale gel, smaller in width than a single human hair, and it plays a key role in stimulating sensory receptors of the inner ear. Waves traveling on this membrane control our ability to separate sounds of varying pitch and intensity.
Credits:
Image courtesy of MIT's Micromechanics Group

Even in a crowded room full of background noise, the human ear is remarkably adept at tuning in to a single voice — a feat that has proved remarkably difficult for computers to match. A new analysis of the underlying mechanisms, conducted by researchers at MIT, has provided insights that could ultimately lead to better machine hearing, and perhaps to better hearing aids as well.

Our ears’ selectivity, it turns out, arises from evolution’s precise tuning of a tiny membrane, inside the inner ear, called the tectorial membrane. The viscosity of this membrane — its firmness, or lack thereof — depends on the size and distribution of tiny pores, just a few tens of nanometers wide. This, in turn, provides mechanical filtering that helps to sort out specific sounds.

The new findings are reported in the Biophysical Journal by a team led by MIT graduate student Jonathan Sellon, and including research scientist Roozbeh Ghaffari, former graduate student Shirin Farrahi, and professor of electrical engineering Dennis Freeman. The team collaborated with biologist Guy Richardson of the University of Sussex.

In discriminating among competing sounds, the human ear is “extraordinary compared to conventional speech- and sound-recognition technologies,” Freeman says. The exact reasons have remained elusive — but the importance of the tectorial membrane, located inside the cochlea, or inner ear, has become clear in recent years, largely through the work of Freeman and his colleagues. Now it seems that a flawed assumption contributed to the longstanding difficulty in understanding the importance of this membrane.

In fact, Freeman and his co-authors previously found that tectorial membranes with a certain genetic defect are actually highly sensitive to variations in frequency — and the result is worse hearing, not better.

The MIT team found “a fundamental tradeoff between how well you can resolve different frequencies and how long it takes to do it,” Freeman explains. That makes the finer frequency discrimination too slow to be useful in real-world sound selectivity.

Too fast for neurons

Previous work by Freeman and colleagues has shown that the tectorial membrane plays a fundamental role in sound discrimination by carrying waves that stimulate a particular kind of sensory receptor. This process is essential in deciphering competing sounds, but it takes place too quickly for neural processes to keep pace. Nature, over the course of evolution, appears to have produced a very effective electromechanical system, Freeman says, that can keep up with the speed of these sound waves.

The new work explains how the membrane’s structure determines how well it filters sound. The team studied two genetic variants that cause nanopores within the tectorial membrane to be smaller or larger than normal. The pore size affects the viscosity of the membrane and its sensitivity to different frequencies.

The tectorial membrane is spongelike, riddled with tiny pores. By studying how its viscosity varies with pore size, the team was able to determine that the typical pore size observed in mice — about 40 nanometers across — represents an optimal size for combining frequency discrimination with overall sensitivity. Pores that are larger or smaller impair hearing.

“It really changes the way we think about this structure,” Ghaffari says. The new findings show that fluid viscosity and pores are actually essential to its performance. Changing the sizes of tectorial membrane nanopores, via biochemical manipulation or other means, can provide unique ways to alter hearing sensitivity and frequency discrimination.

William Brownell, a professor of otolaryngology at Baylor College of Medicine, says, “This is the first study to suggest that porosity may affect cochlear tuning.” This work, he adds, “could provide insight” into the development of specific hearing problems.

The research was supported by the National Institutes of Health; the National Science Foundation; and the Wellcome Trust.

Tuning in to a new hearing mechanism