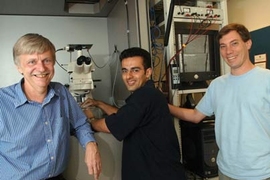 MIT researchers have discovered a hearing mechanism that fundamentally changes the current understanding of inner ear function. This new mechanism could help explain the ear's remarkable ability to sense and discriminate sounds. Its discovery could eventually lead to improved systems for restoring hearing.

The research is described in the advance online issue of the Proceedings of the National Academy of Sciences the week of October 8.

MIT Professor Dennis M. Freeman, working with graduate student Roozbeh Ghaffari and research scientist Alexander J. Aranyosi, found that the tectorial membrane, a gelatinous structure inside the cochlea of the ear, is much more important to hearing than previously thought. It can selectively pick up and transmit energy to different parts of the cochlea via a kind of wave that is different from that commonly associated with hearing.

Ghaffari, the lead author of the paper, is in the Harvard-MIT Division of Health Sciences and Technology, as is Freeman. All three researchers are in MIT's Research Laboratory of Electronics. Freeman is also in MIT's Department of Electrical Engineering and Computer Science and the Massachusetts Eye and Ear Infirmary.

It has been known for over half a century that inside the cochlea sound waves are translated into up-and-down waves that travel along a structure called the basilar membrane. But the team has now found that a different kind of wave, a traveling wave that moves from side to side, can also carry sound energy. This wave moves along the tectorial membrane, which is situated directly above the sensory hair cells that transmit sounds to the brain. This second wave mechanism is poised to play a crucial role in delivering sound signals to these hair cells.

In short, the ear can mechanically translate sounds into two different kinds of wave motion at once. These waves can interact to excite the hair cells and enhance their sensitivity, "which may help explain how we hear sounds as quiet as whispers," says Aranyosi. The interactions between these two wave mechanisms may be a key part of how we are able to hear with such fidelity - for example, knowing when a single instrument in an orchestra is out of tune.

"We know the ear is enormously sensitive" in its ability to discriminate between different kinds of sound, Freeman says. "We don't know the mechanism that lets it do that." The new work has revealed "a whole new mechanism that nobody had thought of. It's really a very different way of looking at things."

The tectorial membrane is difficult to study because it is small (the entire length could fit inside a one-inch piece of human hair), fragile (it is 97 percent water, with a consistency similar to that of a jellyfish), and nearly transparent. In addition, sound vibrations cause nanometer-scale displacements of cochlear structures at audio frequencies. "We had to develop an entirely new class of measurement tools for the nano-scale regime," Ghaffari says.

The team learned about the new wave mechanism by suspending an isolated piece of tectorial membrane between two supports, one fixed and one moveable. They launched waves at audio frequencies along the membrane and watched how it responded by using a stroboscopic imaging system developed in Freeman's lab. That system can measure nanometer-scale displacements at frequencies up to a million cycles per second.

The team's discovery has implications for how we model cochlear mechanisms. "In the long run, this could affect the design of hearing aids and cochlear implants," says Ghaffari. The research also has implications for inherited forms of hearing loss that affect the tectorial membrane. Previous measurements of cochlear function in mouse models of these diseases "are consistent with disruptions of this second wave," Aranyosi adds.

Because the tectorial membrane is so tiny and so fragile, people "tend to think of it as something that's wimpy and not important," Freeman says. "Well, it's not wimpy at all." The new discovery "that it can transport energy throughout the cochlea is very significant, and it's not something that's intuitive."

This research was funded by the National Institutes of Health.