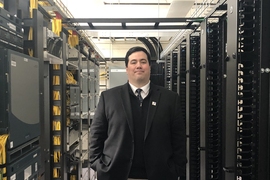 Mark Silis has been appointed MIT’s vice president for information systems and technology, effective March 1. A 15-year veteran of IS&T, Silis has served as associate vice president since 2015.

The appointment was announced today in an email to MIT faculty and staff from Executive Vice President and Treasurer Israel Ruiz.

“This wealth of experience has given Mark a deep appreciation and understanding of the MIT culture, and he brings in-depth technical knowledge, operational strength, and exceptional leadership skills to the position of VP,” Ruiz wrote. “He has demonstrated an unwavering dedication to the IS&T organization and enduring commitment to MIT through a period of significant change.”

Over the past several years, IS&T has embraced a “cloud-first” strategy to rapidly provide MIT with the benefits of the broader IT industry transition to cloud computing models. This recent evolution of the IS&T portfolio has seen the introduction of new services such as Dropbox, Duo, CrashPlan, and Tableau, and the migration of IS&T’s data centers to the cloud. One of IS&T’s major achievements during this period was the migration of many elements of MIT’s infrastructure portfolio to the cloud, including approximately 3,000 servers and the core SAP administrative infrastructure supporting the Institute’s financial, human resources, and facilities business processes.

“We have made an ambitious effort as an organization to embrace the cloud and adopt new ways of doing things, as the opportunities in our industry shift,” Silis says. “MIT has been leading the way in the higher education community in terms of embracing those opportunities, and our staff has done a tremendous job in helping MIT realize the benefits from this unique moment in the evolution of IT.”

As vice president, Silis will lead IS&T in delivering technology systems and services to the MIT community in support of the Institute’s education, research, and administrative programs. He will alo work with the Information Technology Governance Committee on the development of information technology policy at MIT.

“People can often see the rapid pace of technology change as daunting, but MIT embraces it as a force for good, for the advancement of society, and as an opportunity for what we can learn and new problems we can solve,” Silis says. “I consider myself a problem solver by trade, and this new role is an incredible opportunity to be part of that great problem-solving tradition that is MIT, and support MIT as technology becomes an increasingly embedded element in all our activities.”

Silis succeeds John Charles, who headed IS&T from 2013 until he retired in 2018.

Ruiz expressed his gratitude to Associate Provost Krystyn Van Vliet and Deputy Executive Vice President Anthony Sharon for leading the search, and to all of the members of the search committee for their dedication and service.

Letter regarding the retirement of John Charles, vice president for information systems and technology