Using light to generate order in an exotic material 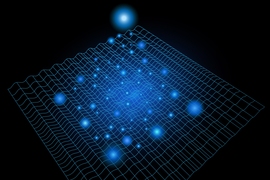 ↓ Download Image
Caption: An artist's impression of a light-induced charge density wave (CDW). The wavy mesh represents distortions of the material’s lattice structure caused by the formation of CDWs. Glowing spheres represent photons. In the center, the original CDW is suppressed by a brief pulse of laser light, while a new CDW appears at right angles to the first.
Credits: Image: Alfred Zong

Caption:
An artist's impression of a light-induced charge density wave (CDW). The wavy mesh represents distortions of the material’s lattice structure caused by the formation of CDWs. Glowing spheres represent photons. In the center, the original CDW is suppressed by a brief pulse of laser light, while a new CDW appears at right angles to the first.
Credits:
Image: Alfred Zong

Adding energy to any material, such as by heating it, almost always makes its structure less orderly. Ice, for example, with its crystalline structure, melts to become liquid water, with no order at all.

But in new experiments by physicists at MIT and elsewhere, the opposite happens: When a pattern called a charge density wave in a certain material is hit with a fast laser pulse, a whole new charge density wave is created — a highly ordered state, instead of the expected disorder. The surprising finding could help to reveal unseen properties in materials of all kinds.

The experiments made use of a material called lanthanum tritelluride, which naturally forms itself into a layered structure. In this material, a wavelike pattern of electrons in high- and low-density regions forms spontaneously but is confined to a single direction within the material. But when hit with an ultrafast burst of laser light — less than a picosecond long, or under one trillionth of a second — that pattern, called a charge density wave or CDW, is obliterated, and a new CDW, at right angles to the original, pops into existence.

This new, perpendicular CDW is something that has never been observed before in this material. It exists for only a flash, disappearing within a few more picoseconds. As it disappears, the original one comes back into view, suggesting that its presence had been somehow suppressed by the new one.

Gedik explains that in ordinary materials, the density of electrons within the material is constant throughout their volume, but in certain materials, when they are cooled below some specific temperature, the electrons organize themselves into a CDW with alternating regions of high and low electron density. In lanthanum tritelluride, or LaTe3, the CDW is along one fixed direction within the material. In the other two dimensions, the electron density remains constant, as in ordinary materials.

The perpendicular version of the CDW that appears after the burst of laser light has never before been observed in this material, Gedik says. It “just briefly flashes, and then it’s gone,” Kogar says, to be replaced by the original CDW pattern which immediately pops back into view.

Gedik points out that “this is quite unusual. In most cases, when you add energy to a material, you reduce order.”

“It’s as if these two [kinds of CDW] are competing — when one shows up, the other goes away,” Kogar says. “I think the really important concept here is phase competition.”

The idea that two possible states of matter might be in competition and that the dominant mode is suppressing one or more alternative modes is fairly common in quantum materials, the researchers say. This suggests that there may be latent states lurking unseen in many kinds of matter that could be unveiled if a way can be found to suppress the dominant state. That is what seems to be happening in the case of these competing CDW states, which are considered to be analogous to crystal structures because of the predictable, orderly patterns of their subatomic constituents.

Normally, all stable materials are found in their minimum energy states — that is, of all possible configurations of their atoms and molecules, the material settles into the state that requires the least energy to maintain itself. But for a given chemical structure, there may be other possible configurations the material could potentially have, except that they are suppressed by the dominant, lowest-energy state.

“By knocking out that dominant state with light, maybe those other states can be realized,” Gedik says. And because the new states appear and disappear so quickly, “you can turn them on and off,” which may prove useful for some information processing applications.

The possibility that suppressing other phases might reveal entirely new material properties opens up many new areas of research, Kogar says. “The goal is to find phases of material that can only exist out of equilibrium,” he says — in other words, states that would never be attainable without a method, such as this system of fast laser pulses, for suppressing the dominant phase.

Gedik adds that “normally, to change the phase of a material you try chemical changes, or pressure, or magnetic fields. In this work, we are using light to make these changes.”

The new findings may help to better understand the role of phase competition in other systems. This in turn can help to answer questions like why superconductivity occurs in some materials at relatively high temperatures, and may help in the quest to discover even higher-temperature superconductors.Gedik says, “What if all you need to do is shine light on a material, and this new state comes into being?”

The work was supported by the U.S. Department of Energy, SLAC National Accelerator Laboratory, the Skoltech-MIT NGP Program, the Center for Excitonics, and the Gordon and Betty Moore Foundation.