3Q: Scientists shave estimate of neutrino’s mass in half

Joseph Formaggio explains the discovery that the ghostly particle must be no more than 1 electronvolt, half as massive as previously thought.
Jennifer Chu | MIT News Office
Publication Date:
Press Inquiries 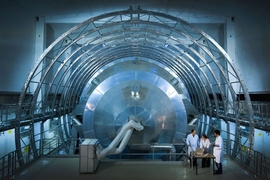 ↓ Download Image
Caption: KATRIN’s spectrometer, shown here, precisely measures the energy of electrons emitted in the decay of tritium, which has helped scientists come closer to pinning down the mass of the ghost-like neutrino.
Credits: Image: The KATRIN Collaboration

Caption:
KATRIN’s spectrometer, shown here, precisely measures the energy of electrons emitted in the decay of tritium, which has helped scientists come closer to pinning down the mass of the ghost-like neutrino.
Credits:
Image: The KATRIN Collaboration

An international team of scientists, including researchers at MIT, has come closer to pinning down the mass of the elusive neutrino. These ghost-like particles permeate the universe and yet are thought to be nearly massless, streaming by the millions through our bodies while leaving barely any physical trace.

The new estimate was determined based on data taken by KATRIN, the Karlsruhe Tritium Neutrino Experiment, at the Karlsruhe Institute of Technology in Germany, and reported at the 2019 Conference on Astroparticle and Underground Physics last week. The experiment triggers tritium gas to decay, which in turn releases neutrinos, along with electrons. While the neutrinos  are quick to dissipate, KATRIN’s sequence of magnets directs tritium’s electrons into the the heart of the experiment — a giant 200-ton spectrometer, where the electrons’ mass and energy can be measured, and from there, researchers can calculate the mass of the corresponding neutrinos.

Joseph Formaggio, professor of physics at MIT, is a leading member of the KATRIN experimental group, and spoke with MIT News about the new estimate and the road ahead in the neutrino search.

Q: The neutrino, based on KATRIN’s findings, can’t be more massive than 1 electron volt. Put this context for us: How light is this, and how big a deal is it that the neutrino’s maximum mass could be half of what people previously thought?

A: Well, that’s somewhat of a difficult question, since people (myself included) don’t really have an intuitive sense of what the mass is of any particle, but let’s try. Consider something very small, like a virus. Each virus is made up of roughly 10 million protons. Each proton weighs about 2,000 times more than each electron inside that virus. And what our results showed is that the neutrino has a mass less than 1/ 500,000 of a single electron!

Let me put it another way. In each cubic centimeter of space around you, there are about 300 neutrinos zipping through. These are remnants of the early universe, just after the Big Bang. If you added up all the neutrinos residing inside the sun, you’d get about a kilogram or less. So, yeah, it’s small.

Q: What went into determining this new mass limit for the neutrino, and what was MIT’s role in the search?

A: This new mass limit comes from studying the radioactive decay of tritium, an isotope of hydrogen. When tritium decays, it produces a helium-3 ion, an electron, and an antineutrino. We actually never see the antineutrino, however; the electron carries information about the neutrino’s mass. By studying the energy distribution of the electrons ejected at the highest energies allowed, we can deduce the mass of the neutrino, thanks to Einstein’s equation, E=mc2.

However, studying those high-energy electrons is very difficult. For one thing, all the information about the neutrino is embedded in a tiny fraction of the spectrum — less than 1 billionth of decays are of use for this measurement. So, we need a lot of tritium inventory. We also need to measure the energy of those electrons very, very precisely. This is why the KATRIN experiment is so tricky to build. Our very first measurement presented today is the culmination of almost two decades of hard work and planning.

MIT joined the KATRIN experiment when I came to Boston in 2005. Our group helped develop the simulation tools to understand the response of our detector to high precision. More recently, we have been involved in developing tools to analyze the data collected by the experiment.

Q: Why does the mass of a neutrino matter, and what will it take to zero in on its exact mass?

A: The fact that neutrinos have any mass at all was a surprise to many physicists. Our earlier models predicted that the neutrino should have exactly zero mass, an assumption dispelled by the discovery that neutrinos oscillate between different types. That means we do not really understand the mechanism responsible for neutrino masses, and it is likely to be very different than how other particles attain mass. Also, our universe is filled with primordial neutrinos from the Big Bang. Even a tiny mass has a significant impact on the structure and evolution of the universe because they are so aplenty.

This measurement represents just the beginning of KATRIN’s measurement. With just about one month of data, we were able to improve previous experimental limits by a factor of two. Over the next few years, these limits will steadily improve, hopefully resulting in a positive signal (rather than just a limit). There are also a number of other direct neutrino mass experiments on the horizon that are also competing to reach greater sensitivity, and with it, discovery!

Prof. Joseph Formaggio speaks with Clara Moskowitz of Scientific American about how an international team of researchers (including MIT scientists) has found that a neutrino cannot weigh more than one electron volt. “Neutrinos seem to have broken our understanding of what the Standard Model was supposed to be,” says Formaggio.

3 Questions: Pinning down a neutrino’s mass