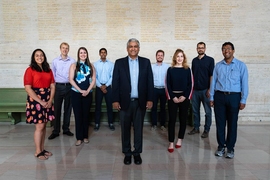 What do graduate students in engineering want?

This was the question before a new advisory group launched by the MIT School of Engineering in late 2017 — the school’s first comprised entirely of graduate students. This fall the group is rolling out its inaugural initiatives: a graduate-level leadership minor or certificate and a set of recommendations intended to improve advisor-advisee relations.

GradSAGE (short for Graduate Student Advisory Group for Engineering) was established by Anantha Chandrakasan just months after he became dean of the MIT School of Engineering.

“I thought it would be great to get student engagement as we shaped new initiatives, and to learn their perspectives on important issues and challenges they face,” says Chandrakasan. “In a sense, we are listening to our customers.”

The dean already counted department heads and other school stakeholders among his advisors. But Chandrakasan, the Vannevar Bush Professor of Electrical Engineering and Computer Science, felt he was missing the voice of students.

“The beauty of this group is that the students came up with a list of topics and priorities for us to focus on,” Chandrakasan says. “This was an opportunity for them to tell me what was most important, and while I wasn’t surprised by their choices, I was surprised by how passionately they felt about these areas.”

The very first gathering of GradSAGE, on Dec. 5, 2017, was like “a brainstorming-schmooze session,” recalls Parker Vascik, a fifth-year graduate student in aeronautics and astronautics (AeroAstro). “But we quickly moved toward identifying specific topics where we felt we could make significant changes in the academic culture and environment.”

One topic that immediately seized the interest of the group involved expanded opportunities to learn and practice leadership abilities.

“Grad students come to MIT hoping to have an impact on the world, and they are probably in the top 1 percent in terms of technical skills,” says Lucio Milanese, a fourth-year graduate student in nuclear science and engineering. “But there are nontechnical skills, soft skills, that are essential to communicating ideas and managing people that are just as important in solving really important problems.”

“There is an ocean of knowledge to acquire around teamwork — giving and receiving feedback, conflict resolution, growth mindset, that the basic graduate school curriculum doesn’t address,” says Dhanushkodi Mariappan, a fourth-year graduate student in mechanical engineering. After working in industry and launching his own startup before grad school, Mariappan felt strongly about what was needed.

“A formal leadership program could propel MIT graduate students in their careers, whether they are interested in taking on jobs in industry or in academia, where in some sense they will be running labs or research groups that are like little companies.”

“The class was eye-opening,” says Mariappan, “We were introduced to frameworks that can be applied to solve problems in an incredible range of real-world situations.” It was a course with a blueprint for the kind of curriculum GradSAGE hoped to advance, so Mariappan recruited Niño to the effort.

“To achieve something great in engineering takes a team, but engineers often don’t know how to develop a vision, recruit a talented team, facilitate group decisions, negotiate, delegate, and lead everyone in the same direction,” says Niño, who now works closely with GradSAGE. “Our courses involve practice of these leadership skills, so students can continue to evolve after graduation, and apply these over a lifetime.”

As a result of this collaboration, a new option for satisfying a doctoral minor requirement draws on GEL’s classes, including new ones offered this fall that can serve as cornerstones for the minor: 6.S978 (Negotiation and Influence Skills for Technical Leaders) and 6.S976 (Engineering Leadership in the Age of Artificial Intelligence). Students whose doctoral programs do not permit a minor can instead pursue the GEL Leadership Certificate, which will be launched in the spring of 2020. Leadership classes taken before then will be retroactively recognized and can count toward the certificate.

“We envision hundreds of graduate students pursuing some sort of leadership development experience —not just in the school of engineering but in the other MIT schools,” says Milanese. “In 10 to 15 years, we want employers to recognize a unique brand of MIT leadership and value MIT graduate students as nearly universally possessing outstanding leadership skills.”

The second major thrust of GradSAGE focused on an aspect of graduate life universally acknowledged as critical.

“Advisor-advisee relations arose in every single GradSAGE discussion as a root issue for nearly everything graduates experience, from mental health to taking on leadership opportunities,” says Vascik. “Graduate students have a very special relationship with one person who is boss, mentor, and a little bit of family, and this person guides your destiny while you’re here.”

“Most problems between advisors and students boil down to two issues: poor advisor-advisee fit and poor communication,” according to Jessica Boles, who is starting her third year as a graduate student in electrical engineering and computer science (EECS).

“Many students arrive at MIT thinking, ‘Here is a field I’d like to work in, here’s a prominent person in the field I’d like to work with,’” says Boles. “But there are lots of other things to consider: Who will directly mentor them, what’s the work environment like, what are the advisor’s expectations and policies?”

From informal surveys, Boles and her GradSAGE colleagues knew that an unclear understanding of an advisor’s standards and styles could lead to friction, disappointment, stress, lab-switching, and sometimes even departure from MIT.

Different professors have starkly different approaches to dealing with their graduate students, notes Vascik. “One might like to see students three times a week and micromanage research, while another wants to get together once per semester,” he says. “Factors such as these can dramatically shape a student’s experience in graduate school, and we believe these styles and expectations should be communicated to incoming and current students more effectively.”

Approaching the challenge like engineers, the GradSAGE students developed flow charts of specific advisor-advisee problems, interviewed faculty, reviewed literature, and derived a set of potential mitigations. They ran their proposals by the Office of Graduate Education, MIT Chancellor Cynthia Barnhart, MIT Vice Chancellor Ian Waitz, and then presented their recommendations to Chandrakasan. In a matter of months, the group had approval to pilot several initiatives.

Among these efforts: requesting advisors to post online brief statements about their philosophies and policies related to research advising (an effort now being explored within the AeroAstro and EECS departments); and centralizing and publicizing resources for graduate students who encounter difficulties with their advisors. In addition, Boles produced a video that details the kinds of questions admitted students should consider during the graduate school selection process, which she unveiled online to admitted EECS students just prior to MIT's visit weekend last spring.

“It was well-received, especially among the populations of students we really hope to reach: international students, underrepresented minorities, and students without prior graduate school experience,” she says. “So many more students sought information on the roles advisors would play in their research and career, and on the work environments in potential research labs, including expectations around publications, work hours, and group interactions.” A new, enhanced video is in the works intended for all incoming engineering graduate students.

“Our goal is to increase transparency of advising style so we can ensure better advisor-advisee fits from the beginning,” says Boles. Down the line, adds Vascik, this work could translate to reduced stress among graduate students, fewer students switching labs, and more cohesive and productive labs. “Prospective students stand to benefit the most, because with online information, and their ability to ask smart questions, they will have a good sense before they arrive of what awaits them here.”

For both the advising and leadership GradSAGE ventures, this fall marks just the start of a longer process. Growing these programs will take both time and money, which Chandrakasan seems intent to provide. “What we have done so far is expose important issues, and now it’s a matter of actually converting them into actionable items, which we must do,” he says.

Jesús Dones-Monroig: Creating space for everyone in chemistry

Caring for her community

3Q: Ian Waitz on progress in enhancing the undergraduate and graduate student experience