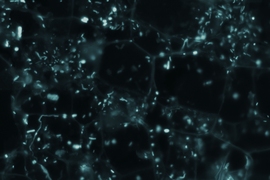 Identifying species among plants and animals has been a full-time occupation for some biologists, but the task is even more daunting for the myriad microbes that inhabit the planet. Now, MIT researchers have developed a simple measurement of gene flow that can define ecologically important populations among bacteria and archaea, including pinpointing populations associated with human diseases.

The gene flow metric separates co-existing microbes in genetically and ecologically distinct populations, Martin Polz, a professor of civil and environmental engineering at MIT, and colleagues write in the August 8 issue of Cell.

Polz and his colleagues also developed a method to identify parts of the genome in these populations that show different adaptations that can be mapped onto different environments. When they tested their approach on a gut bacterium, for instance, they were able to determine that different populations of the bacteria were associated with healthy individuals and patients with Crohn’s disease.

Biologists often call a group of plants or animals a species if the group is reproductively isolated from others — that is, individuals in the group can reproduce with each other, but they can’t reproduce with others. As a result, members of a species share a set of genes that differs from other species. Much of evolutionary theory centers on species and populations, the representatives of a species in a particular area.

But microbes “defy the classic species concept for plants and animals,” Polz explains. Microbes tend to reproduce asexually, simply splitting themselves in two rather than combining their genes with other individuals to produce offspring. Microbes are also notorious for “taking up DNA from environmental sources, such as viruses,” he says. “Viruses can transfer DNA into microbial cells and that DNA can be incorporated into their genomes.”

These processes make it difficult to sort coexisting microbes into distinct populations based on their genetic makeup. “If we can’t identify those populations in microbes, we can’t one-to-one apply all this rich ecological and evolutionary theory that has been developed for plants and animals to microbes,” says Polz.

If researchers want to measure an ecosystem’s resilience in the face of environmental change, for instance, they might look at how populations within species change over time. “If we don’t know what a species is, it’s very difficult to measure and assess these types of perturbations,” he adds.

Christopher Marx, a microbiologist at the University of Idaho who was not part of the Cell study, says he and his colleagues “will immediately apply” the MIT researchers’ approach to their own work. “We can use this to answer the question, ‘What should we define as an ecologically important unit?’”

A yardstick for gene flow

Martin and his colleagues decided to look for another way to define ecologically meaningful populations in microbes. Led by microbiology graduate student Philip Arevalo, the researchers developed a metric of gene flow that they called PopCOGenT (Populations as Clusters Of Gene Transfer).

PopCOGenT measures recent gene flow or gene transfer between closely related genomes. In general, microbial genomes that have exchanged DNA recently should share longer and more frequent stretches of identical DNA than if individuals were just reproducing by splitting their DNA in two. Without this sort of recent exchange, the researchers suggested, the length of these shared stretches of identical DNA would shorten as mutations insert new “letters” into the stretch.

Two microbial strains that are not genetically identical to each other but share sizable “chunks” of identical DNA are probably exchanging more genetic material with each other than with other strains. This gene flow measurement can define distinct microbial populations, as the researchers discovered in their tests of three different kinds of bacteria.

In Vibrio bacteria, for instance, closely related populations may share some core gene sequences, but they appear completely isolated from each other when viewed through this measurement of recent gene flow, Polz and colleagues found.

Polz says that the PopCOGenT method may work better at defining microbial populations than previous studies because it focuses on recent gene flow among closely related organisms, rather than including gene flow events that may have happened thousands of years in the past.

The method also suggests that while microbes are constantly taking in different DNA from their environment that might obscure patterns of gene flow, “it may be that this divergent DNA is really removed by selection from populations very quickly,” says Polz.

Microbiology graduate student David VanInsberghe then suggested a “reverse ecology” approach that could identify regions of the genome in these newly defined populations that show “selective sweeps” — places where DNA variation is reduced or eliminated, likely as a result of strong natural selection for a particular beneficial genetic variant.

By identifying specific sweeps within populations, and mapping the distribution of these populations, the method can reveal possible adaptations that drive microbes to inhabit a particular environment or host — without any prior knowledge of their environment. When the researchers tested this approach in the gut bacterium Ruminococcus gnavus, they uncovered separate populations of the microbe associated with healthy people and patients with Crohn’s disease.

Polz says the reverse ecology method is likely to be applied in the near future to studying the full diversity of the bacteria that inhabit the human body. “There is a lot of interest in sequencing closely related organisms within the human microbiome and looking for health and disease associations, and the datasets are growing.”

He hopes to use the approach to examine the “flexible genome” of microbes. Strains of E. coli bacteria, for instance, share about 40 percent of their genes in a “core genome,” while the other 60 percent — the flexible part — varies between strains. “For me, it’s one of the biggest questions in microbiology: Why are these genomes so diverse in gene content?” Polz explains. “Once we can define populations as evolutionary units, we can interpret gene frequencies in these populations in light of evolutionary processes.”

Polz and colleagues’ findings could increase estimates of microbe diversity, says Marx. “What I think is really cool about this approach from Martin’s group is that they actually suggest that the complexity that we see is even more complex than we’re giving it credit for. There may be even more types that are ecologically important out there, things that if they were plants and animals we would be calling them species.”

Other MIT authors on the paper include Joseph Elsherbini and Jeff Gore. The research was supported, in part, by the National Science Foundation and the Simons Foundation.

New type of virus found in the ocean

In search of the fundamental laws of microecology