New type of virus found in the ocean 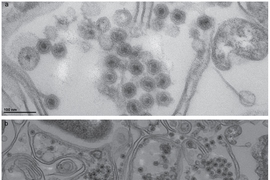 ↓ Download Image
Caption: Electron microscope images of marine bacteria infected with the non-tailed viruses studied in this research. The bacterial cell walls are seen as long double lines, and the viruses are the small round objects with dark centers. 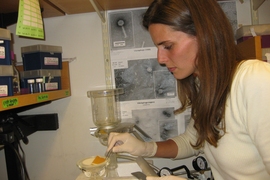 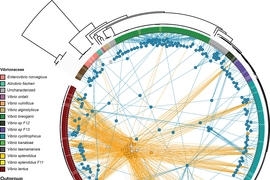 Caption:
Electron microscope images of marine bacteria infected with the non-tailed viruses studied in this research. The bacterial cell walls are seen as long double lines, and the viruses are the small round objects with dark centers.

A type of virus that dominates water samples taken from the world’s oceans has long escaped analysis because it has characteristics that standard tests can’t detect. However, researchers at MIT and the Albert Einstein College of Medicine have now managed to isolate and study representatives of these elusive viruses, which provide a key missing link in virus evolution and play an important role in regulating bacterial populations, as a new study reports.

Viruses are the main predators of bacteria, and the findings suggest that the current view of bacterial virus diversity has a major blind spot. These conclusions have emerged through detailed analysis of marine samples led by MIT postdoc Kathryn Kauffman, professor of civil and environmental engineering Martin Polz, professor Libusha Kelly of Albert Einstein College of Medicine, and nine others. The results are being reported this week in the journal Nature.

The newly identified viruses lack the “tail” found on most catalogued and sequenced bacterial viruses, and have several other unusual properties that have led to their being missed by previous studies. To honor that fact, the researchers named this new group the Autolykiviridae — after a character from Greek mythology who was storied for being difficult to catch. And, unlike typical viruses that prey on just one or two types of bacteria, these tailless varieties can infect dozens of different types, often of different species, underscoring their ecological relevance.

This research “opens new avenues for furthering our understanding of the roles of viruses in the ocean,” says Jed Fuhrman, the McCulloch-Crosby Chair of Marine Biology at the University of Southern California, who was not involved in this work. “In a practical sense, it also shows how we need to alter some commonly used methods in order to capture these kinds of viruses for various studies,” he says. “I’d say it is an important advance in the field.”

Current environmental models of virus-bacteria interactions are based on the well-studied tailed viruses, Kauffman explains, so they may be missing important aspects of the interactions taking place in nature.

“We already knew that viruses are very important there,” Kauffman says, referring to the surface ocean, where the researchers’ samples were drawn, and where about 10 million viruses are found in every milliliter of water. Polz says that while “most of the viruses studied in labs have tails, most of those in the ocean don’t.” So the team decided to study one subset of tailless viruses, which infects a group of bacteria called Vibrio. After extensive tests, they found “that some of these were infecting unusually large numbers of hosts,” he says.

After sequencing representatives of the Autolykiviridae, the researchers found “their genomes were quite different from other viruses,” Polz says. For one thing, their genomes are very short: about 10,000 bases, compared to the typical 40,000-50,000 for tailed viruses. “When we found that, we were surprised,” he says.

With the new sequence information, the researchers were able to comb through databases and found that such viruses exist in many places. The research also showed that these viruses tend to be underrepresented in databases because of the ways samples are typically handled in labs. The methods the team developed to obtain these viruses from environmental samples could help researchers avoid such losses of information in the future. In addition, Kauffman says, typically the way researchers test for viral activity is by infecting bacteria with the viral sample and then checking the samples a day later to look for signs that patches of the bacteria have been killed off. But these particular nontailed viruses often act more slowly, and the killed-off regions don’t show up until several days have passed — so their presence was never noticed in most studies.

The new group of viruses may especially be widespread. “We don’t think it’s ocean-specific at all,” Polz says. For example, the viruses may even be prevalent in the human biome, and they may play roles in major biogeochemical cycles, he says, such as the cycling of carbon.

Another important aspect of theses findings is that the Autolykiviridae were shown to be  members of an ancient viral lineage that is defined by specific types of capsids, the protein shell encasing the viral DNA. Though this lineage is known to be very diverse in animals and protists — and includes viruses such as the adenoviruses that infect humans, and the giant viruses that infect algae — very few viruses of this kind have been found to infect bacteria.

“This work substantially changes the existing ideas on the composition of the ocean virome by showing that the content of small, tailless viruses … is comparable to that of the tailed viruses … that are currently thought to dominate the virosphere,” says Eugene V. Koonin, a senior investigator at the National Institutes of Health, who was not involved in this research. “This work is important also for understanding the evolution of the virus world because it shows that viruses related to the most common viruses of eukaryotes (such as adenoviruses, poxviruses, and others), at least in terms of the capsid structure, are much wider-spread in prokaryotes than previously suspected.”

Koonin adds, “I further wonder whether the viruses reported here might only represent the tip of the proverbial iceberg, because capsid proteins can be highly diverged in sequence so that many are missed even in sensitive database searches. The findings are also of practical importance because the tailless viruses appear to play a major ecological role in the ocean, being responsible for a substantial fraction of bacteria-killing.”

The work was supported by the National Science Foundation and the Woods Hole Oceanographic Institution’s Ocean Ventures Fund.

MIT researchers have discovered a new family of viruses in the ocean that appears to play a key role in ocean ecosystems and could help provide insights on how viruses evolve, reports Marin Finucane for The Boston Globe.  Finucane explains that the findings could also lead to, "a better understanding of human biology.”