Chemists glimpse the fleeting “transition state” of a reaction 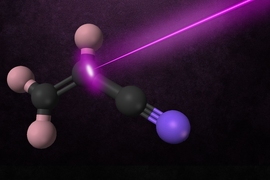 ↓ Download Image
Caption: MIT chemists have devised a way to observe the transition state of the chemical reaction that occurs when vinyl cyanide is broken apart by an ultraviolet laser.
Credits: Image: Christine Daniloff, MIT

Caption:
MIT chemists have devised a way to observe the transition state of the chemical reaction that occurs when vinyl cyanide is broken apart by an ultraviolet laser.
Credits:
Image: Christine Daniloff, MIT

During a chemical reaction, the molecules involved in the reaction gain energy until they reach a “point of no return” known as a transition state.

Until now, no one has glimpsed this state, as it lasts for only a few femtoseconds (quadrillionths of a second). However, chemists at MIT, Argonne National Laboratory, and several other institutions have now devised a technique that allows them to determine the structure of the transition state by detailed observation of the products that result from the reaction.

“We’re looking at the consequences of the event, which have encoded in them the actual structure of the transition state,” says Robert Field, the Robert T. Haslam and Bradley Dewey Professor of Chemistry at MIT. “It’s an indirect measurement, but it’s among the most direct classes of measurement that have been possible.”

Field and his colleagues used millimeter-wave spectroscopy, which can measure the rotational-vibrational energy of reaction product molecules, to determine the structure of the products of the breakdown of vinyl cyanide caused by ultraviolet light. Using this approach, they identified two different transition states for the reaction and found evidence that additional transition states may be involved.

Field is the senior author of the study, which appears this week in the Proceedings of the National Academy of Sciences. The lead author is Kirill Prozument, a former MIT postdoc who is now at Argonne National Laboratory.

A central concept of chemistry

For any chemical reaction to occur, the reacting molecules must receive an input of energy that enables the activated molecules to reach a transition state, from which the products are formed.

In a paper published in 2015, Field and his colleagues used laser spectroscopy to characterize the transition state for a different type of reaction known as an isomerization, in which a molecule undergoes a change of shape.

In their new study, the researchers explored another style of reaction, using ultraviolet laser radiation to break molecules of vinyl cyanide into acetylene and other products. Then, they used millimeter-wave spectroscopy to observe the vibrational level population distribution of the reaction products a few millionths of a second after the reaction occurred.

Using this technique, the researchers were able to determine nascent populations of molecules in different levels of vibrational energy — a measure of how much the atoms of a molecule move relative to each other. Those vibrational energy levels also encode the geometry of the molecules when they were born at the transition state, specifically, how much bending excitation there is in the bond angles between hydrogen, carbon, and nitrogen atoms.

This also allowed the researchers to distinguish between two slightly different products of the reaction — hydrogen cyanide (HCN), in which a central carbon atom is bound to hydrogen and nitrogen, and hydrogen isocyanide (HNC), in which nitrogen is the central atom, bound to carbon and hydrogen.

“This is the fingerprint of what the structure was during the instant that the molecule was released,” Field says. “Previous methods of looking at reactions were blind to the vibrational populations, and they were blind to the difference between HCN and HNC.”

The researchers found both HCN and HNC, which are produced via different transition states, among the reaction products. This suggests that both of those transition states, which represent different mechanisms of reaction, are in play when vinyl cyanide is broken apart by the ultraviolet laser.

“This implies that there are two different mechanisms competing for transition states, and we’re able to separate the reaction into these different mechanisms,” Field says. “This is a completely new technique, a new way of going to the heart of what happens in a chemical reaction.”

The new technique allows scientists to explore the transition state in a way that has previously not been possible, says Arthur Suits, a professor of chemistry at the University of Missouri.

“In this work, the researchers use the powerful new technique of broadband rotational spectroscopy to monitor the nascent vibrational distributions of the products of a photodissociation reaction, thereby gaining deep insight into two different transition states,” says Suits, who was not involved in the study. “Broadband rotational spectroscopy continues to amaze us with unexpected applications such as this glimpse of the elusive transition, and other exciting advances driven by this technique are no doubt on the way.”

The researchers’ data shows that there are additional reaction mechanisms beyond those two, but more study is needed to determine their transition state structures.

Field and Prozument are now using this technique to study the reaction products of the pyrolytic breakdown of acetone. They also hope to use it to explore how triazine, a six-membered ring of alternating carbon and nitrogen atoms, breaks down into three molecules of HCN, in particular, whether all three products form simultaneously (a “triple whammy”) or sequentially.

The research was funded by the Department of Energy, the Petroleum Research Fund, and the National Science Foundation. Other authors of the paper include Joshua Baraban PhD ’13 of Ben-Gurion University; G. Barratt Park PhD ’15 of the Max Planck Institute for Biophysical Chemistry; Rachel Shaver SM ’13; P. Bryan Changala of the University of Colorado at Boulder; John Muenter of the University of Rochester; Stephen Klippenstein of Argonne National Laboratory; and Vladimir Chernyak of Wayne State University.

MIT chemists characterize a chemical state thought to be unobservable