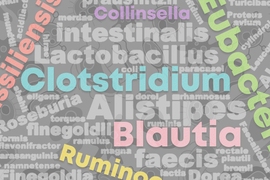 The human digestive tract is home to thousands of different strains of bacteria. Many of these are beneficial, while others contribute to health problems such as inflammatory bowel disease. Researchers from MIT and the Broad Institute have now isolated and preserved samples of nearly 8,000 of these strains, while also clarifying their genetic and metabolic context.

This data set (BIO-ML), which is available to other researchers who want to use it, should help to shed light on the dynamics of microbial populations in the human gut and may help scientists develop new treatments for a variety of diseases, says Eric Alm, director of MIT’s Center for Microbiome Informatics and Therapeutics and a professor of biological engineering and of civil and environmental engineering at MIT.

“There’s a lot of excitement in the microbiome field because there are associations between these bacteria and health and disease. But we’re lacking in being able to understand why that is, what’s the mechanism, and what are the functions of those bacteria that are causing them to associate with disease,” says Alm, who is the senior author of the study.

The researchers collected stool samples from about 90 people, for up to two years, allowing them to gain insight into how microbial populations change over time within individuals. This study focused on people living in the Boston area, but the research team is now gathering a larger diversity of samples from around the globe, in hopes of preserving microbial strains not found in people living in industrialized societies.

“More than ever before, modern techniques allow us to isolate previously uncultured human gut bacteria. Exploring this genetic and functional diversity is fascinating — everywhere we look, we discover new things. I’m convinced that enriching biobanks with a large diversity of strains from individuals living diverse lifestyles is essential for future advancements in human microbiome research,” says Mathilde Poyet, a senior postdoc at MIT and one of the lead authors of the study.

MIT research associate Mathieu Groussin and former postdoc Sean Gibbons are also lead authors of the study, which appears in the Sept. 2 issue of Nature Medicine. Ramnik Xavier, a professor of medicine at Harvard Medical School and member of the Broad Institute, is a senior author of the study along with Alm.

Humans have trillions of bacterial cells in their digestive tracts, and while scientists believe that these populations change and evolve over time, there has been little opportunity to observe this. Through the OpenBiome organization, which collects stool samples for research and therapeutic purposes, Alm and his colleagues at MIT and the Broad Institute had access to fecal samples from about 90 people.

For most of their analysis, the researchers focused on microbes found in about a dozen individuals who had provided samples over an extended period, up to two years.

“That was a unique opportunity, and we thought that would be a great set of individuals to really try to dig down and characterize the microbial populations more thoroughly,” Alm says. “To date there hadn’t been a ton of longitudinal studies, and we wanted to make that a key focus of our study, so we could understand what the variation is day-to-day.”

The researchers were able to isolate a total of 7,758 strains from the six major phyla of bacteria that dominate the human GI tract. For 3,632 of these strains, the researchers sequenced their full genomes, and they also sequenced partial genomes of the remaining strains.

Analyzing how microbial populations changed over time within single hosts allowed the researchers to discover some novel interactions between strains. In one case, the researchers found three related strains of Bacteroides vulgatus coexisting within a host, all of which appeared to have diverged from one ancestor strain within the host. In another case, one strain of Turicibacter sanguinis completely replaced a related strain of the same species nearly overnight.

“This is the first time we’re getting a glimpse of these really different dynamics,” Alm says.

The researchers also measured the quantities of many metabolites found in the stool samples. This analysis revealed that variations in amino acid levels were closely linked with changes in microbial populations over time within a single person. However, differences between the composition of microbial populations in different people were more closely associated with varying levels of bile acids, which help with digestion.

The researchers don’t know exactly what produces these differences in amino acid and bile acid levels, but say they could be influenced by diet — a connection that they hope to investigate in future studies. They have also made all of their data available online and are offering samples of the strains of bacteria they isolated, allowing other scientists to study the functions of these strains and their potential roles in human health.

“Comprehensive and high-resolution collections of bacterial isolates open the possibility to mechanistically investigate how our lifestyle shapes our gut microbiome, metabolism, and inflammation. We aim to provide such a resource to the research community worldwide, including to lower-income research institutions,” Groussin says.

“It may be that as populations that have been living traditional lifestyles start to switch to a more industrialized lifestyle, they may lose a lot of that biodiversity. So one of the main things we want to do is conserve it, and then later we can go back and characterize it as well,” Alm says.

The research was funded by a Broad Next 10 grant from the Broad Institute.

3Q: Eric Alm on the mysteries of the microbiome