Planning for death, as a way to improve life 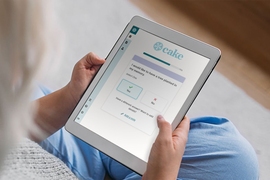 ↓ Download Image
Caption: Cake's end of life planning service breaks down what can be an overwhelming process into a series of simple questions to help people make decisions around health care treatments, funeral arrangements, estate planning, and how they want to be remembered after they’re gone.
Credits: Courtesy of Cake

Caption:
Cake's end of life planning service breaks down what can be an overwhelming process into a series of simple questions to help people make decisions around health care treatments, funeral arrangements, estate planning, and how they want to be remembered after they’re gone.
Credits:
Courtesy of Cake

Losing a loved one is always hard, but honoring their final wishes can provide a sense of fulfillment in the midst of grief. However, many people avoid thinking about their own death, even if they believe it’s a long way off, and thus don’t share their posthumous preferences with friends and family.

End-of-life planning startup Cake is trying to change that. The company is borne out of the idea that planning for death now can make things a lot easier for loved ones down the line.

Cake breaks down what can be an overwhelming process into a series of simple questions to help people make decisions around health care treatments, funeral arrangements, estate planning, and how they want to be remembered after they’re gone.

“Ignoring the fact that we’re all mortal is not helping anyone, and you can actually use the fact that life is finite as a positive and motivating force, and as a way to cultivate gratitude,” says Cake co-founder and CEO Suelin Chen ’03 SM ’07 PhD ’10.

Most people agree that the questions Cake asks have important answers, but those questions are often left to family and friends who must try their best to honor a loved one’s wishes. Among the many options Cake offers, users can decide who can make care decisions on their behalf, whether or not to get life insurance, what to do with their social media accounts after they’re gone, and who they want (or don’t want) at their funeral.

“The space and services are very fragmented, so we bring it all together in one place,” Chen says. “We say ‘Here are all the areas you want to think about,’ because people don’t know what they don’t know. We then guide you on the things you should be doing, store all of that online securely in your profile, and enable you to share it with the important people in your life.”

Chen says using Cake is a simple and thought-provoking experience that can give people peace of mind.

“People are really surprised that you can make a topic like death interesting and reflective, and also illuminating and positive,” Chen says. “What you want for end-of-life is actually just what is important to you in life. With the name Cake, we’re really trying to emphasize the fact that end-of-life planning is a positive act, a gift. You want to honor your life and the life of those you love. Cake is a symbol of celebrating life milestones, and even though losing someone is always hard, thinking about death in and of itself is not inherently negative.”

Cake has already partnered with life insurance companies, health care organizations, and financial institutions to offer its services to their customers. Now, it’s expanding to help individuals with their end-of-life plans. The progress is exciting for Chen, whose commitment to impact has led her down an unconventional path to entrepreneurship.

A researcher with a mission

In the 2000s, Chen spent nearly a decade at MIT earning her degrees, studying biology and biomedical engineering as an undergraduate before earning her master’s and PhD in MIT’s Department of Materials Science and Engineering. During that time, Chen never once took a business or entrepreneurship class.

“I had no aspirations to be an entrepreneur, but I wanted to have a positive impact on the world, and I thought health care was the best way to do that,” Chen says. “I also liked engineering, so I felt like the best way to use my skills was not to be a doctor, but to use engineering to solve problems in health care.”

After completing her PhD in 2010, Chen became the director of The Laboratory at Harvard, an interdisciplinary program that emphasizes learning through real-world experimentation, where she says she “caught the business bug.”

“Business is how you get these ideas into the world to touch real people and have a real impact,” Chen says.

In 2014, Chen decided to attend the MIT Hacking Medicine Grand Hack. When she registered for the event, she shared her idea of using technology to improve people’s circumstances around the end of their life. Also attending the event that day was Mark Zhang, a palliative care physician and technologist, who suggested to Chen they team up. The pair ended up winning first place, and continued researching ways to address people’s anxiety about planning for the end of life.

“Eventually we all die, and it didn’t really seem like anyone was paying attention to that,” Chen says. “It’s a part of the human experience that every single person goes through. Everyone experiences loss in their life, and I just kept coming back to, ‘Why is that experience still so bad even though we’re pouring so much money into the end of life, especially from a health care perspective?’”

Chen returned to MIT occasionally to get guidance from the Venture Mentoring Service, and she says her MIT ties have helped immensely in her transition from a researcher to a founder.

“I’ve emailed MIT [VMS] mailing lists many times, and I’m constantly talking to friends from MIT who are entrepreneurs,” Chen says. “So many of my classmates have started companies. When you’re an entrepreneur, having the MIT network is incredible.”

Thinking about life to plan for death

Chen and Zhang initially thought their service would be most useful for people closer to the end of their lives, but their early testing dispelled that idea.

“There’s really complex psychology about how people engage with their mortality, and just because you are close to death doesn’t mean you’re going to be amenable to thinking about it,” Chen says. “Conversely, young, healthy people were really interested in what we were doing.”

Chen says millennials are Cake’s second-biggest customer demographic. She guesses that’s because they are starting families, worried about aging parents, or are simply pragmatic and curious about their mortality. Also, instead of doing planning solely on paper, they may be expecting technology to help them with this task.

Indeed, Cake’s questions address major concerns, like ensuring protection for planners’ dependents, and matters that have more to do with personal taste, like whether or not loved ones should plant a tree in the planner’s memory. (Sixty-seven percent of respondents say yes.) Chen says one of the most popular topics is the kind of music planners’ want played at their funeral.

“We absolutely understand this is a hard topic for most people, so we are focused on getting the barrier to entry as low as possible, and getting people normalized to even thinking about death and dying,” Chen says. “What we’re trying to do is make it easier for people to think about what they’d want for end-of-life and to share that information with their loved ones, and also make it easier to know what their loved ones want.”

Chen did not disclose information on Cake’s enterprise customers or the number of people using its services, but she says someone answers a question about their end-of-life preferences every five minutes on Cake’s platform, which is free for users.

The momentum is a form of vindication for Chen, who as CEO has spent the last four years raising awareness of a topic that many people would prefer to ignore. In the midst of building Cake’s solution and securing early customers, with Chen immersed in the details of death, she also received a crash course in life, having two children who are both still under the age of three. She sees many parallels between how people enter and exit life, and believes that the same amount of thought and consideration should go into both events.

“[Cake] is about people getting a sense for what’s important to them in life and communicating that to their loved ones,” Chen says. “That’s what it’s all about.”