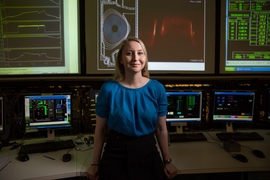 Anne White, associate professor of nuclear science and engineering and associate director of the Plasma Science and Fusion Center at MIT, has been named the new head of the Department of Nuclear Science and Engineering, effective July 1.

“Professor White is a brilliant researcher who has had a tremendous impact on students at MIT,” says Anantha Chandrakasan, dean of the MIT School of Engineering and the Vannevar Bush Professor of Electrical Engineering and Computer Science. “As a tireless ambassador and advocate for the potential of nuclear fusion as an energy source, she inspires our students and our research community. I look forward to working with her on the school’s leadership team.”

An international leader in assessing and refining the mathematical models used in fusion reactor design, White and the members of her research group develop diagnostic techniques that allow for simultaneous measurements of fluctuations in plasma density, and temperature in the core and edge of tokamak reactors, which are large toroidal devices in which plasmas reach temperatures higher 100 million degrees. She and her team hope to improve the understanding of how turbulence is suppressed and how the turbulent-transport of particles, energy, and momentum can be separated from one another — essential data in the development of fusion reactors.

White has taught a variety of courses at MIT, including graduate plasma physics, undergraduate electronics, and an advanced graduate course on the principles of plasma diagnostics, which attracts students from across the Institute and other local universities. She also helped team-teach the first offering of a new undergraduate course, 22.061 (Fusion Energy). Recently, White and a team of faculty led the development of a new MOOC on MITx covering nuclear science and engineering, 22.011x (Nuclear Science: Energy, Systems and Society), which was jointly offered online and on campus in spring 2019 as the new first-year seminar in NSE.

A past winner of the U.S. Department of Energy (DoE) Early Career Award, the American Physical Society Katherine E. Weimer Award, and the Fusion Power Associates Excellence in Fusion Engineering Award, White received a DoE ORISE Fusion Energy Science Fellowship, won the Marshall N. Rosenbluth Outstanding Doctoral Thesis Award, and was named a DoE Fusion Energy Postdoctoral Research Program Fellow and an APS Division of Plasma Physics distinguished lecturer. She is a member of the Division of Plasma Physics at the American Physical Society, and the American Nuclear Society. White is also a past recipient of the Junior Bose Award for Excellence in Teaching from the MIT School of Engineering and the PAI Outstanding Faculty Award, presented by the student chapter of the American Nuclear Society. She currently serves on the DoE Fusion Energy Sciences Advisory Committee and the advisory board for the Princeton Plasma Physics Laboratory.

White succeeds Dennis Whyte, who has been department head since 2015 and will remain director of MIT’s Plasma Science and Fusion Center. “Under Dennis’s leadership, NSE has implemented a range of innovative strategies to accelerate growth and development in recruiting, education, and research,” Chandrakasan noted in his email to the nuclear science community. “He has been a remarkable and committed leader for the department.”

Angela Belcher named head of the Department of Biological Engineering