Physicist has a fascination for the complexities of turbulence, and how to reduce it in fusion reactors.
David L. Chandler | MIT News Office
Publication Date:
Press Inquiries 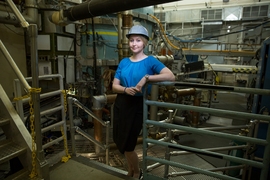 ↓ Download Image
Caption: “When I started in graduate school I knew already that I wanted to work on turbulence in tokamaks,” says Anne White, the Cecil and Ida Green Associate Professor in Nuclear Engineering in MIT’s Plasma Fusion and Science Center. 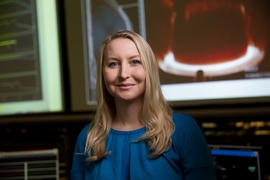 ↓ Download Image
Caption: “When I started in graduate school I knew already that I wanted to work on turbulence in tokamaks,” says Anne White, the Cecil and Ida Green Associate Professor in Nuclear Engineering in MIT’s Plasma Fusion and Science Center.
Credits: Photo: Bryce Vickmark

Caption:
“When I started in graduate school I knew already that I wanted to work on turbulence in tokamaks,” says Anne White, the Cecil and Ida Green Associate Professor in Nuclear Engineering in MIT’s Plasma Fusion and Science Center.
Credits:
Photo: Bryce Vickmark

Turbulence is an everyday phenomenon that we see in the curls of smoke rising from a fire or in the cream we stir into our morning coffee. But despite centuries of research, the details of how turbulent flows behave are still something of a mystery to scientists. Turbulence is also one of the most critical challenges remaining in the quest to make fusion, potentially a clean and almost limitless source of electricity, practical for generating power.

Anne White, the Cecil and Ida Green Associate Professor in Nuclear Engineering in MIT’s Plasma Fusion and Science Center, has been fascinated by the complexities of turbulence, and its critical role in sapping power from fusion reactors, since she was an undergraduate. Since coming to MIT, where she earned tenure last year, she has made important progress toward unraveling aspects of that mystery.

White grew up in the parched desert landscape of Yuma, Arizona, and completed her undergraduate work at the University of Arizona, in Tucson, and her doctorate at the University of California at Los Angeles. When she arrived in Cambridge to join the MIT faculty in 2010 it was quite a change, she recalls, to be in a place “where leafy green plants grow and water often falls from the sky!”

“When I started in graduate school I knew already that I wanted to work on turbulence in tokamaks,” she says, referring to the primary type of fusion reactor used in research, including MIT’s Alcator C-Mod, which is soon to be retired. In the donut-shaped cavities in these reactors, a soup of electrically charged atoms is heated and compressed by an intense magnetic field as it swirls around. This intense heat and pressure is needed to make atoms fuse together, providing the source of energy for fusion reactors, but turbulence in the form of hard-to-predict swirls and eddies can drain the heat away.

Understanding exactly how this turbulence develops, and how to reduce it, has been one of the thorniest challenges in the last few decades of fusion research.

But there have been “really exciting developments over the last two years,” White says. Her team has made use of three different fusion reactors, including MIT’s Alcator C-Mod, to understand the nature of the turbulence and associated transport. The combination of data and insights from multiple machines has made the conclusions much clearer than a single device could have provided, White says. “Right now our group has active projects on four tokamaks,” she says.

White became interested in fusion while studying nonlinear dynamics as a math major at the University of Arizona. She was doing a lot of reading about how to tackle the problems of climate change and quickly decided that nuclear sources, fission and fusion, were key technologies for addressing the issue. Her undergraduate advisor, who had been at Princeton University and was familiar with its tokamak fusion reactor, the TFTR, encouraged her to pursue that goal.

While in graduate school at UCLA, White first built devices called Langmuir probes and magnetic probes and inserted them in the edge of the tokamak plasma to study how properties of the plasma turbulence varied from the inboard to the outboard side of the tokamak. “This was a great experience, to jump into a research group, with little to no plasma physics knowledge and just start building instruments.” Likewise, White says she now encourages freshman or grad students to “just jump into” their Undergraduate Research Opportunities Programs (UROPs), or first year of research.

Later in grad school, White worked on another edge-plasma turbulence project at the NSTX tokamak at the Princeton Plasma Physics Lab. “I learned a great deal of plasma physics and also met a mentor and advocate, who has continued to be an inspiration to me,” she says. White encourages her own grad students to spend a summer away from the research group, perhaps doing an internship with another lab as a way to broaden their research and networking horizons.

It was her third and final project in grad school that really defined her future research path in transport model validation, she says. White developed a radiometer-based instrument for measuring the turbulent fluctuations in the electron temperature in the core region — deep inside the plasma, very far from the edge and plasma boundary. White explains that fusion scientists had focused quite a bit on measuring turbulence in the density fluctuations, but less attention had been paid to temperature fluctuations: “It's a harder measurement to make.” She provided the data to a collaborating group that could run very sophisticated simulations of the experimental set-up, which kick-started the ongoing theme of “transport model validation” in her research.

Even as a kid, White reflects, “I loved tinkering.” Over the years she would take apart and rebuild dirt bikes, motorcycles, and cars. Her parents, both lawyers, were “very encouraging” of her mechanical inclinations, she says. Their household was full of books, and any time she had a question, they encouraged her to search out the answers on her own, an early lesson in research skills. “Now, I just pull out my phone and find everything” she says with a smile. But even now, she says, her house is “full of books.”

As she did while growing up in a family given to outdoor activities, White enjoys hiking and backpacking, and says she’s now learning fly-fishing, “but I don't catch a lot of fish yet.” She also enjoys amateur astrophotography, a hobby she picked up in Arizona, one of the country’s premier areas for astronomy. “Astrophotography is another way to remotely probe plasmas, since most of the objects we see up there are plasmas,” she says.

Currently, she continues to push frontiers in her field, aiming to predict with high confidence the details of the turbulence in tokamaks, and to use these predictions to help winnow down the most promising possible new reactor system designs. A lot of past research in predictive models has involved “much trial and error,” she says, and finding formulas that can make truly useful predictions could be an important step on the long road toward practical, economical fusion power. White says she is excited about the ARC tokamak concept recently developed by MIT researchers, and how “theory-based predictive modeling can feed into new high magnetic field designs.”

Though her work at MIT has expanded to include more theory and simulations, “I still like tinkering,” she says. “One of my favorite things is building instruments” to enable new or better measurements, “and analyzing experimental data.” And now, working with her graduate students and postdoc, she is developing systems to carry out measurements of turbulence and other factors at four different research reactors.

Anne White: solving mysteries in the pursuit of fusion power