The future of agriculture is computerized 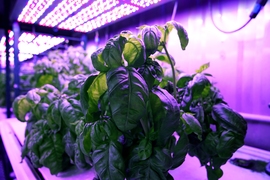 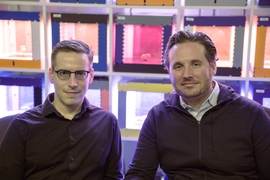 What goes into making plants taste good? For scientists in MIT’s Media Lab, it takes a combination of botany, machine-learning algorithms, and some good old-fashioned chemistry.

Using all of the above, researchers in the Media Lab’s Open Agriculture Initiative report that they have created basil plants that are likely more delicious than any you have ever tasted. No genetic modification is involved: The researchers used computer algorithms to determine the optimal growing conditions to maximize the concentration of flavorful molecules known as volatile compounds.

But that is just the beginning for the new field of “cyber agriculture,” says Caleb Harper, a principal research scientist in MIT’s Media Lab and director of the OpenAg group. His group is now working on enhancing the human disease-fighting properties of herbs, and they also hope to help growers adapt to changing climates by studying how crops grow under different conditions.

“Our goal is to design open-source technology at the intersection of data acquisition, sensing, and machine learning, and apply it to agricultural research in a way that hasn’t been done before,” Harper says. “We’re really interested in building networked tools that can take a plant’s experience, its phenotype, the set of stresses it encounters, and its genetics, and digitize that to allow us to understand the plant-environment interaction.”

In their study of basil plants, which appears in the April 3 issue of PLOS ONE, the researchers found, to their surprise, that exposing plants to light 24 hours a day generated the best flavor. Traditional agricultural techniques would never have yielded that insight, says John de la Parra, the research lead for the OpenAg group and an author of the study.

“You couldn’t have discovered this any other way. Unless you’re in Antarctica, there isn’t a 24-hour photoperiod to test in the real world,” he says. “You had to have artificial circumstances in order to discover that.”

Harper and Risto Miikkulainen, a professor of computer science at the University of Texas at Austin, are the senior authors of the paper. Arielle Johnson, a director’s fellow at the Media Lab, and Elliot Meyerson of Cognizant Technology Solutions are the lead authors, and Timothy Savas, a special projects assistant at the Open Agriculture Initiative, is also an author.

Located in a warehouse at the MIT-Bates Laboratory in Middleton, Massachusetts, the OpenAg plants are grown in shipping containers that have been retrofitted so that environmental conditions, including light, temperature, and humidity, can be carefully controlled.

This kind of agriculture has many names — controlled environmental agriculture, vertical farming, urban farming — and is still a niche market, but is growing fast, Harper says. In Japan, one such “plant factory” produces hundreds of thousands of heads of lettuce every week. However, there have also been many failed efforts, and there is very little sharing of information between companies working to develop these types of facilities.

One goal of the MIT initiative is to overcome that kind of secrecy, by making all of the OpenAg hardware, software, and data freely available.

“There is a big problem right now in the agricultural space in terms of lack of publicly available data, lack of standards in data collection, and lack of data sharing,” Harper says. “So while machine learning and artificial intelligence and advanced algorithm design have moved so fast, the collection of well-tagged, meaningful agricultural data is way behind. Our tools being open-source, hopefully they will get spread faster and create the ability to do networked science together.”

In the PLOS ONE study, the MIT team set out to demonstrate the feasibility of their approach, which involves growing plants under different sets of conditions in hydroponic containers that they call “food computers.” This setup allowed them to vary the light duration and the duration of exposure to ultraviolet light. Once the plants were full-grown, the researchers evaluated the taste of the basil by measuring the concentration of volatile compounds found in the leaves, using traditional analytical chemistry techniques such as gas chromatography and mass spectrometry. These molecules include valuable nutrients and antioxidants, so enhancing flavor can also offer health benefits.

All of the information from the plant experiments was then fed into machine-learning algorithms that the MIT and Cognizant (formerly Sentient Technologies) teams developed. The algorithms evaluated millions of possible combinations of light and UV duration, and generated sets of conditions that would maximize flavor, including the 24-hour daylight regime.

Moving beyond flavor, the researchers are now working on developing basil plants with higher levels of compounds that could help to combat diseases such as diabetes. Basil and other plants are known to contain compounds that help control blood sugar, and in previous work, de la Parra has shown that these compounds can be boosted by varying environmental conditions.

The researchers are now studying the effects of tuning other environmental variables such as temperature, humidity, and the color of light, as well as the effects of adding plant hormones or nutrients. In one study, they are exposing plants to chitosan, a polymer found in insect shells, which makes the plant produce different chemical compounds to ward off the insect attack.

They are also interested in using their approach to increase yields of medicinal plants such as the Madagascar periwinkle, which is the only source of the anticancer compounds vincristine and vinblastine.

“You can see this paper as the opening shot for many different things that can be applied, and it’s an exhibition of the power of the tools that we’ve built so far,” de la Parra says. “This was the archetype for what we can now do on a bigger scale.”

This approach offers an alternative to genetic modification of crops, a technique that not everyone is comfortable with, says Albert-László Barabási, a professor of network science at Northeastern University.

“This paper uses modern ideas in digital agriculture to systematically alter the chemical composition of the plants we eat by changing the environmental conditions in which the plants are grown. It shows that we can use machine learning and well-controlled conditions to find the sweet spots, that is, the conditions under which the plan maximizes taste and yield,” says Barabási, who was not involved in the study.

Another important application for cyber agriculture, the researchers say, is adaptation to climate change. While it usually takes years or decades to study how different conditions will affect crops, in a controlled agricultural environment, many experiments can be done in a short period of time.

“When you grow things in a field, you have to rely on the weather and other factors to cooperate, and you have to wait for the next growing season,” de la Parra says. “With systems like ours, we can vastly increase the amount of knowledge that can be gained much more quickly.”

The OpenAg team is currently performing one such study on hazelnut trees for candy manufacturer Ferrero, which consumes about 25 percent of the world’s hazelnuts.

As part of their educational mission, the researchers have also developed small “personal food computers” — boxes that can be used to grow plants under controlled conditions and send data back to the MIT team. These are now used by many high school and middle school students in the United States, among a network of diverse users spread across 65 countries, who can share their ideas and results via an online forum.

“For us, each box is a point of data which we’re very interested in getting, but it’s also a platform of experimentation for teaching environmental science, coding, chemistry, and math in a new way,” Harper says.

MIT researchers developed a machine learning system that has identified the ideal growing conditions for basil, reports Chase Purdy for Quartz. The new system, which is available to the public for free, “could lead to an interesting new era of urban farming, in which cities can more efficiently feed themselves without relying on the costly supply chain networks that currently exists.”

MIT researchers have developed a machine learning system that uncovered the ideal growing conditions for producing the most flavorful basil, reports Devin Coldewey for TechCrunch. Coldewey explains that the system recommended keeping UV lights on the plants 24/7 and found that “this produced a massive increase in flavor molecules, doubling the amount found in control plants.”