Caption:
A 3-D rendering of mouse visual cortex stretching from the surface at left to the subplate on the right. The green color represents calcium signals of neural activity and magenta represents blood vessels and myelin fibers in the white matter.
Credits:
Image courtesy of the Sur Lab

Just like doctors seek to scan deeper into the body with sonograms, CT, and MRI, and astronomers seek to look farther out into the universe with space-based telescopes, adaptive optics, and different wavelengths of light, neuroscientists pursue new ways to watch brain cells at work deep inside the brain. Three-photon microscopy recently emerged to give them a deeper look at brain cells than ever before.

Now, based on a substantial refinement of the technology, scientists at MIT have conducted the first-ever study of stimulated neural activity in an awake mouse through every visual cortex layer and notably the mysterious subplate below.

“By optimizing the optical design and other features for parameters for making measurements in the live brain, we were able to actually make novel discoveries that were not possible before,” says co-corresponding author Mriganka Sur, the Newton Professor of Neuroscience in the Picower Institute for Learning and Memory. The paper’s co-lead authors are postdocs Murat Yildirim and Hiroki Sugihara. The other corresponding author is Peter So, professor of mechanical engineering and biological engineering.

“The concept has existed, but the question was how do you make it work,” Sur says.

In the study, published in Nature Communications, the team showed that as mice watched visual stimuli, their human observers could measure patterns of activity among neurons in all six layers of visual cortex and the subplate, providing new data about their role in how mammals process vision. Moreover, through a series of careful experiments, the researchers were able to show that the light they sent in, as well as the light that came back out, neither damaged, nor even altered, the cells they measured.

In all, the paper describes a new three-photon microscope optimized to deliver rapid, short, low-power pulses of light capable of reaching deep targets without causing any functional disturbance or physical damage, and then to detect the resulting fluorescence emitted by cells with high efficiency to produce images with sharp resolution and a fast frame rate.

“We were motivated to show what we could do with three-photon microscope technology for an animal in an awake condition so we could ask important questions of neuroscience,” Yildirim says. “You could think you have the best microscope in the world, but until you ask those questions you don’t know what results you are going to get.” 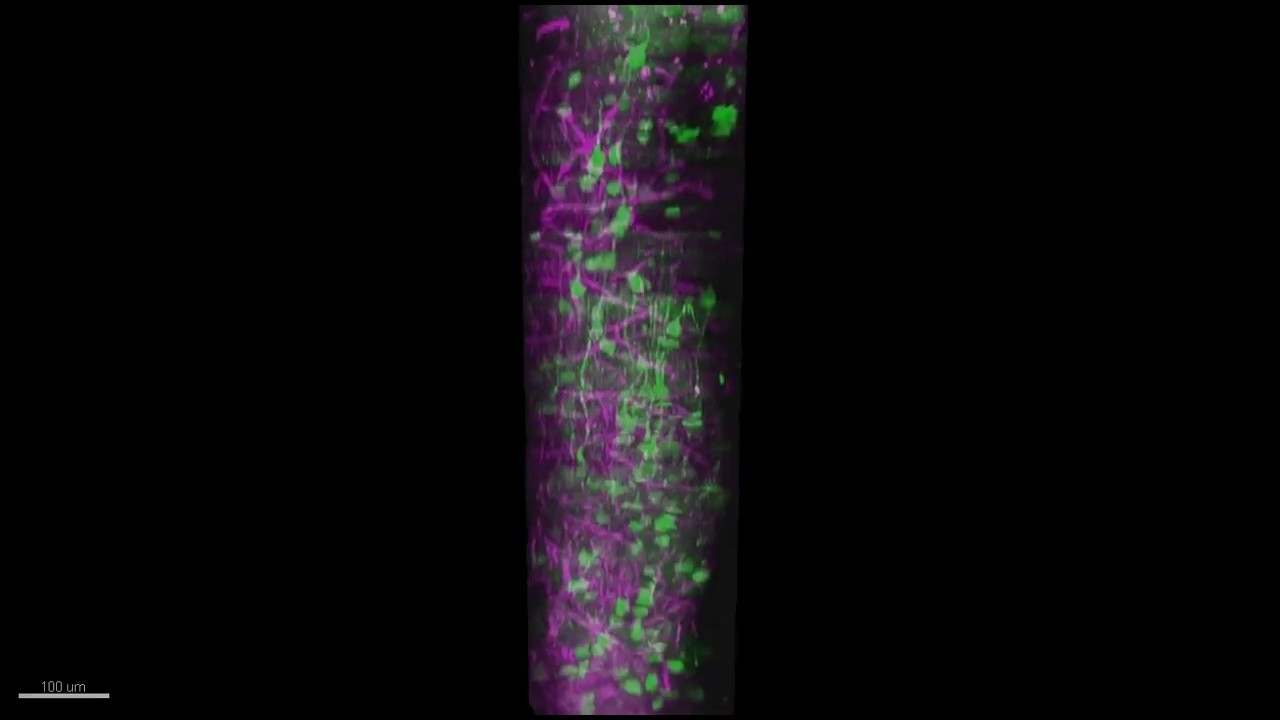 The theory behind multiphoton microscopy dates back to the 1931 doctoral dissertation of Maria Goeppert-Mayer, whose work showed that a simultaneous combination of lower-energy photons could excite an atom or molecule to a higher energy state just like a single higher energetic photon could. In 1990 Cornell University scientists applied that insight to biological imaging in the two-photon microscope and again in 2013 with a three-photon scope. These allowed neuroscientists to see deeper into the brain because lower energy, higher wavelength photons are less susceptible than higher-energy, shorter-wavelength photons to being scattered by cellular molecules like lipids.

Sur and So’s labs at MIT have joined in pushing the frontiers of multiphoton microscopy. In the new study they show they’ve now taken it far enough to study live neural activity. To do that, the team sought to refine many different parameters of both the laser light and the scope optics, based on meticulous measurements of properties of the brain tissue they were imaging.

For instance, they not only measured the energy at which cells started to show overt damage (about 10 nanojoules), but also measured the power at which cells would start to behave differently, thereby producing data influenced by the measurement (2 to 5 nanojoules). With precision and purpose to deliver lower energy levels, the scientists optimized the scope to emit incredibly short pulses of light lasting for a “pulse width” of only 40 femtoseconds, or quadrillionths of a second, and painstakingly arranged the optics to maximize the collection of the light that molecules, excited by the incoming laser energy, would emit back.

After carefully validating that the optimized three-photon scope’s measurements agreed with those of two-photon scopes (in shallower layers of the cortex) and electrophysiology (which can go deeper, but blindly), the team set out to do some unprecedented neuroscience — direct visual observation of neural activity in all cortical layers of awake, behaving animals.

In the lab they showed mice some grating patterns in 12 different rotated orientations and two directions of motion across a screen. With their optimized three-photon scope, they watched neurons in each layer of the cortex — going more than a millimeter deep — to see how the cells reacted to this standard visual input. They could see the activity of the cells because they had engineered them to glow upon elevated calcium activity, using a label called GCaMP6s. They could see other tissues like blood vessels and white matter via a phenomenon researchers call “third harmonic generation.”

With the capability to see the deepest layers they observed that layer 5 neurons are broadly tuned for orientation, meaning they respond to a wide variety of orientations, rather than just one or two specific ones. Layer 5 neurons also had more spontaneous activity than cells in other layers and more connections to deeper parts of the brain. Meanwhile, layer 6 neurons had somewhat sharper orientation tuning than neurons in other layers, meaning they are more specific in their response to distinct orientations.

The most surprising finding was that the subplate, a thin layer of mostly neural white-matter fibers, was home to a population of neurons with patterns of activity that were weakly and broadly tuned to the visual input. The finding was revelatory, the researchers said, in that many neuroscientists believed that subplate neurons were mostly only active during development. The layer is also too thin, Yildirim said, to be measured with electrophysiology.

“So far, subplate neurons in the mature brain have not been studied at all due to the technical challenges of imaging these cells in vivo,” the researchers wrote.

Sugihara recalls the first time Yildirim showed him that subplate neurons were active in the mature mice. “What are they doing there?” he recalls asking in surprise.

Now they are continuing to use their new scope to answer that question.

Dr. Francis Collins, director of the NIH, details how MIT researchers have developed a new low-energy imaging approach called three-photon microscopy that allows exploration of all six layers of the visual cortex in a mammal’s brain. Collins notes that the researchers are proving themselves to be “biological explorers of the first order.”

Biologists discover an unusual hallmark of aging in neurons