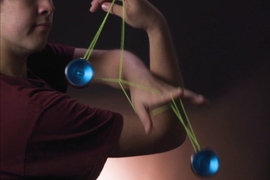 Each spring, accepted MIT students trek to Cambridge, Massachusetts, for the Institute’s annual Campus Preview Weekend. They visit labs, explore campus, and speak with faculty to help decide whether or not MIT would be a good fit. For Alex Hattori, a rising senior studying mechanical engineering, a pivotal moment came during his Campus Preview Weekend as he was browsing The Coop, MIT’s bookstore.

“I found MIT yo-yos at The Coop. No other school I had visited had yo-yos, so I was really excited,” Hattori says.

Yo-yos have played a central role in Hattori’s life. He has won first place in the dual yo-yo division of the National Yo-Yo Contest for the past six years straight. The first time he went on an airplane was to attend the World Yo-Yo Contest, an event he has participated in every year since 2010.

This passion for yo-yoing started when Hattori entered middle school in his hometown of Torrance, California. A group of his friends were yo-yoing at school one day. Hattori picked up a yo-yo and has been playing ever since.

“Within a month of starting to yo-yo, I competed in my first contest and managed to win,” he recalls. While he had a knack for yo-yoing, he owes his success to lots of practice. He also benefitted from being in the right place at the right time. “Back when I started yo-yoing, southern California was a hub for yo-yoing,” he says.

On Saturdays throughout middle school and high school, Hattori and his friends would visit the kite store at a local pier for free yo-yo lessons. As he honed his skills, he gravitated toward the 3A yo-yo style — a challenging type of yo-yoing that involves two long spinning yo-yos. “I like having a second yo-yo because it effectively gives me an n-squared amount of tricks I can do,” Hattori explains.

When it was time for him to choose a college, the yo-yo at The Coop wasn’t the only thing that tipped the scales in MIT’s favor. Two classes in particular offered in the Department of Mechanical Engineering would allow Hattori to pursue his two biggest passions: robotics and yo-yoing.

Hattori took 2.008 in fall 2017, right around the same time he was working on a new design to use at the 2018 World Yo-Yo Contest this summer. Hattori and his team made an aluminum mold of his design and injected hot plastic, which cooled into the shape of the mold — a process many yo-yo companies use to produce plastic yo-yos. He used the same design he developed in 2.008 when competing at the 2018 World Yo-Yo Contest in Shanghai last month, where he took second place in the 3A division.

While studying mechanical engineering has afforded Hattori the opportunity to explore his passions inside the classroom, the various makerspaces on MIT’s campus have allowed him to build robots and yo-yos on his own time.

“A lot of students come to MIT because they want to build things, but they’re usually pretty shy about it at first. Alex wasn’t shy,” says Hattori’s freshman advisor Marty Culpepper, professor of mechanical engineering and MIT’s Maker Czar.

Culpepper helped Hattori find the makerspaces and workshops where he could build robots and make yo-yos. “It’s one thing if you’re forced to build in class, but having spaces where students can hang out with their friends and build something helps them make connections and put the things they’ve learned into practice,” Culpepper adds.

Long before Hattori enrolled in class 2.008, he was able to make yo-yos in these makerspaces. “As soon as I got to MIT as a freshman I started making yo-yos in my free time,” Hattori says.

As he enters his final year of undergraduate study at MIT, Hattori has a full plate. This spring he participated in the Discovery Channel’s BattleBots as part of Team SawBlaze. Last month, he finished in the top 16 at the Fighting My Bots World Cup, which took place in Shanghai the same week as the World Yo-Yo Contest. He is president of both the MIT Combat Robotics Club and the MIT Electronic Research Society (MITERS) — a student-run makerspace. This fall, he will also begin the process of applying to graduate school, where he hopes to study robotics.

Wherever the future brings him, Hattori plans to have his yo-yo in tow. “I don’t ever plan on stopping yo-yoing,” he says. “It’s so easy to bring it around with me anywhere I go.”

Boston Globe reporter Dugan Arnett spotlights MechE senior Alex Hattori, a six-time national yo-yo champion. Hattori, who was originally inspired to attend MIT so that he could take a course where students design and build yo-yos, explains that he doesn’t think he’ll ever stop competing. “I love yo-yoing as much as I did the first day,” he says.

Meet the women shaping science and engineering in Saudi Arabia

Teaching robots how to move objects

On a mission to build the uncrashable car