Meet the women shaping science and engineering in Saudi Arabia 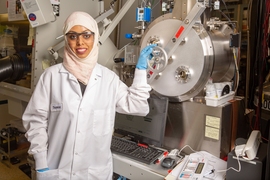 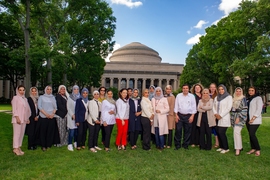 Since 2012, a handful of Saudi Arabia’s top scientists and engineers have arrived on MIT’s campus every year for a once-in-a-lifetime experience. Through the Ibn Khaldun Fellowship for Saudi Arabian Women, these Saudi female scientists and engineers with PhDs are invited to spend one year conducting research at MIT. Each fellow is paired with an MIT faculty for a research project and exposed to a number of professional development opportunities.

While the program was launched in MIT’s Department of Mechanical Engineering, the 27 fellows have been placed in 14 different departments, labs, and centers across the Institute including the Computer Science and Artificial Intelligence Laboratory, MIT Sloan School of Management, and the MIT Media Lab. Recently, 24 of these fellows convened on campus for the program’s first ever reunion.

“For me, this week has felt like a family reunion,” remarks Kate Anderson, former program manager for the fellowship. Anderson, along with program director and professor of mechanical engineering Kamal Youcef-Toumi and recently appointed program manager Theresa Werth, has worked with each fellow on identifying the appropriate research project and helping them navigate their new surroundings at MIT.

At the reunion, the five current fellows who are wrapping up their assignments at MIT provided an overview of their research projects. Topics ranged from carbon nanomaterials to solar cells and personalized drug screening. Alumni of the program then provided updates both on their research projects and how their careers have progressed since returning to Saudi Arabia.

“It was very inspiring to hear about how so many fellows have built successful careers by taking bold steps that required a lot of courage,” recalls Areej Al-Wabil, 2015 fellow and current principal investigator at the Center for Complex Engineering at King Abdulaziz City for Science and Technology (KACST) and MIT.

In addition to serving as leaders in their respective research fields, many former fellows, such as Al-Wabil, have gone on to serve as deans, vice deans, directors of research centers, and principal investigators.

“You are the change and you are the leaders,” said Youcef-Toumi in his remarks at the reunion. “Each one of you — your contributions are very significant. You are influencing people and inspiring them to become motivated just by interacting with you.”

Finding sense of community inside and outside of the lab

Since the program launched, the 27 fellows have authored 34 journal publications and 27 conference papers, and submitted four patents all directly related to the research they conducted at MIT.

For current fellow Thamraa Al-Shahrani, her project afforded her the opportunity to research a topic that could have a major impact on her home country. She worked with Tonio Buonassisi, associate professor of mechanical engineering and director of the MIT Photovoltaics Research Laboratory, on developing solar cells that can function in hot or arid climates — like that of Saudi Arabia.

“Working on something that has direct applications to my country has been amazing,” says Al-Shahrani. She and her team exposed solar cells to varying temperatures and studied their behavior in the hopes of determining how to improve temperature stability. Al-Shahrani served as first author on the resulting research paper, which was presented at the Materials Research Society meeting in April.

Helping lead a team of scientists from MIT and Saudi Aramco did more than give Al-Shahrani critical research experience — she learned about the teamwork necessary for international research collaborations. “Tonio and his team were so supportive and encouraging,” she says. “If there was a problem with the study, we would all discuss it together to come up with a solution. The experience really gave me a sense of what it’s like to work on a team.”

This sense of community extended beyond the lab to her fellow Ibn Khaldun classmates. “The program connects fellows to each other — we got to celebrate Eid al-Fitr and Eid al-Adha together along with Kate and Theresa,” she recalls.

The network the fellows create continues after the experience at MIT concludes. “An important part of the fellowship for me was building a network of professional in a similar phase of our careers,” adds Al-Wabil. This network has resulted in career opportunities for the fellows back in Saudi Arabia.

For Al-Wabil, her work researching the design planning and ideation process in engineering projects, with Maria Yang, associate professor of mechanical engineering and director of MIT’s Ideation Laboratory, was just the start. “The experience was so rich,” says Al-Wabil. “I learned on so many fronts about scientific research, educational best practices, and professional development skills.”

Al-Wabil served as a mentor for class 2.00b (Toy Design). In lab sessions, she and her fellow mentors brought their discipline-specific expertise to the design process to help guide students from the ideation phase to a working prototype. “In teaching we rarely touch on all phases, so that was an immersive learning experience for me as a teaching faculty,” she adds.

While at MIT, Al-Wabil also immersed herself in hacker culture. After participating in the annual Assistive Technologies Hackathon, she was inspired to bring the hackathon platform back to her institution in Saudi Arabia. “I was able to take that experience and introduce the same concept in Saudi at a smaller scale,” says Al-Wabil. In October, her institution will host a “Hacking Medicine” hackathon using the MIT hacking model.

As Saudi Arabia works toward Saudi Vision 2030, which hopes to increase women’s participation in the workforce from 22 percent to 30 percent by the year 2030, programs like the Ibn Khaldun Fellowship take on a greater purpose.

“These women are not only contributing to the science and technology development of the Kingdom, they are changing the country as we speak,” says Anderson.

Al-Shahrani sees the value of the program at this particular time in Saudi Arabia’s history. “The fellowship has helped a new generation of Saudi women build their leadership skills,” she notes. “This is especially important now as Saudi Arabia is making big changes and supporting women in the workforce.”

In March, the program announced an agreement with new sponsor KACST to extend the fellowship for the next decade. In January 2019, five new fellows will join a community of women who are shaping the future of science and engineering in their country.