Inspired by nature, reaching across disciplines 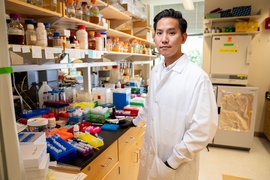 Caption:
“If you have a problem, and you look into the problem in nature and see how animals or plants deal with these kinds of problems and extract those design principles, you can try to replicate [them] using engineering approaches,” saysZijay Tang, a PhD candidate in MIT’s Department of Biological Engineering.
Credits:
Images: Bryce Vickmark

Years ago, Tzu-Chieh “Zijay” Tang and his peers in his high school biology club would gather after school to go on a nature hike into the mountains of Taipei, Taiwan. Together, they’d trek eight or nine miles, often reaching the summit of choice past midnight. For Tang, that’s when the mountains truly became alive.

“That’s the prime time for frogs, snakes, stag beetles, and other insects,” Tang says. “That’s when they’re most active.” A budding biologist, Tang collected specimens from his hikes and expeditions into local forests and was inspired by the diversity of the different fauna he saw in natural environments.

As he delved deeper into nature, Tang developed an interest in molecular biology, and pursued life science research at Academia Sinica, the national academy of Taiwan. There, he gained a hands-on approach to performing research, and opted to continue his studies in life science during his undergraduate studies at National Taiwan University.

Before arriving at MIT, Tang also studied design and architecture, and materials science, which ultimately stoked his passion for biology and the structures of living things. Now a fifth-year graduate student in the Department of Biological Engineering, Tang is working on engineering living materials that can sense aspects of their environment and relay what they’ve sensed back to researchers.

After graduating, Tang joined the Taiwanese air force and worked at Hualien Airport. The mandatory military service temporarily paused his science studies; afterward, he resumed his research at Academia Sinica. In the evenings, instead of venturing into the forests, Tang explored design and architecture as he finished his undergraduate studies.

He soon learned of efforts to build sustainable cities in the United Arab Emirates, and moved to Masdar City, Abu Dhabi, to pursue a master’s in materials science and engineering at the Masdar Institute of Science and Technology (now Khalifa University of Science and Technology). In Masdar City, he focused on atomic force microscopy, a technique which helps researchers study the physics of objects’ surfaces. While his peers focused on pure materials like graphite, Tang drew from his background in biology and examined DNA molecules, dragonfly wings, shrimp shells, and fish scales (“I was curious about what they’d look like,” Tang says.)

The fish scales helped Tang discover a new interest: biological engineering. After examining a Gulf parrotfish he found at a local market in Abu Dhabi, Tang and his colleagues decided to focus on the scales’ nanoscale water-repellent properties. The scales represented a “safe, energy-efficient” solution in biology that could potentially be applied to the problem of marine biofouling — when organisms such as barnacles and algae grow on pipes — in variable environmental conditions.

“If you have a problem, and you look into the problem in nature and see how animals or plants deal with these kinds of problems and extract those design principles, you can try to replicate [them] using engineering approaches,” Tang says. He cites the work of Neri Oxman, associate professor of media arts and sciences at the MIT Media Lab and Tang’s co-advisor, as an example of nature-inspired materials research.

Even after the project on the fish scales, Tang wasn’t quite ready to dive into the field of biological engineering. “This is a relatively new field. Sometimes there are too many options and a lot of possibilities, and you have to know more before you make decisions,” Tang says.

While researchers have engineered microbes like E. coli to sense, record, and relay information from their environments, Tang focuses on “creating an environment where you can protect those microbes, and, at the same time, don’t let them escape into the environment.” For Tang, this involves encapsulating approximately 1 billion E. coli in a hydrogel material — inspired by the popping boba in bubble tea — specifically engineered to do just that.

But wouldn’t it be efficient if the sensing bacteria could learn to support themselves, too? To study how microbes could produce self-supporting matrices, Tang looks to SCOBY, the floating biofilm added to teas to create the popular fermented tea drink kombucha. SCOBY stands for symbiotic community of bacteria and yeast, and contains a cellulose-rich architecture that could serve as a model for the creation of self-supporting matrices with sensing microbes.

To study and engineer sensing SCOBYs, Tang collaborates with colleagues in the Department of Bioengineering at Imperial College London through the MIT International Science and Technology Initiatives (MISTI). Through the collaboration, Tang hopes to create a living material inspired by kombucha that can not only sense contaminants in water, but also serve as a filter.

Tang envisions the impacts of potential living-filters as far-reaching. “You can actually dry [the kombucha-inspired filter],” he says. “Even in remote areas, people can grow it themselves. You don’t have to do anything. Just put it in a fresh culture and it will grow.”

During his time at MIT, Tang has also served as a teaching assistant for 6.129/20.129 (Biological Circuit Engineering Lab), a synthetic biology lab course that teaches students the fundamentals of research techniques in synthetic biology.

Compared to building traditional electrical circuits, “building biological systems is actually more complicated and time consuming,” Tang says. As a part of the course, students propose their own biological circuits, and build them using the techniques gained in the lab.

“I really appreciate that [the department] has the vision to let the students do this,” Tang says, citing the intense time commitment of lab work as well as the rapidly developing nature of the field. “They really know how to be the pioneers.”