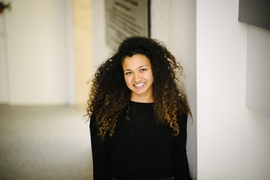 ↓ Download Image
Caption: “The thing that drew me to [biological engineering] in the first place was being able to help people,” Joseph says, “and [MIT] was the only school where I felt that goal was actually true of the curriculum.”
Credits: Image: Ian Maclellan 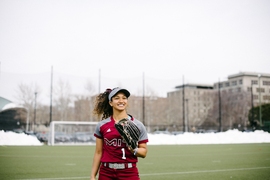 ↓ Download Image
Caption: When she’s not in the classroom or in a lab across the world, Joseph can be found with her softball team. Joseph has played varsity softball since her first year at MIT, and considers the team her family.
Credits: Image: Ian Maclellan

Caption:
When she’s not in the classroom or in a lab across the world, Joseph can be found with her softball team. Joseph has played varsity softball since her first year at MIT, and considers the team her family.
Credits:
Image: Ian Maclellan

During her sophomore year, biological engineering major Jasmin Joseph needed her wisdom teeth removed. Her softball coach drove Joseph to and from her appointment and left her with one instruction: Don’t come to practice today.

But Joseph, a Woodland Hills, California, native who had played softball since the age of 13, was determined not to miss practice. She showed up anyway, and though not allowed to play, happily watched her teammates from the bench. Her dedication was no surprise to those who know her: Joseph, now a senior, has brought that same determination to all her activities, both academic and service-based.

During high school, Joseph developed a deep fascination with biology — specifically how it could be used to develop life-saving treatments for rare diseases. During an AP biology class, she watched “Lorenzo’s Oil,” a 1992 retelling of the real-life story of a family’s quest to develop a treatment for their son’s adrenoleukodystrophy, which causes damage to the nervous system.

“I just remember thinking that it was super cool that they could actually correct for a disease,” Joseph says. She realized she wanted to help develop those types of treatments, but she wasn’t sure what she’d have to study to accomplish that. Then she spoke with a teacher who had a background in genetic engineering. After learning more about synthetic biology, Joseph had found her match: biological engineering. With that goal in mind, Joseph began to look at different schools.

“The thing that drew me to [biological engineering] in the first place was being able to help people,” Joseph says, “and [MIT] was the only school where I felt that goal was actually true of the curriculum.”

During her time at MIT, Joseph has taken part in research and volunteer opportunities around the world. After her first year, Joseph worked as an undergraduate researcher at the National University of Singapore and performed vaccine delivery research through the Singapore-MIT Undergraduate Research Fellowship. Her research focused on delivering vaccines for mosquito-borne viruses.

“I would see advertisements and posters on the train for dengue studies looking for participants, and warnings not to leave standing water nearby because it attracts mosquitoes that could carry the virus,” Joseph recalls. “It was a real reminder of the need this sort of research fills and how imperative it is to work toward bettering global access to vaccines and treatments for infectious diseases.”

The following summer, Joseph traveled to Ghana to work as a development volunteer at MoringaConnect, a startup founded by Kwami Williams ’12. The startup centers around finding efficient and sustainable ways to process the moringa plant, which has nutritional and medicinal properties, so that community members may begin to grow it, process it, and sell it themselves. Joseph helped improve methods to process the moringa leaf. While doing her research, she found time to share her vibrant personality with other volunteers and community members. “Every Monday, someone had to teach a lesson, and I taught how to juggle,” Joseph recalls with a laugh.

The summer before her senior year, Joseph worked as an undergraduate researcher at the University of Cape Town, through the MIT International Science and Technology Initiatives (MISTI) MIT-South Africa program, and worked on cancer drug development. “I hopped onto different projects while I was there and learned a lot,” Joseph says.

While at MIT, Joseph has also developed her knowledge of public health. During the Independent Activities Period (IAP) of here sophomore year, Joseph taught health and biology to high school students in Puebla, Mexico, through MISTI’s Global Teaching Labs.

During IAP of her senior year, Joseph took HST.434 (“Evolution of an Epidemic). The class took place in Durban, South Africa, and focused on the evolution of the AIDS epidemic.

There, Joseph learned about the FRESH study, a long-term study that identifies women acutely infected by HIV. The study, run by the Ragon Institute of Harvard, MGH, and MIT, also provides those women with career training and aims to empower them through education. Joseph was deeply inspired by the women participating in the study project.

“Even though they’re living in a place where HIV is prevalent and they have to face so many hardships in their lives, they are still so vibrant and lively, and I really felt that they had found a sisterhood,” Joseph says, “I thought it was really cool to see them leaning on each other. It really helped me to see that I love the idea of having an impact on global health.”

During her sophomore year, Joseph joined Camp Kesem, a summer camp for children whose parents have been affected by cancer. As part of training, Joseph learned camp songs and games which she could play with the campers.

“You go to camp for a week, and you’re just there to make the kids smile and be their friend. That’s all it is and all it should be, and it’s great,” Joseph says.

After her first week volunteering at Camp Kesem, Joseph applied for the coordinator board to play a bigger role in planning camp activities. “I got on the coordinator board and I just threw myself into it completely, I loved it so much, and I still do,” Joseph says. She focused especially on teen activities. “In addition to the normal camp things, we also do leadership development and get into deeper, more emotional conversations with [teens],” Joseph says. “You get to be there for them.”

This year, Joseph is the volunteer coordinator for Camp Kesem and helps find the next groups of counselors for the coming summers.

When she’s not in the classroom or in a lab across the world, Joseph can be found with her softball team. Joseph has played varsity softball since her first year at MIT, and considers the team her family.

“It’s like we’re getting through everything together and it feels seamless,” she says.

Joseph says the team spends a lot of time together in the locker room, building friendships and supporting one another. “I think it is really a testament to how much our coaches put into fostering the sort of community where everyone can be themselves and really embrace who they are as softball players and friends and people,” Joseph says.

After graduation, Joseph intends to get her PhD in biological engineering; she also plans to be a writer.

“Long term, it’s about being able to take what I learned and share it and make sure that people have access to the information that they need to be able to make the decisions that are the best for them and the people they care about,” Joseph says. “I like the idea of writing and communicating the things that are important to the world.”