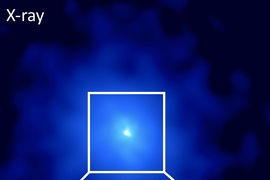 ↓ Download Image
Caption: An X-ray image (in blue) with a zoom in optical image (gold and brown) showing the central galaxy of a hidden cluster, which harbors a supermassive black hole.
Credits: Image: Taweewat Somboonpanyakul

Caption:
An X-ray image (in blue) with a zoom in optical image (gold and brown) showing the central galaxy of a hidden cluster, which harbors a supermassive black hole.
Credits:
Image: Taweewat Somboonpanyakul

MIT scientists have uncovered a sprawling new galaxy cluster hiding in plain sight. The cluster, which sits a mere 2.4 billion light years from Earth, is made up of hundreds of individual galaxies and surrounds an extremely active supermassive black hole, or quasar.

The central quasar goes by the name PKS1353-341 and is intensely bright — so bright that for decades astronomers observing it in the night sky have assumed that the quasar was quite alone in its corner of the universe, shining out as a solitary light source from the center of a single galaxy.

But as the MIT team reports today in the Astrophysical Journal, the quasar’s light is so bright that it has obscured hundreds of galaxies clustered around it.

In their new analysis, the researchers estimate that there are hundreds of individual galaxies in the cluster, which, all told, is about as massive as 690 trillion suns. Our Milky Way galaxy, for comparison, weighs in at around 400 billion solar masses.

The team also calculates that the quasar at the center of the cluster is 46 billion times brighter than the sun. Its extreme luminosity is likely the result of a temporary feeding frenzy: As an immense disk of material swirls around the quasar, big chunks of matter from the disk are falling in and feeding it, causing the black hole to radiate huge amounts of energy out as light.

“This might be a short-lived phase that clusters go through, where the central black hole has a quick meal, gets bright, and then fades away again,” says study author Michael McDonald, assistant professor of physics in MIT’s Kavli Institute for Astrophysics and Space Research. “This could be a blip that we just happened to see. In a million years, this might look like a diffuse fuzzball.”

McDonald and his colleagues believe the discovery of this hidden cluster shows there may be other similar galaxy clusters hiding behind extremely bright objects that astronomers have miscatalogued as single light sources. The researchers are now looking for more hidden galaxy clusters, which could be important clues to estimating how much matter there is in the universe and how fast the universe is expanding.

In 2012, McDonald and others discovered the Phoenix cluster, one of the most massive and luminous galaxy clusters in the universe. The mystery to McDonald was why this cluster, which was so intensely bright and in a region of the sky that is easily observable, hadn’t been found before.

“We started asking ourselves why we had not found it earlier, because it’s very extreme in its properties and very bright,” McDonald says. “It’s because we had preconceived notions of what a cluster should look like. And this didn’t conform to that, so we missed it.”

For the most part, he says astronomers have assumed that galaxy clusters look “fluffy,” giving off a very diffuse signal in the X-ray band, unlike brighter, point-like sources, which have been interpreted as extremely active quasars or black holes.

“The images are either all points, or fluffs, and the fluffs are these giant million-light-year balls of hot gas that we call clusters, and the points are black holes that are accreting gas and glowing as this gas spirals in,” McDonald says. “This idea that you could have a rapidly accreting black hole at the center of a cluster — we didn’t think that was something that happened in nature.”

But the Phoenix discovery proved that galaxy clusters could indeed host immensely active black holes, prompting McDonald to wonder: Could there be other nearby galaxy clusters that were simply misidentified?

To answer that question, the researchers set up a survey named CHiPS, for Clusters Hiding in Plain Sight, which is designed to reevaluate X-ray images taken in the past.

“We start from archival data of point sources, or objects that were super bright in the sky,” Somboonpanyakul explains. “We are looking for point sources inside fluffy things.”

For every point source that was previously identified, the researchers noted their coordinates and then studied them more directly using the Magellan Telescope, a powerful optical telescope that sits in the mountains of Chile. If they observed a higher-than-expected number of galaxies surrounding the point source (a sign that the gas may stem from a cluster of galaxies), the researchers looked at the source again, using NASA’s space-based Chandra X-Ray Observatory, to identify an extended, diffuse source around the main point source.

“Some 90 percent of these sources turned out to not be clusters,” McDonald says. “But the fun thing is, the small number of things we are finding are sort of rule-breakers.”

The new paper reports the first results of the CHiPS survey, which has so far confirmed one new galaxy cluster hosting an extremely active central black hole.

“The brightness of the black hole might be related to how much it’s eating,” McDonald says. “This is thousands of times brighter than a typical black hole at the center of a cluster, so it’s very extreme in its feeding. We have no idea how long this has been going on or will continue to go on. Finding more of these things will help us understand, is this an important process, or just a weird thing that there’s only one of in the universe.”

The team plans to comb through more X-ray data in search of galaxy clusters that might have been missed the first time around.

“If the CHiPS survey can find enough of these, we will be able to pinpoint the specific rate of accretion onto the black hole where it switches from generating primarily radiation to generating mechanical energy, the two primary forms of

energy output from black holes,” says Brian McNamara, professor of physics and astronomy at the University of Waterloo, who was not involved in the research. “This particular object is interesting because it bucks the trend. Either the central supermassive black hole’s mass is much lower than expected, or the structure of the accretion flow is abnormal. The oddballs are the ones that teach us the most.”

In addition to shedding light on a black hole’s feeding, or accretion behavior, the detection of more galaxy clusters may help to estimate how fast the universe is expanding.

This research was supported, in part, by the Kavli Research Investment Fund at MIT, and by NASA.

MIT researchers have discovered hundreds of galaxies that were hidden by light being emitted from a supermassive black hole, reports Kasandra Brabaw for Space.com. “The black hole, a type known as a quasar, sits 2.4 billion light-years from Earth and is so bright that astronomers have assumed it was alone in its area of space for decades,” Brabaw explains.

FOX News reporter James Rogers writes that MIT researchers have detected a new galaxy cluster that had been obscured by the bright light emitted from a supermassive black hole.  “Located just 2.4 billion light-years from Earth, the cluster consists of hundreds of individual galaxies,” Rogers explains.

The rocky world, with its baking-hot surface, is likely not habitable.