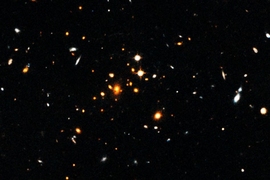 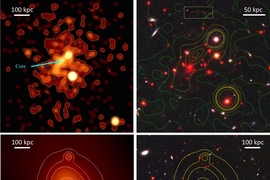 ↓ Download Image
Caption: To get a more precise estimate of the galaxy cluster’s mass, Michael McDonald and his colleagues used data from several of NASA’s Great Observatories: the Hubble Space Telescope, the Keck Observatory, and the Chandra X-ray Observatory.
Credits: Courtesy of the researchers

Caption:
To get a more precise estimate of the galaxy cluster’s mass, Michael McDonald and his colleagues used data from several of NASA’s Great Observatories: the Hubble Space Telescope, the Keck Observatory, and the Chandra X-ray Observatory.

The early universe was a chaotic mess of gas and matter that only began to coalesce into distinct galaxies hundreds of millions of years after the Big Bang. It would take several billion more years for such galaxies to assemble into massive galaxy clusters — or so scientists had thought.

Now astronomers at MIT, the University of Missouri, the University of Florida, and elsewhere, have detected a massive, sprawling, churning galaxy cluster that formed only 3.8 billion years after the Big Bang. Located 10 billion light years from Earth and potentially comprising thousands of individual galaxies, the megastructure is about 250 trillion times more massive than the sun, or 1,000 times more massive than the Milky Way galaxy.

IDCS 1426 appears to be undergoing a substantial amount of upheaval: The researchers observed a bright knot of X-rays, slightly off-center in the cluster, indicating that the cluster’s core may have shifted some hundred thousand light years from its center. The scientists surmise that the core may have been dislodged from a violent collision with another massive galaxy cluster, causing the gas within the cluster to slosh around, like wine in a glass that has been suddenly moved.

Michael McDonald, assistant professor of physics and a member of MIT’s Kavli Center for Astrophysics and Space Research, says such a collision may explain how IDCS 1426 formed so quickly in the early universe, at a time when individual galaxies were only beginning to take shape.

“In the grand scheme of things, galaxies probably didn’t start forming until the universe was relatively cool, and yet this thing has popped up very shortly after that,” McDonald says. “Our guess is that another similarly massive cluster came in and sort of wrecked the place up a bit. That would explain why this is so massive and growing so quickly. It’s the first one to the gate, basically.”

McDonald and his colleagues presented their results this week at the 227th American Astronomical Society meeting in Kissimmee, Florida. Their findings will also be published in The Astrophysical Journal.

Galaxy clusters are conglomerations of hundreds to thousands of galaxies bound together by gravity. They are the most massive structures in the universe, and those located relatively nearby, such as the Virgo cluster, are extremely bright and easy to spot in the sky.

“They are sort of like cities in space, where all these galaxies live very closely together,” McDonald says. “In the nearby universe, if you look at one galaxy cluster, you’ve basically seen them all — they all look pretty uniform. The further back you look, the more different they start to appear.”

However, finding galaxy clusters that are farther away in space — and further back in time — is a difficult and uncertain exercise.

In 2012, scientists using NASA’s Spitzer Space Telescope first detected signs of IDCS 1426 and made some initial estimates of its mass.

“We had some sense of how massive and distant it was, but we weren’t fully convinced,” McDonald says. “These new results are the nail in the coffin that proves that it is what we initially thought.”

“Tip of the iceberg”

To get a more precise estimate of the galaxy cluster’s mass, McDonald and his colleagues used data from several of NASA’s Great Observatories: the Hubble Space Telescope, the Keck Observatory, and the Chandra X-ray Observatory.

Both the Hubble and Keck Observatories recorded optical data from the cluster, which the researchers analyzed to determine the amount of light that was bending around the cluster as a result of gravity — a phenomenon known as gravitational lensing. The more massive the cluster, the more gravitational force it exerts, and the more light it bends.

They also examined X-ray data from the Chandra Observatory to get a sense of the temperature of the cluster. High-temperature objects give off X-rays, and the hotter a galaxy cluster, the more the gas within that cluster has been compressed, making the cluster more massive.

Using all three methods, the group calculated roughly the same mass — about 250 trillion times the mass of the sun. Now, the team is looking for individual galaxies within the cluster to get a sense for how such megastructures can form in the early universe.

“This cluster is sort of like a construction site — it’s messy, loud, and dirty, and there’s a lot that’s incomplete,” McDonald says. “By seeing that incompleteness, we can get a sense for how [clusters] grow. So far, we’ve confirmed about a dozen or so galaxies, but we’re just seeing the tip of the iceberg, really.”

He hopes that scientists may get an even better view of IDCS 1426 in 2018, with the launch of the James Webb Space Telescope — an infrared telescope that is hundreds of times more sensitive than the Spitzer Telescope that first detected the cluster.

“People had kind of put away this idea of finding clusters in the optical and infrared, in favor of X-ray and radio signatures,” McDonald says. “We’re now re-emerging and saying it’s actually a fantastic way of finding clusters. It suggests that maybe we need to branch out a little more in how we find these things.”

Chris Sweeney writes for Boston Magazine that MIT researchers were part of a team of astronomers that identified the largest galaxy cluster from the early universe. Sweeney writes that researchers “will continue scouring the data in search of additional galaxies while looking for clues to how the universe formed.”

The Wall Street Journal’s Monika Auger reports that a team of astronomers, including researchers from MIT, have discovered the largest galaxy cluster formed in the early universe. “Astronomers believe that this galaxy cluster probably began forming only a few hundred-million years after the Big Bang,” explains Auger.

MIT researchers have detected the largest galaxy cluster that amassed in the early universe, writes Laura Crimaldi for The Boston Globe. “It’s the most massive cluster to assemble in the first 4 billion years of the universe,” explains Prof. Michael McDonald. “It’s sort of like the first civilization to pop up.”

Five professors join the School of Science this fall