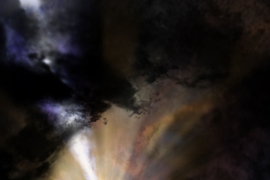 ↓ Download Image
Caption: This illustration depicts the view from outside of a rapidly-accreting black hole. The bright light toward the center represents the super-heating of gas as it falls onto the black hole. Emanating from the center is a jet of accelerated particles moving near the speed of light. Surrounding the black hold is cool, clumpy gas and dust, which are falling inwards and will eventually join the material accreting onto the black hole.
Credits: Image: NRAO/AUI/NSF and Dana Berry/SkyWorks

Caption:
This illustration depicts the view from outside of a rapidly-accreting black hole. The bright light toward the center represents the super-heating of gas as it falls onto the black hole. Emanating from the center is a jet of accelerated particles moving near the speed of light. Surrounding the black hold is cool, clumpy gas and dust, which are falling inwards and will eventually join the material accreting onto the black hole.
Credits:
Image: NRAO/AUI/NSF and Dana Berry/SkyWorks

At the center of a galaxy cluster, 1 billion light years from Earth, a voracious, supermassive black hole is preparing for a chilly feast.

For the first time, astronomers have detected billowy clouds of cold, clumpy gas streaming toward a black hole, at the center of a massive galaxy cluster. The clouds are traveling at speeds of up to 355 kilometers per second — that’s almost 800,000 miles per hour — and may be only 150 light years away from its edge, almost certain to fall into the black hole, feeding its bottomless well. The observations, published today in the journal Nature, represent the first direct evidence to support the hypothesis that black holes feed on clouds of cold gas.

The results also suggest that fueling a black hole — a process known as accretion — is a whole lot messier than scientists had once thought.

“The simple model of black hole accretion consists of a black hole surrounded by a sphere of hot gas, and that gas accretes smoothly onto the black hole, and everything’s simple, mathematically,” says Michael McDonald, assistant professor of physics in MIT’s Kavli Institute for Astrophysics and Space Research. “But this is the most compelling evidence that this process is not smooth, simple, and clean, but actually quite chaotic and clumpy.”

Given the new observations, McDonald says black holes probably have two ways of feeding: For most of the time, they may slowly graze on a steady diet of diffuse hot gas. Once in a while, they may quickly gobble up clumps of cold gas as it comes nearby.

“This diffuse, hot gas is available to the black hole at a low level all the time, and you can have a steady trickle of it going in,” McDonald says. “Every now and then, you can have a rainstorm with all these droplets of cold gas, and for a short amount of time, the black hole’s eating very quickly. So the idea that there are these two dinner modes for black holes is a pretty nice result.”

McDonald is a co-author on the paper, which was led by Grant Tremblay, an astronomer at Yale University.

The researchers made their detection using the Atacama Large Millimeter/submillimeter Array, or ALMA — one of the most powerful telescopes in the world, designed to see the oldest, most distant galaxies in the universe. The team focused ALMA’s telescopes 1 billion light years away, on the central galaxy in the Abell 2597 Cluster, a galaxy that is some tens of thousands of light years across. This particular galaxy is among the brightest in the universe, as it is likely producing many new stars.

The team originally wanted to get a sense for how many stars this cluster was churning out, so they mapped all the cold gas within the cluster. This cold gas has cooled and condensed out of the diffuse halo of hot gas surrounding a cluster, forming clumps. It is the collapse of cold gas that creates new stars, especially in the cluster’s central galaxy.

“In the center of a cluster, there’s a single massive galaxy, the big daddy galaxy of the cluster,” McDonald says. “It’s sitting at the bottom of a gravitational funnel, and all the gas from a thousand galaxies is available to it. These are the galaxies that are the most massive, with the most massive black holes in the universe, and the most potential for star formation.”

The researchers used ALMA to map the spectral signatures, or radio emissions, from the galaxy cluster, looking specifically for signatures of carbon monoxide, the presence of which usually indicates very cold gas, of minus 200 degrees Fahrenheit and below. They mapped carbon monoxide across the entire galaxy cluster and found that as they looked further into the cluster, they encountered progressively cooler gas, from millions of degrees Fahrenheit to subzero temperatures.

At the very center, just at the edge of the cluster’s supermassive black hole, the researchers discovered something quite unexpected: the shadows of three very cold, very clumpy gas clouds. The shadows were cast against bright jets of material spewing from the black hole, suggesting that these clouds were very close to being consumed by the black hole.

“We got very lucky,” McDonald says. “We could probably look at 100 galaxies like this and not see what we saw just by chance. Seeing three shadows at once is like discovering not just one exoplanet, but three in the first try. Nature was very kind in this case.”

Richard Mushotzky, professor of astronomy at the University of Maryland, says the results prove that seeing is better than simply believing.

“In astronomy and astrophysics, there are a lot of good ideas out there likely to be true, but it’s important to prove they’re actually true,” says Mushotzky, who did not contribute to the paper. “That’s the big deal here. We believe [cold gas fuels black holes], it fits the models, but it’s much different to actually know than to believe.”

The team estimated the velocities of the three clouds to be 240, 275, and 355 kilometers per second, with all three headed toward the black hole. McDonald says these three cold gas clouds will likely not stream straight into the black hole but instead be absorbed into its accretion disc — the massive disc of material that will eventually spiral into the black hole.

He adds that while ALMA was only able to see three clouds of cold gas near the black hole, there may be even more in the vicinity, setting the black hole up for quite a feast.

“We’re only seeing this tiny sliver,” McDonald says. “If there are three clouds in just our line of sight, there might be millions of clouds all around. And there’s a tremendous amount of energy in just these three clouds. So if we were to look at this thing a million years later, we might see that the black hole is in outburst — much brighter, with more powerful jets, because all this high-energy material is landing on it.”

“ALMA has only been working for three years, turning on slowly,” Mushotzky adds. “It’s a very big and complex instrument, and this is very early data, but already things are turning out to be very exciting.

This research was funded, in part, by NASA, the European Research Council, the Natural Sciences and Engineering Research Council of Canada, and the Science and Technology Facilities Council.

Washington Post reporter Rachel Feltman writes that astronomers have observed a black hole consuming cold gas. Feltman notes that “this is the first time a black hole has been seen eating such a refreshing meal: Scientists previously had only observed black holes eating slow, steady meals of hot gas shed by the spiraling galaxies they call home.”

A team of astronomers, including MIT Prof. Michael McDonald, has observed a black hole feasting on cold gas. BBC News reports that the team “discovered a supermassive black hole and saw clouds speeding towards it at 800,000 mph. The observation supports a theory black holes feed on clouds of cold gas.”