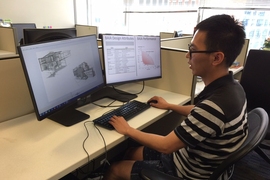 Typically, when architects or engineers design a new building, it’s only at the end of the process — if ever — that a lifecycle analysis of the building’s environmental impact is carried out. And by then, it may be too late to make significant changes. Now, a faster and easier system for doing such analyses could change all that, making the analysis an integral part of the design process from the beginning.

The new process, described in the journal Building and Environment in a paper by MIT researchers Jeremy Gregory, Franz-Josef Ulm and Randolph Kirchain, and recent graduate Joshua Hester PhD ’18, is simple enough that it could be integrated into the software already used by building designers so that it becomes a seamless addition to their design process.

Lifecycle analysis, known as LCA, is a process of examining all the materials; design elements; location and orientation; heating, cooling, and other energy systems; and expected ultimate disposal of a building, in terms of costs, environmental impacts, or both. Ulm, a professor of civil and environmental engineering and director of MIT’s Concrete Sustainability Hub (CSH), says that typically LCA is applied “only when a building is fully designed, so it is rather a post-mortem tool but not an actual design tool.” That’s what the team set out to correct.

“We wanted to address how to bridge that gap between using LCA at the end of the process and getting architects and engineers to use it as a design tool,” he says. The big question was whether it would be possible to incorporate LCA evaluations into the design process without having it impose too many restrictions on the design choices, thus making it unappealing to the building designers. Ulm wondered, “How much does the LCA restrict the flexibility of the design?”

To address that question systematically, the team had to come up with a process of measuring the flexibility of design choices in a quantitative way. They settled on a measure they call “entropy,” analogous to the use of that term in physics. In physics, a system with greater entropy is “hotter,” with its molecules moving around rapidly. In the team’s use of the term, higher entropy represents a greater variety of available choices at a given point, while lower entropy represents a more restricted range of choices.

To the researchers’ surprise, they found use of their LCA system had very little impact on reducing the range of design choices. “That’s the most remarkable result,” Ulm says. When introducing the LCA into the early stages of the design process, “you barely touch the design flexibility,” he says. “I was convinced we would come to a compromise,” where design flexibility would have to be limited in order to gain better lifecycle performance, Ulm says. “But in fact, the results proved me wrong.”

The system looks at the full range of climate impacts from a new structure, including all three phases: construction, including examining the embodied energy in all the materials used in the building; operation of the building, including all of the energy sources needed to provide heating, cooling, and electrical service; and the final dismantling and disposal, or repurposing of the structure, at the end of its service.

To evaluate the lifecycle impact of design choices requires looking at a wide range of factors. These include: the location’s climate (for their research, they chose Arizona and New England as two very different cases of U.S. climate); the building’s dimensions and orientation; the ratio of walls to windows on each side; the materials used for walls, foundations, and roofing; the type of heating and cooling systems used; and so on. As each of these factors gets decided, the range of possibilities for the building get narrower and narrower — but not much more so than in any conventional design process.

At any point, the program “would also provide information about a lot of the things that are not yet defined,” essentially offering a menu of choices that could lead to a more environmentally friendly design, says Kirchain, who is a principal research scientist at MIT and co-director of the CSH, which supported the project.

While designed particularly for reducing the climate impact of a building, the same tool could also be used to optimize a building for other criteria, such as simply to minimize cost, the researchers say.

Thinking about issues such as the ultimate fate of a building at the end of its functional life tends to be “not in the same order of interest for the designing architect, when they first work on a design,” compared to more immediate factors such as how the building will look to the client, and meeting any particular functional requirements for the structure, Ulm says. But if the new LCA tools are integrated right into the design software they are using, then indications of how a given design choice can affect the outcome would be constantly available and able to easily influence choices even in small, subtle ways early in the process.

By comparing the design process with and without the use of such tools, the researchers found that the overall greenhouse gas emissions associated with a building could be reduced by 75 percent “without a reduction in the flexibility of the design process,” Ulm says.

Ulm compares it to indicators in a gym that provide feedback on how many calories are being burned at any point in an exercise regime, providing a constant incentive to improve results — without ever prescribing what exercises the person should do or how to do them.

While the program is currently designed to evaluate relatively simple single-family homes — which represent the vast majority of living spaces in the U.S. — the team hopes to expand it to be able to work on much bigger residential or commercial buildings as well.

At this point, the software the team designed is a standalone package, so “one of our tasks going forward is to actually transition to making it a plug-in to some of the software tools that are out there” for architectural design, says Kirchain.

While there are many software tools available to help with evaluating a building’s environmental impact, Kirchain says, “we don’t see a lot of architects using these tools.” But that’s partly because these tend to be too prescriptive, he says, pointing toward an optimal design and constricting the designer’s choices. “Our theory is that any designer doesn’t want to be told that this is how the design must be. Their role is to design without undue constraints,” he says.