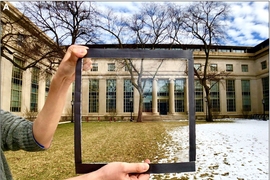 ↓ Download Image
Caption: MIT researchers have developed a coating for windows that rejects up to 70 percent of incoming solar heat.
Credits: Courtesy of the researchers

Caption:
MIT researchers have developed a coating for windows that rejects up to 70 percent of incoming solar heat.
Credits:
Courtesy of the researchers

Caption:
The coating turns frosty when exposed to temperatures of 89 degrees Fahrenheit or higher, such as when a researcher touches the window with her hand.
Credits:
Courtesy of the researchers

To battle the summer heat, office and residential buildings tend to crank up the air conditioning, sending energy bills soaring. Indeed, it’s estimated that air conditioners use about 6 percent of all the electricity produced in the United States, at an annual cost of $29 billion dollars — an expense that’s sure to grow as the global thermostat climbs.

Now MIT engineers have developed a heat-rejecting film that could be applied to a building’s windows to reflect up to 70 percent of the sun’s incoming heat. The film is able to remain highly transparent below 32 degrees Celsius, or 89 degrees Fahrenheit. Above this temperature, the researchers say, the film acts as an “autonomous system” to reject heat. They estimate that if every exterior-facing window in a building were covered in this film, the building's air conditioning and energy costs could drop by 10 percent.

The film is similar to transparent plastic wrap, and its heat-rejecting properties come from tiny microparticles embedded within it. These microparticles are made from a type of phase-changing material that shrinks when exposed to temperatures of 85 degrees Fahrenheit or higher. In their more compact configurations, the microparticles give the normally transparent film a more translucent or frosted look.

Applied to windows in the summer, the film could passively cool a building while still letting in a good amount of light. Nicholas Fang, a professor of mechanical engineering at MIT, says the material provides an affordable and energy-efficient alternative to existing smart window technologies.

“Smart windows on the market currently are either not very efficient in rejecting heat from the sun, or, like some electrochromic windows, they may need more power to drive them, so you would be paying to basically turn windows opaque,” Fang says. “We thought there might be room for new optical materials and coatings, to provide better smart window options.”

Fang and his colleagues, including researchers from the University of Hong Kong, have published their results in the journal Joule.

“A fishnet in water”

Just over a year ago, Fang began collaborating with researchers at the University of Hong Kong, who were keen on finding ways to reduce the energy usage of buildings in the city, particularly in the summer months, when the region grows notoriously hot and air-conditioning usage is at its peak.

“Meeting this challenge is critical for a metropolitan area like Hong Kong, where they are under a strict deadline for energy savings,” says Fang, referring to Hong Kong’s commitment to reduce its energy use by 40 percent by the year 2025.

After some quick calculations, Fang’s students found that a significant portion of a building’s heat comes through windows, in the form of sunlight.

“It turns out that for every square meter, about 500 watts of energy in the form of heat are brought in by sunlight through a window,” Fang says. “That’s equivalent to about five light bulbs.”

Fang, whose group studies the light-scattering properties of exotic, phase-changing materials, wondered whether such optical materials could be fashioned for windows, to passively reflect a significant portion of a building’s incoming heat.

The researchers looked through the literature for “thermochromic” materials — temperature-sensitive materials that temporarily change phase, or color, in response to heat. They eventually landed on a material made from poly (N-isopropylacrylamide)-2-Aminoethylmethacrylate hydrochloride microparticles. These microparticles resemble tiny, transparent, fiber-webbed spheres and are filled with water. At temperatures of 85 F or higher, the spheres essentially squeeze out all their water and shrink into tight bundles of fibers that reflect light in a different way, turning the material translucent.

“It’s like a fishnet in water,” Fang says. “Each of those fibers making the net, by themselves, reflects a certain amount of light. But because there’s a lot of water embedded in the fishnet, each fiber is harder to see. But once you squeeze the water out, the fibers become visible.”

In previous experiments, other groups had found that while the shrunken particles could reject light relatively well, they were less successful in shielding against heat. Fang and his colleagues realized that this limitation came down to the particle size: The particles used previously shrank to a diameter of about 100 nanometers — smaller than the wavelength of infrared light — making it easy for heat to pass right through.

Instead, Fang and his colleagues expanded the molecular chain of each microparticle, so that when it shrank in response to heat, the particle’s diameter was about 500 nanometers, which Fang says is “more compatible to the infrared spectrum of solar light.”

The researchers created a solution of the heat-shielding microparticles, which they applied between two sheets of 12-by-12-inch glass to create a film-coated window. They shone light from a solar simulator onto the window to mimic incoming sunlight, and found that the film turned frosty in response to the heat. When they measured the solar irradiance transmitted through the other side of the window, the researchers found the film was able to reject 70 percent of the heat produced by the lamp.

“That’s a big difference,” Fang says. “You could make a big distinction in comfort.”

“Windows have been one major bottleneck of building efficiency,” says Xiaobo Yin, an associate professor of mechanical engineering at the University of Colorado at Boulder. “Smart windows that regulate solar energy intake can potentially be a game changer. One great advantage of this work is the materials used, which substantially improve applicability and manufacturability of smart windows.”

Going forward, the team plans to conduct more tests of the film to see whether tweaking its formula and applying it in other ways might improve its heat-shielding properties.

This research was funded, in part, by the HKUST-MIT Consortium.

WCVB-TV’s Mike Wankum visits MIT to learn more about Prof. Nicholas Fang’s work developing a new film that can be coated on windows and can block up to 70 percent of incoming solar heat. Wankum explains that the film “could lead to a future with less need for air conditioning.”

UPI reporter Tauren Dyson writes that MIT researchers have developed a coating that can reject up to 70 percent of incoming solar heat. “The film resembles transparent plastic wrap, implanted with tiny microparticles that contain water that releases when met with temperatures higher than 85 degrees Fahrenheit,” Dyson explains.

MIT researchers have developed a new see-through film that reflects 70 percent of the sun’s incoming heat and could be used to coat a building’s windows, reports the Xinhua news agency. The material, “can cool a building while still letting in a good amount of light, offering an affordable and energy-efficient alternative to existing smart window technologies,” Xinhua explains.