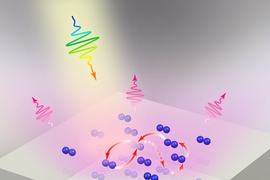 ↓ Download Image
Caption: In this image, light strikes a molecular lattice deposited on a metal substrate. The molecules can quickly exchange energy with the metal below, a mechanism that leads to a much faster response time for the emission of fluorescent light from the lattice.

Caption:
In this image, light strikes a molecular lattice deposited on a metal substrate. The molecules can quickly exchange energy with the metal below, a mechanism that leads to a much faster response time for the emission of fluorescent light from the lattice.

Two-dimensional materials called molecular aggregates are very effective light emitters that work on a different principle than typical organic light-emitting diodes (OLEDs) or quantum dots. But their potential as components for new kinds of optoelectronic devices has been limited by their relatively slow response time. Now, researchers at MIT, the University of California at Berkeley, and Northeastern University have found a way to overcome that limitation, potentially opening up a variety of applications for these materials.

The findings are described in the journal Proceedings of the National Academy of Sciences, in a paper by MIT associate professor of mechanical engineering Nicholas X. Fang, postdocs Qing Hu and Dafei Jin, and five others.

The key to enhancing the response time of these 2-D molecular aggregates (2DMA), Fang and his team found, is to couple that material with a thin layer of a metal such as silver. The interaction between the 2DMA and the metal that is just a few nanometers away boosts the speed of the material’s light pulses more than tenfold.

These 2DMA materials exhibit a number of unusual properties and have been used to create exotic forms of matter, known as Bose-Einstein condensates, at room temperature, while other approaches required extreme cooling. They have also been applied in technologies such as solar cells and light-harvesting organic antennas. But the new work for the first time identifies the strong influence that a very close sheet of metal can have on the way these materials emit light.

In order for these materials to be useful in devices such as photonic chips — which are like semiconductor chips but carry out their operations using light instead of electrons — “the challenge is to be able to switch them on and off quickly,” which had not been possible before, Fang says.

With the metal substrate nearby, the response time for the light emission dropped from 60 picoseconds (trillionths of a second) to just 2 picoseconds, Fang says: “This is pretty exciting, because we observed this effect even when the material is 5 to 10 nanometers away from the surface,” with a spacing layer of polymer in between. That’s enough of a separation that fabricating such paired materials in quantity should not be an overly demanding process. “This is something we think could be adapted to roll-to-roll printing,” he says.

If used for signal processing, such as sending data by light rather than radio waves, Fang says, this advance could lead to a data transmission rate of about 40 gigahertz, which is eight times faster than such devices can currently deliver. This is “a very promising step, but it’s still very early” as far as translating that into practical, manufacturable devices, he cautions.

The team studied only one of the many kinds of molecular aggregates that have been developed, so there may still be opportunities to find even better variations. “This is actually a very rich family of luminous materials,” Fang says.

Because the responsiveness of the material is so strongly influenced by the exact proximity of the nearby metal substrate, such systems could also be used for very precise measuring tools. “The interaction is reduced as a function of the gap size, so it could now be used if we want to measure the proximity of a surface,” Fang says.

As the team continues its studies of these materials, one next step is to study the effects that patterning of the metal surface might have, since the tests so far only used flat surfaces. Other questions to be addressed include determining the useful lifetimes of these materials and how they might be extended.

Fang says a first prototype of a device using this system might be produced “within a year or so.”