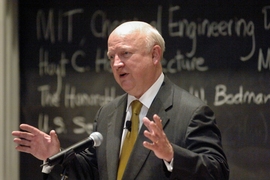 Samuel W. Bodman III ScD ’65, a former MIT associate professor and life member emeritus of the MIT Corporation, who served as the U.S. Secretary of Energy and in other cabinet posts, died on Sept. 7 in El Paso, Texas, after a long illness. He was 79.

Bodman, who earned his doctoral degree from MIT in chemical engineering, served as Secretary of Energy in the George W. Bush administration from 2005 to 2009, after being unanimously confirmed by the Senate. He had previously served as Deputy Secretary of Treasury and Deputy Secretary of Commerce. Bush said in a prepared statement, “Laura and I are deeply saddened by the death of Sam Bodman. Sam had a brilliant mind, and we are fortunate that he put his intellect to work for our country as Secretary of Energy. I am proud that he was a member of my cabinet, and I am proud that he was my friend.”

“Sam led an extraordinary life of leadership and service in business, academia, and government. MIT was the very fortunate beneficiary of his time, talent, and wisdom in so many different capacities over the years. We are saddened by his loss but grateful for his impact on the Institute and well beyond,” says Robert Millard, chair of the MIT Corporation.

Bodman was born in Chicago in 1938 and earned his undergraduate degree in chemical engineering from Cornell University in 1961. He then earned his ScD in chemical engineering at MIT in 1965, where he then began a six-year stint as an associate professor. He later became a station director of what is now called the David H. Koch School of Chemical Engineering Practice, and he served on a landmark commission on the future of MIT education. He became a member of the MIT Corporation, the Institute’s governing body, and served on its Executive and Investment Committees, ultimately becoming a lifetime trustee.

He also served on the boards of Cornell University, the Isabella Stewart Gardner Museum, the New England Aquarium, and the Carnegie Institution for Science. He was a member of the American Academy of Arts and Sciences and the National Academy of Engineering.

His family recalls that a favorite saying of his was, “Every day is another opportunity to excel,” which he liked to say every morning, according to his stepdaughter Caroline Greene.

After leaving MIT, Bodman was technical director of the American Research and Development Corporation, an early venture capital firm, and from there went to Fidelity Venture Associates. He was appointed president and COO of Fidelity Investments in 1983, and also became director of the Fidelity Group of Mutual Funds.

In 1987, he moved to the Cabot Corporation to serve as chairman and CEO, where he served until joining the Bush administration in 2001. “His mind is extraordinarily creative and innovative. He has an ability to see things in a very broad and yet comprehensive way,” Kennett F. Burnes, who worked with Bodman at Cabot and succeeded him as the company’s chief executive, told The Boston Globe at the time of his appointment to be energy secretary.

Though he was born in Chicago and had homes in Florida and Texas as well as Martha’s Vineyard, Bodman remained an avid lifelong fan of the Boston Red Sox and the New England Patriots, his family says. Even during his eight years in Washington, “he made it very plain that those were his most favorite teams,” says his wife Diane Bodman.

Reflecting on his lifelong association with MIT, first as a student, then a professor, and finally a Corporation member, Mrs. Bodman says that “he loved MIT. He thought it was the finest institution in the world of its kind. He felt MIT really changed his life.”

Part of that, she says, was that it gave him “an approach to problems which encouraged a fact-based and insightful view of a problem, whether it was a problem in thermodynamics or a practical life problem.”

“He was a very intense person — he did everything with intensity,” Greene says. “He was a remarkable force in everything he did, both in his professional and personal life.”

Mrs. Bodman adds that “he found humor in most things, most situations. He was always quick to laugh.” Although he enjoyed fly fishing and loved his dogs, “he wasn’t a man who had hobbies. Sam’s favorite activity was work,” she says.

One thing he particularly enjoyed, she says, was “mentoring young people,” whether they were younger workers in the Department of Energy or entrepreneurs he worked with in his venture capital endeavors. “He encouraged thoughtful risk-taking,” she says. “He was a motivator.”

Mrs. Bodman adds that over the years, many of those young people returned to tell him “my life was changed by you.” They would say that lessons they learned by observing the way he worked or ran meetings were something they “carried over into their professional lives, and things they learned from his leadership style they have tried to use in their own careers.”

“He brought out the best in everyone,” Greene adds. “He demanded the best, saw the best, and expected no less from everyone, including himself.”

Corporation member Samuel Bodman passed away in El Pas, TX at the age of 79. Bodman, who earned a doctoral degree in chemical engineering from MIT in 1965, also served as a professor of chemical engineering at the Institute before becoming CEO of Cabot Corp., reports James R. Hagerty for The Wall Street Journal.