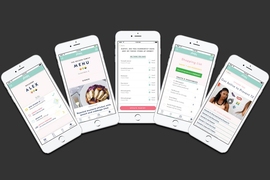 As a busy undergraduate at MIT, Christina Bognet decided she wanted to start eating a healthier diet. She began checking the nutritional content of her food and considering portion sizes. She created grocery lists to minimize food waste and cost, sifting through hundreds of recipes to find ones that were both healthy and delicious. Then she had to figure out how to make the meals she selected.

Bognet pulled it off, losing nearly 50 pounds in her junior and senior year. But she realized that other people, including those with families, demanding jobs, or specific medical conditions, wouldn’t have time to research healthier eating choices and spend hours each week shopping and cooking.

That insight led Bognet to found PlateJoy, a meal-planning platform that tailors food recommendations to each user to help them adopt a healthy diet based on their unique lifestyle and health goals.

When a user subscribes to PlateJoy, they take a quiz featuring more than 50 questions about things like dietary preferences, medical conditions, family size, time constraints, and more. PlateJoy’s algorithm uses the results to choose from thousands of recipes in its database and design a customized meal plan with an accompanying list of ingredients for grocery shopping. Users in over 4,000 cities nationwide can also get the groceries delivered to them the same day through Instacart.

Earlier this year, PlateJoy began offering a program that has been shown to outperform medication in preventing type 2 diabetes. Multiple insurance companies and large employers recently began reimbursing users for the program, which guides participants through an educational videos series and includes a year of personalized meal planning, a free scale, and a Fitbit.

With this development, PlateJoy is less a conventional meal-delivery service and more a digital health company focused on changing lives through food.

“We’re building a new category to bridge the gap between medicine and the modern consumer,” Bognet says. “The PlateJoy approach isn’t to build a sterile, prescriptive health care company. It’s to use cutting-edge research and combine that with a consumer brand that people are really enthusiastic about.”

A change of course

Bognet came to MIT from a small town in rural Pennsylvania. She majored in neuroscience and originally planned to become a doctor. But by her senior year, she realized that some health conditions could be prevented or reversed using the same lifestyle interventions she had used herself. She knew that as a doctor, she could only give her attention to one patient at a time, but by using technology she could create a solution to help millions of people every day.

“I thought, if I really cared about helping people live happier and healthier lives, I should be doing something that could scale to as many people as possible,” Bognet says.

In 2012, Bognet had already taken her pre-med MCAT exams but decided to launch PlateJoy instead of going to medical school. In the years that followed, she partnered with co-founder Dan Nelson, a software developer who currently serves as PlateJoy’s CTO, to build a digital tool that could help people get — and stay — on a healthy eating track.

Bognet says her demanding coursework at MIT gave her confidence that she could overcome challenges that at first seem insurmountable. She also believes her MIT experience put her in the mindset to help others.

“MIT is focused on using technology to help large numbers of people,” Bognet says. “Without an MIT education, I don’t know that I would’ve been as inspired to think about what I was doing on a large scale.”

Before PlateJoy could begin helping vulnerable populations such as those with pre-diabetes, Bognet had to build a sustainable business by offering a solution that could provide value to anyone looking to improve their diet. She interviewed hundreds of people and realized, whatever she built, it would have to be personalized and fit seamlessly into users’ lives. Feature by feature, PlateJoy’s platform was crafted around those two ideas.

PlateJoy sends recipes straight to users’ phones, tracking what they already have in their pantry to reduce waste and simplify trips to the supermarket. The platform also features educational videos on topics such as sleep, nutrition, and fitness. Users can change dietary preferences anytime and add their own recipes to consolidate shopping lists. Additionally, the Instacart partnership allows users to opt for same-day delivery if they don’t want to do the shopping themselves.

Today, Bognet says the service has attracted thousands of subscribers in all 50 states and in 30 countries worldwide. She believes the key to PlateJoy’s success is its ability to craft healthy meal plans that users are likely to stick with.

“The reason most diets fail is because people focus on dieting, not lifestyle changes,” Bognet says. “By understanding a person, what’s available to them, what they can afford, and what they like, we give them something they can stick to in perpetuity.”

Creating a sustainable diet isn’t just necessary to build a business — it’s also the key to achieving health goals and treating diseases. In fact, a 2002 study by the National Institute of Health found that lifestyle intervention was nearly twice as effective at preventing diabetes as metformin, a drug commonly prescribed to people with pre-diabetes.

That data has led health insurance companies and employers to recognize the value of paying for prevention. Over 20 million people with pre-diabetes in the U.S. currently have free access to PlateJoy through their insurer.

“My goal from day one was to build something that’s so good, health insurance companies pay for it in the same way they pay for drugs,” she says. “It’s taken the past few years to get the product to a point where we can get that reimbursement, which empowers patients.”

For Bognet, the goal isn’t to change PlateJoy from a consumer brand company to a health care company, but instead to merge the two in a way that helps the most people possible.

“We want the PlateJoy experience to feel fun and luxurious and of course educational for people, which is different because so many health care products that exist today are anything but that,” Bognet says. “So, we want to make sure we’re taking the consumer seriously. We want to be a trusted source of information while also helping people feel connected to the product in a positive way. When it comes to building great consumer brands, there’s no reason health should be left out. Taking care of yourself and being healthy should be one of the most pleasurable experiences around.”

Even on standardized diet, gut flora change from day to day