The moral calculus of climate change

In a “mathy” philosophy class, students explore the risks, outcomes, and ethical implications of living in a warming world.
School of Humanities, Arts, and Social Sciences
Publication Date:
Press Inquiries 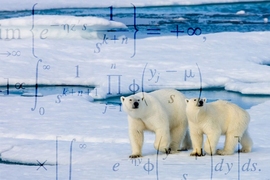 ↓ Download Image
Caption: “If you’re really interested in understanding why we should be doing things about climate change,” says Aldajani, “this class prepares you to talk about the issue coherently at conferences, or with specialists, and make an insightful conclusion.”

Caption:
“If you’re really interested in understanding why we should be doing things about climate change,” says senior Saleem Aldajani, “this class prepares you to talk about the issue coherently at conferences, or with specialists, and make an insightful conclusion.”

Ask students for a standout moment from 24.07 (The Ethics of Climate Change), and they invariably recall the game theory exercise, the Prisoner’s Dilemma, played for sweet stakes provided by Caspar Hare, professor of philosophy.

“During the game, one girl was trying to play cooperatively, but lost to a person who did the selfish thing — and then won,” recalls sophomore Claire McGinnity. “He ended up taking all the chocolate, and Caspar showed no mercy!”

The Prisoner’s Dilemma, a strategy scenario that pits cooperation against self-interest, is a perfect way to puzzle over the difficult dilemmas emerging in a rapidly warming world, suggests Hare.

“With climate change, it may be that some of us are individually better off, short term, driving SUVs, but if we all emit carbon like crazy, we’re all worse off than if none of us do,” says Hare. “Eventually, we might arrive at a point where everybody sees it’s in their best interest to cooperate and reduce emissions."

The “Ethics of Climate Change” brings a moral philosopher’s toolkit to a set of monumental problems: What is the nature of the threat posed by climate change, and given the uncertainties, what should be done about it? Should individuals take action, or governments? Is the current generation responsible for acting on behalf of future citizens?

Kieran Setiya, professor of philosophy, sparked the creation of this course. “I had been interested in and disturbed by climate change for as long as I can remember,” he says. Then, after arriving at MIT in 2014, and engaging with the Fossil Free MIT group, Setiya decided to teach a class. “I thought this would be a useful way to generate sustained attention on the topic,” he says.

With department colleague Caspar Hare, Setiya set out to structure a class that would offer a rigorous foundation for deliberating on climate change questions. “Climate change is a paradigmatically moral issue, because what we’re doing potentially harms others we don’t know,” says Hare. “But the causal path to harm is complicated, and much of the public debate around climate change and potential remedies is coarse grained.”

“We want students to go from feeling distressed by climate change to a clearer understanding of the risks, probable outcomes, and different ways our decisions will affect them,” says Setiya.

The course includes readings from contemporary scholars as well as lectures and exercises designed to promote precise claims and arguments. For some students, the syllabus proved surprising.

“The class wasn’t in line with my initial expectations, but I’m happier the way it ended up,” says sophomore Serena Grown-Haeberli, who is majoring in mechanical engineering. “The emphasis is on the moral frameworks for decision making, applied to climate change, which gives you a way of looking at this big problem from different angles.”

“It was my first philosophy class, and I had an image of old Greek philosophers sitting around talking,” says McGinnity, who works as an operator for MIT’s Nuclear Research Laboratory and is contemplating a major in aeronautics and astronautics. “I didn’t know the field used logic and such mathy language, and it’s a lot more scientific than I imagined.”

For senior Saleem Aldajani, majoring in physics and biological and chemical engineering, the class and its demanding approach has changed how he views the world. “It’s almost like a pure ethics class, with an applied aspect, and it’s really given me a systematic way of asking the right questions — kind of like a moral guide toward my obligations and actions,” says Aldajani, who is from Saudi Arabia and hopes eventually to work on alternative energy technologies.

The class includes a series of challenging topics that, unlike problem sets, do not have quantifiable answers. “In some areas of philosophy, you can rapidly get into a space where there’s no consensus about how the territory should look,” says Hare. “For instance, no one has provided a perfect answer to how we should think about catastrophic risk.”

To be or not to be

Then there is the mind-bending nonidentity problem, which ponders whether actions committed in the present can harm individuals in the future who might not, as a result of these actions, ever exist. Can such actions be judged in a moral context? Discuss.

“If we have massive change in climate policies now, that might mean different people live in the future, and not those who would live if we continued with the same energy policies,” says McGinnity.

“Using that argument as a framework, the reason to prevent climate change can’t be because it might harm future individuals,” suggests Grown-Haeberli, “because they won’t be worse off for us not fixing the problem.”

“This may be about improving the kind of moral reasoning we use to do things that affect future generations,” says Aldajani, “When it comes to climate change, our response may be not about avoiding harm or making the world a better place, but about fulfilling a duty of justice by reducing emissions.”

It’s one of the class’s “trippy problems,” in the words of Grown-Haeberli, which sticks with students beyond the classroom. “This course makes you think consciously about complicated things that don’t have intuitive answers, and shows how to approach questions in a consistent, logical way, giving you good justifications for your actions,” says Grown-Haeberli.

“If you’re really interested in understanding why we should be doing things about climate change,” says Aldajani, “this class prepares you to talk about the issue coherently at conferences, or with specialists, and make an insightful conclusion.”

This, of course, is music to the ears of an instructor.

“Teaching MIT students is an investment in a bunch of brilliant young people who will make impacts in all kinds of ways,” says Setiya. “I hope that our students may have a broader impact on climate change, by thinking and coming to understand the issue, and then engaging others in rigorous conversation about it.”

3 Questions: How philosophy can address the problem of climate change

You, yourself and you