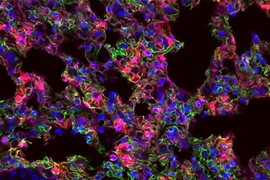 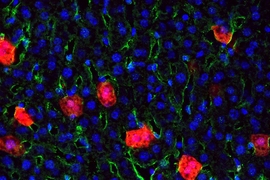 Caption:
MIT researchers have designed nanoparticles that can deliver messenger RNA to specific organs, in this case, the liver. Cells expressing the synthetic mRNA show up as red.
Credits:
Image: Piotr Kowalski

In an advance that could lead to new treatments for a variety of diseases, MIT researchers have devised a new way to deliver messenger RNA (mRNA) into cells.

Because mRNA molecules are so large, researchers have had difficulty designing ways to efficiently get them inside cells. It has also been a challenge to deliver mRNA to specific organs in the body. The new MIT approach, which involves packaging mRNA into polymers called amino-polyesters, addresses both of those obstacles.

Cells use mRNA to carry protein-building instructions from DNA to ribosomes, where proteins are assembled. By delivering synthetic mRNA to cells, researchers hope to be able to stimulate cells to produce proteins that could be used to treat disease. Scientists have developed some effective methods for delivering smaller RNA molecules, and a number of these materials have shown potential in clinical trials.

The MIT team decided to package mRNA into new polymers called amino-polyesters. These polymers are biodegradable, and unlike many other delivery polymers, they do not have a strong positive charge, which may make them less likely to damage cells.

To create the polymers, the researchers used an approach that allows them to control the properties of the polymer, such as its molecular weight. This means that the quality of the polymers produced will be the similar in each batch, which is important for clinical transition and often not the case with other polymer synthesis methods.

“Being able to control the molecular weight and the properties of your material helps to be able to reproducibly make nanoparticles with similar qualities, and to produce carriers starting from building blocks that are biocompatible could reduce their toxicity,” Capasso Palmiero says.

“It makes clinical translation much harder if you don’t have control over the reproducibility of the delivery system and the released degradation products, which is a challenge for polymer-based nucleic acid delivery,” Kowalski says.

For this study, the researchers created a diverse library of polymers that varied in the composition of amino-alcohol core and the lactone monomers. The researchers also varied the length of polymer chains and the presence of carbon atom side chains in the lactone subunits.

After creating about three dozen different polymers, the researchers combined them with lipids, which help stabilize the particles, and encapsulated mRNA within the nanoparticles.

In tests in mice, the researchers identified several particles that could effectively deliver mRNA to cells and induce the cells to synthesize the protein encoded by the mRNA. To their surprise, they also found that several of the nanoparticles appeared to preferentially accumulate in certain organs, including the liver, lungs, heart, and spleen. This kind of selectivity may allow researchers to deliver specific therapies to certain locations in the body.

“It is challenging to achieve tissue-specific mRNA delivery,” says Yizhou Dong, an associate professor of pharmaceutics and pharmaceutical chemistry at Ohio State University, who was not involved in the research. “The findings in this report are very exciting and provide new insights on chemical features of polymers and their interactions with different tissues in vivo. These novel polymeric nanomaterials will facilitate systemic delivery of mRNA for therapeutic applications.”

The researchers did not investigate what makes different nanoparticles go to different organs, but they hope to further study that question. Particles that specifically target different organs could be very useful for treating lung diseases such as pulmonary hypertension, or for delivering vaccines to immune cells in the spleen, Kowalski says. Another possible application is using the particles to deliver mRNA encoding the proteins required for the genome-editing technique known as CRISPR-Cas9, which can make permanent additions or deletions to a cell’s genome.

Anderson’s lab is now working in collaboration with researchers at the Polytechnic University of Milan on the next generation of these polymers in hopes of improving the efficiency of RNA delivery and enhancing the particles’ ability to target specific organs.

“There is definitely a potential to increase the efficacy of these materials by further modifications, and also there is potential to hopefully find particles with different organ-specificity by extending the library,” Kowalski says.

The research was funded by the U.S. Defense Advanced Research Projects Agency and the Progetto Roberto Rocca.