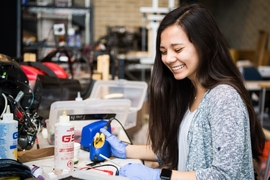 ↓ Download Image
Caption: Alexa Aguilar is co-president of MIT’s Graduate Women in Aerospace Engineering (GWAE) group. “It's important to me that women have this kind of support and encouragement because I wouldn’t be here without the support of women,” she says.
Credits: Photo: Joseph Lee

Caption:
Alexa Aguilar is co-president of MIT’s Graduate Women in Aerospace Engineering (GWAE) group. “It's important to me that women have this kind of support and encouragement because I wouldn’t be here without the support of women,” she says.
Credits:
Photo: Joseph Lee

Along with asteroids, the moon, and the International Space Station, there are hundreds of small, 10-centimeter cubes orbiting planet Earth. Alexa Aguilar, a first-year graduate student in the Department of Aeronautics and Astronautics, is helping these small satellites, called CubeSats, communicate.

“We’d like to expand this to what we call ‘swarm technology.’ Imagine you have three, four, up to, you know, x-amount of little cubes that can talk to each other with lasers,” she explains.“You could have these massive constellations of them! For example, you could have a cluster [of CubeSats] here, a cluster there, and each of the clusters has its own camera. They could talk to each other with lasers, and they could send imaging data, and you could computationally mesh all of the [individual] pictures that they’re taking to form a massive picture in space.”

A picture like this could offer a cost-effective way to monitor Earth. In cases of natural disasters, which require rapid response and constant updates, such observational capabilities could be life-saving.

Aguilar is a builder of connections in many other aspects of her life as well. A space enthusiast, supporter of women in STEM, and mentor to other AeroAstro students, she exudes a natural warmth and self-assurance that brings people together.

Discovering herself in Cambridge

As an electrical engineering student at the University of Idaho, Aguilar didn’t always foresee herself at MIT. “My path to MIT really blossomed out of a summer internship at NASA’s Jet Propulsion Laboratory (JPL) when I was in undergrad,” she says. “I met a lot of awesome people, and everyone was doing something more incredible than the last person I’d heard.”

Some of the friends she made there encouraged her to look into the Space Telecommunications, Astronomy, and Radiation Laboratory (STAR Lab), where Aguilar now does her research.

Despite the many friendships she has forged at MIT, Aguilar sometimes struggles with the distance from her close-knit family in Idaho. Sundays are her unofficial Skype day with her mom, with whom she is particularly close. (They share a hard-headedness, Aguilar says with a smile.) Luckily, New England offers at least one of the comforts of home: Aguilar is an avid skier. This winter she attended the yearly MIT Graduate Student Council ski trip with her AeroAstro and JPL colleagues — along with some new MIT friends.

Aguilar enjoys the modern energy of Cambridge, calling it “a really nice mesh of cutting-edge technology and young, excited people who want to do cool things with it.” She also takes full advantage of the cultural opportunities in the area. She and her boyfriend share an avid interest in Japanese art and culture, and enjoy visiting the Museum of Fine Arts, which houses one of the largest collections of Japanese art in the world outside of Japan. Most recently, they visited a vibrant exhibit by artist Takashi Murakami.

Aguilar also circulates among the area restaurants, which she has thoroughly researched. “I’m trying really hard to be a foodie,” she laughs earnestly. Her favorite area restaurant, Coreanos, offers Korean-Mexican fusion — perhaps not coincidentally, this reflects Aguilar’s own heritage.

Aguilar’s mother is Korean and her father is Mexican and Native American, but Aguilar’s upbringing wasn’t strongly influenced by her parents’ ethnic backgrounds. Recently, though, Aguilar has felt pulled to explore her Mexican heritage more fully.

“It’s actually been a really interesting journey in discovering what my cultural background means to me,” she says. Aguilar recalls her grandfather, a Mexican immigrant, telling her she didn’t need to learn Spanish as a child. However, she also recalls seeing him transform into a new person at his favorite Mexican restaurant, where he would banter with the cooks and servers in his native language.

Though he has recently passed away, Aguilar and her sister are actively trying to use Spanish to feel closer to their grandfather and to understand his heritage: “[I think about] the little ways he did pass his culture on that he didn’t realize. … It’s like discovering a part of myself.”

Another activity close to Aguilar’s heart is her involvement with Graduate Women in Aerospace Engineering (GWAE), a student group geared toward recruiting and supporting women in the AeroAstro department at MIT. “We have an incredible support group. The GWAE [members] are all pretty tight-knit, which is exactly the kind of community we are trying to foster,” she says.

The group has four arms: community building, a women-in-STEM speaker series, mentorship, and outreach and recruitment. As the current co-president of GWAE, Aguilar is involved in all of these efforts. “It's important to me that women have this kind of support and encouragement because I wouldn’t be here without the support of women,” she says.

Aguilar welcomes the opportunity to build that same support in AeroAstro today.

She has many thoughts on why more women don’t pursue graduate work in aerospace engineering: “I think what happens … is a lot of women undergraduates go into industry — which is awesome, we’re really happy about that because it means a lot of them get job offers and they’re excited to go out and work. But most of the incoming graduate women come from undergraduate aerospace programs, and I think a lot of women [from other fields] may be intimidated to apply to the program. So then we don’t have the input to compensate for the number of women who have gone off to industry.”

As such, GWAE works hard to make the department seem approachable — a task to which Aguilar seems particularly well-suited.

She is grateful to have a female advisor in Kerri Cahoy, the Rockwell International Career Development Professor, whom she deeply admires. “She’s a rock star. She’s amazing — I don’t know how she does it. She’s involved in multiple flight projects, which are projects that are bound for orbit … she has a career, she has a family, she’s super successful. … [I want to say,] teach me your secrets!”

Aguilar is also a mentor to undergraduate women in the department and delights in helping her mentees secure the best internships and other opportunities that they can.

While Aguilar is still deciding whether to pursue a doctoral degree in the AeroAstro program or to conclude her work with a master’s degree, she is confident that she will remain involved in space research and engineering. Space, to Aguilar, is less a frontier than a dynamo for scientific progress: It generates research that, when applied, will eventually also transform more down-to-Earth technologies.

“Space research is going to be where so much exciting new science and technology comes from,” Aguilar says. “You hear a lot about Mars 2020 … but the technology it takes to get us there is actually really incredible. I’m excited to see emergent applications like how our internet is going change because we’re trying to get people to Mars. We need the same technology to send a message to the moon that we need to relay to Mars, and it’s that technology that’s going to have global impact.”

Two from AeroAstro named to Aviation Week's “20 Twenties” for 2018

AeroAstro announces graduate fellowships for women and other underrepresented students