It’s nearly impossible to break a dry spaghetti noodle into only two pieces. A new MIT study shows how and why it can be done.
Jennifer Chu | MIT News Office
Publication Date:
Press Inquiries 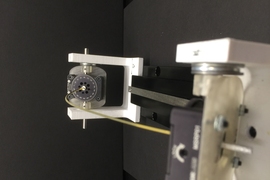 ↓ Download Image
Caption: Could a dry spaghetti noodle ever be coerced to break into only two pieces?
Credits: Courtesy of the researchers. 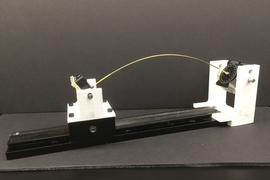 ↓ Download Image
Caption: To investigate, MIT researchers carried out experiments with hundreds of spaghetti sticks, bending and twisting them with an apparatus they built specifically for the task.
Credits: Courtesy of the researchers. 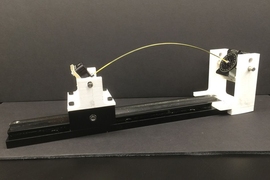 ↓ Download Image
Caption: The team found that if a stick is twisted past a certain critical degree, then slowly bent in half, it will, against all odds, break in two.
Credits: Courtesy of the researchers.

Caption:
Could a dry spaghetti noodle ever be coerced to break into only two pieces?
Credits:
Courtesy of the researchers.

Caption:
To investigate, MIT researchers carried out experiments with hundreds of spaghetti sticks, bending and twisting them with an apparatus they built specifically for the task.
Credits:
Courtesy of the researchers.

Caption:
The team found that if a stick is twisted past a certain critical degree, then slowly bent in half, it will, against all odds, break in two.
Credits:
Courtesy of the researchers.

If you happen to have a box of spaghetti in your pantry, try this experiment: Pull out a single spaghetti stick and hold it at both ends. Now bend it until it breaks. How many fragments did you make? If the answer is three or more, pull out another stick and try again. Can you break the noodle in two? If not, you’re in very good company.

The spaghetti challenge has flummoxed even the likes of famed physicist Richard Feynman ’39, who once spent a good portion of an evening breaking pasta and looking for a theoretical explanation for why the sticks refused to snap in two.

Feynman’s kitchen experiment remained unresolved until 2005, when physicists from France pieced together a theory to describe the forces at work when spaghetti — and any long, thin rod — is bent. They found that when a stick is bent evenly from both ends, it will break near the center, where it is most curved. This initial break triggers a “snap-back” effect and a bending wave, or vibration, that further fractures the stick. Their theory, which won the 2006 Ig Nobel Prize, seemed to solve Feynman’s puzzle. But a question remained: Could spaghetti ever be coerced to break in two?

The answer, according to a new MIT study, is yes — with a twist. In a paper published this week in the Proceedings of the National Academy of Sciences, researchers report that they have found a way to break spaghetti in two, by both bending and twisting the dry noodles. They carried out experiments with hundreds of spaghetti sticks, bending and twisting them with an apparatus they built specifically for the task. The team found that if a stick is twisted past a certain critical degree, then slowly bent in half, it will, against all odds, break in two.

The researchers say the results may have applications beyond culinary curiosities, such as enhancing the understanding of crack formation and how to control fractures in other rod-like materials such as multifiber structures, engineered nanotubes, or even microtubules in cells.

“It will be interesting to see whether and how twist could similarly be used to control the fracture dynamics of two-dimensional and three-dimensional materials,” says co-author Jörn Dunkel, associate professor of physical applied mathematics at MIT. “In any case, this has been a fun interdisciplinary project started and carried out by two brilliant and persistent students — who probably don’t want to see, break, or eat spaghetti for a while.”

Experiments (above) and simulations (below) show how dry spaghetti can be broken into two or more fragments, by twisting and bending.

Heisser, together with project partner Edgar Gridello, originally took up the challenge of breaking spaghetti in the spring of 2015, as a final project for 18.354 (Nonlinear Dynamics: Continuum Systems), a course taught by Dunkel. They had read about Feynman’s kitchen experiment, and wondered whether spaghetti could somehow be broken in two and whether this split could be controlled.

“They did some manual tests, tried various things, and came up with an idea that when he twisted the spaghetti really hard and brought the ends together, it seemed to work and it broke into two pieces,” Dunkel says. “But you have to twist really strongly. And Ronald wanted to investigate more deeply.”

So Heisser built a mechanical fracture device to controllably twist and bend sticks of spaghetti. Two clamps on either end of the device hold a stick of spaghetti in place. A clamp at one end can be rotated to twist the dry noodle by various degrees, while the other clamp slides toward the twisting clamp to bring the two ends of the spaghetti together, bending the stick.

Heisser and Patil used the device to bend and twist hundreds of spaghetti sticks, and recorded the entire fragmentation process with a camera, at up to a million frames per second. In the end, they found that by first twisting the spaghetti at almost 360 degrees, then slowly bringing the two clamps together to bend it, the stick snapped exactly in two. The findings were consistent across two types of spaghetti: Barilla No. 5 and Barilla No. 7, which have slightly different diameters.

Experiments (above) and simulations (below) show how dry spaghetti can be broken into two or more fragments, by twisting and bending.

In parallel, Patil began to develop a mathematical model to explain how twisting can snap a stick in two. To do this, he generalized previous work by the French scientists Basile Audoly and Sebastien Neukirch, who developed the original theory to describe the “snap-back effect,” in which a secondary wave caused by a stick’s initial break creates additional fractures, causing spaghetti to mostly snap in three or more fragments.

Patil adapted this theory by adding the element of twisting, and looked at how twist should affect any forces and waves propagating through a stick as it is bent. From his model, he found that, if a 10-inch-long spaghetti stick is first twisted by about 270 degrees and then bent, it will snap in two, mainly due to two effects. The snap-back, in which the stick will spring back in the opposite direction from which it was bent, is weakened in the presence of twist. And, the twist-back, where the stick will essentially unwind to its original straightened configuration, releases energy from the rod, preventing additional fractures.

“Once it breaks, you still have a snap-back because the rod wants to be straight,” Dunkel explains. “But it also doesn’t want to be twisted.”

Just as the snap-back will create a bending wave, in which the stick will wobble back and forth, the unwinding generates a “twist wave,” where the stick essentially corkscrews back and forth until it comes to rest. The twist wave travels faster than the bending wave, dissipating energy so that additional critical stress accumulations, which might cause subsequent fractures, do not occur.

“That’s why you never get this second break when you twist hard enough,” Dunkel says.

The team found that the theoretical predictions of when a thin stick would snap in two pieces, versus three or four, matched with their experimental observations.

“Taken together, our experiments and theoretical results advance the general understanding of how twist affects fracture cascades,” Dunkel says.

For now, he says the model is successful at predicting how twisting and bending will break long, thin, cylindrical rods such as spaghetti. As for other pasta types?

“Linguini is different because it’s more like a ribbon,” Dunkel says. “The way the model is constructed it applies to perfectly cylindrical rods. Although spaghetti isn’t perfect, the theory captures its fracture behavior pretty well,”

The research was supported, in part, by the Alfred P. Sloan Foundation and the James S. McDonnell Foundation.

CNN reporter Don Lincoln writes that MIT researchers have discovered that it is possible to break a strand of dry spaghetti in two. Lincoln explains that the findings have applications "beyond making dinner. The calculations apply more generally to determining the crack formation of other rod-like structures, like poles used in pole vaulting and other engineering situations.”

Graduate student Vishal Patil speaks with NPR’s Rebecca Hersher about his work determining how to snap dry spaghetti in two. Patil found that, “when you twist it, you don't have to bend it as much before it breaks. When there's less bending in it, the snap-back — as the spaghetti tries to become a straight rod again — is weakened, so that no more fractures can occur.”

Using mathematical modeling, a mechanical fracture device and a camera, MIT researchers found that dry spaghetti can be split into two pieces, reports Allyson Chiu for The Washington Post. The findings could be applied to studying fracturing, explains graduate student Vishal Patil, who notes that, “there’s still a lot to be discovered about fracture control, and this is an example of fracture control.”

TODAY reporter Alessandra Bulow speaks with Prof. Jörn Dunkel about how he and his colleagues figured out how to snap a strand of spaghetti without it shattering into many pieces. Bulow notes that the noodles must be bent and twisted at the same time, and “you have to twist really strongly,” explains Dunkel.

A study by MIT researchers shows that by twisting and bending dry spaghetti past a certain angle, the noodles can be successfully split into two pieces, reports Travis Anderson for The Boston Globe. Anderson explains that the breakthrough, “could have implications far beyond the kitchen,” and could shed light on crack formation and how to control fractures in rod-like materials.

UPI reporter Brooks Hays writes that MIT researchers have successfully snapped a strand of spaghetti into only two pieces, solving an age-old mystery about why dry spaghetti noodles typically break into many pieces. “Scientists believe the discovery could help material scientists control for the fracturing patterns in other materials,” explains Hays.

New Scientist reporter Frank Swain writes that MIT researchers have snapped dry spaghetti into two pieces, shedding light on the “conditions under which similar materials, such as steel rods in buildings, fracture under stress.” Prof. Jörn Dunkel explains that the spaghetti challenge has perplexed scientists for years, as it’s “one of those intrinsically interesting things that goes on around us.”

A mathematical view on cell packing