Inside "The Laughing Room"

Caption:
Video from "The Laughing Room," an interactive installation at Cambridge Public Library, was shown live on monitors at Hayden Library and streamed online.
Credits:
Still photos courtesy of metaLAB (at) Harvard.

“The Laughing Room,” an interactive art installation by author, illustrator, and MIT graduate student Jonathan "Jonny" Sun, looks like a typical living room: couches, armchairs, coffee table, soft lighting. This cozy scene, however, sits in a glass-enclosed space, flanked by bright lights and a microphone, with a bank of laptops and a video camera positioned across the room. People wander in, take a seat, begin chatting. After a pause in the conversation, a riot of canned laughter rings out, prompting genuine giggles from the group.

Presented at the Cambridge Public Library in Cambridge, Massachusetts, Nov. 16-18, "The Laughing Room" was an artificially intelligent room programmed to play an audio laugh track whenever participants said something that its algorithm deemed funny. Sun, who is currently on leave from his PhD program within the MIT Department of Urban Studies and Planning, is an affiliate at the Berkman Klein Center for Internet and Society at Harvard University, and creative researcher at the metaLAB at Harvard, created the project to explore the increasingly social and cultural roles of technology in public and private spaces, users’ agency within and dependence on such technology, and the issues of privacy raised by these systems. The installations were presented as part of ARTificial Intelligence, an ongoing program led by MIT associate professor of literature Stephanie Frampton that fosters public dialogue about the emerging ethical and social implications of artificial intelligence (AI) through art and design. 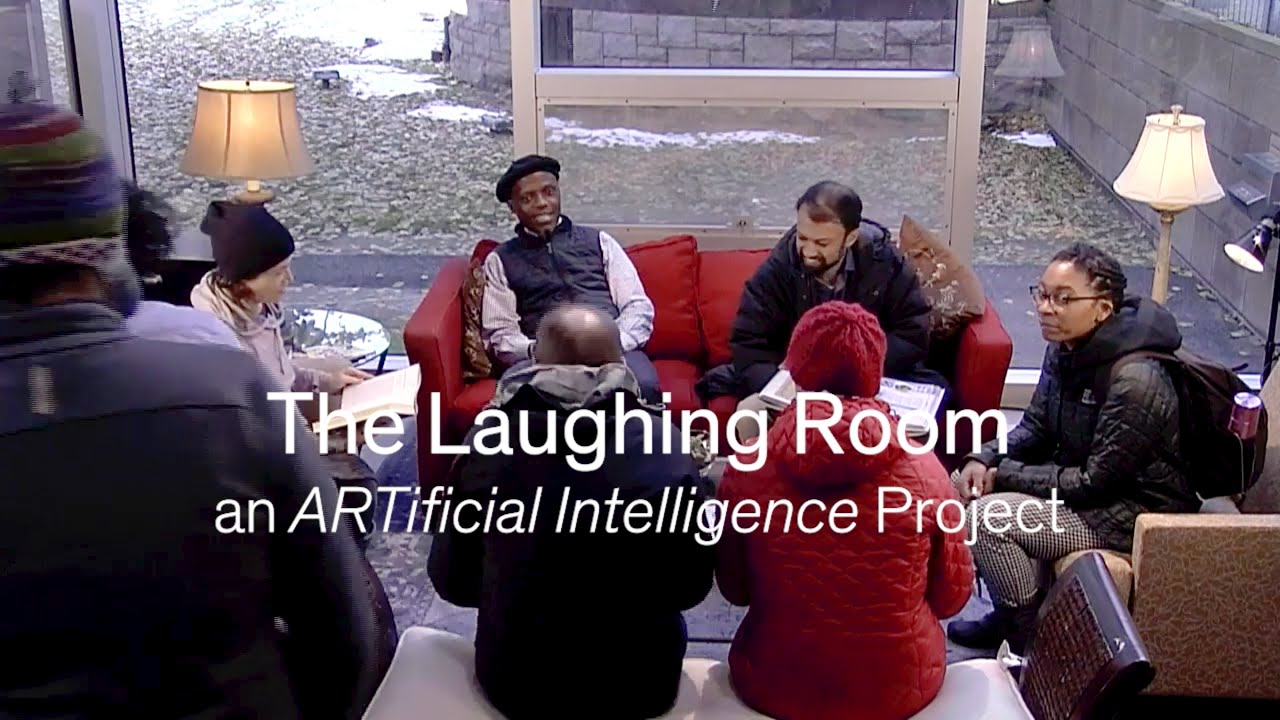 “Cambridge is the birthplace of artificial intelligence, and this installation gives us an opportunity to think about the new roles that AI is playing in our lives every day,” said Frampton. “It was important to us to set the installations in the Cambridge Public Library and MIT Libraries, where they could spark an open conversation at the intersections of art and science.”

“I wanted the installation to resemble a sitcom set from the 1980s–a private, familial space,” said Sun. “I wanted to explore how AI is changing our conception of private space, with things like the Amazon Echo or Google Home, where you’re aware of this third party listening.”

"The Control Room," a companion installation located in Hayden Library at MIT, displayed a live stream of the action in "The Laughing Room," while another monitor showed the algorithm evaluating people’s speech in real time. Live streams were also shared online via YouTube and Periscope. “It’s an extension of the sitcom metaphor, the idea that people are watching,” said Sun. The artist was interested to see how people would act, knowing they had an audience. Would they perform for the algorithm? Sun likened it to Twitter users trying to craft the perfect tweet so it will go viral.

Davis explained how, to train the algorithm, she scraped stand-up comedy routines from YouTube, selecting performances by women and people of color to avoid programming misogyny and racism into how the AI identified humor. “It determines what is the setup to the joke and what shouldn’t be laughed at, and what is the punchline and what should be laughed at,” said Davis. Depending on how likely something is to be a punchline, the laugh track plays at different intensities.

Sun acknowledged that the reactions from "The Laughing Room" participants have been mixed: “Half of the people came out saying ‘that was really fun,’” he said. “The other half said ‘that was really creepy.’”

That was the impression shared by Colin Murphy, a student at Tufts University who heard about the project from following Sun on Twitter: “This idea that you are the spectacle of an art piece, that was really weird.”

“It didn’t seem like it was following any kind of structure,” added Henry Scott, who was visiting from Georgia. “I felt like it wasn’t laughing at jokes, but that it was laughing at us. The AI seems mean.”

While many found the experience of "The Laughing Room" uncanny, for others it was intimate, joyous, even magical.

“There’s a laughter that comes naturally after the laugh track that was interesting to me, how it can bring out the humanness,” said Newman at the panel discussion. “The work does that more than I expected it to.”

Frampton noted how the installation’s setup also prompted unexpected connections: “It enabled strangers to have conversations with each other that wouldn’t have happened without someone listening.”

Continuing his sitcom metaphor, Sun described these first installations as a “pilot,” and is looking forward to presenting future versions of "The Laughing Room." He and his collaborators will keep tweaking the algorithm, using different data sources, and building on what they’ve learned through these installations. "The Laughing Room" will be on display in the MIT Wiesner Student Art Gallery in May 2019, and the team is planning further events at MIT, Harvard, and Cambridge Public Library throughout the coming year.

“This has been an extraordinary collaboration and shown us how much interest there is in this kind of programming and how much energy can come from using the libraries in new ways,” said Frampton.

"The Laughing Room" and "The Control Room" were funded by the metaLAB (at) Harvard, the MIT De Florez Fund for Humor, the Council of the Arts at MIT, and the MIT Center For Art, Science and Technology and presented in partnership with the Cambridge Public Library and the MIT Libraries.

Featured video: On alien typos and self-care, in conversation with Seth Meyers