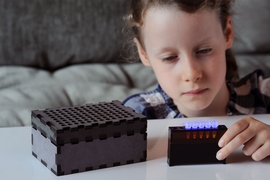 ↓ Download Image
Caption: To help students gain a better grasp of biological concepts, MIT and Northwestern University researchers have designed new educational kits that can be used to perform experiments that produce glowing proteins, scents, or other easily observed phenomena, through the engineering of DNA.
Credits: Image: Felice Frankel 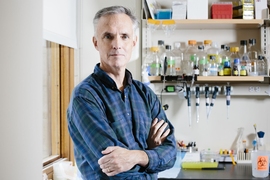 Caption:
To help students gain a better grasp of biological concepts, MIT and Northwestern University researchers have designed new educational kits that can be used to perform experiments that produce glowing proteins, scents, or other easily observed phenomena, through the engineering of DNA.
Credits:
Image: Felice Frankel

To help students gain a better grasp of biological concepts, MIT and Northwestern University researchers have designed educational kits that can be used to perform experiments with DNA, to produce glowing proteins, scents, or other easily observed phenomena.

Biology teachers could use the BioBits kits to demonstrate key concepts such as how DNA is translated into proteins, or students could use them to design their own synthetic biology circuits, the researchers say.

“Our vision is that these kits will serve as a creative outlet for young individuals, and show them that biology can be a design platform,” says James Collins, the Termeer Professor of Medical Engineering and Science in MIT’s Institute for Medical Engineering and Science (IMES) and Department of Biological Engineering. “The time is right for creating educational kits that could be utilized in classrooms or in the home, to introduce young folks as well as adults who want to be retrained in biotech, to the technologies that underpin synthetic biology and biotechnology.”

The new kits contain no living cells but instead consist of freeze-dried cellular components, which makes them inexpensive, shelf-stable, and accessible to any classroom, even in schools with minimal resources.

“Synthetic biology is a technology for the 21st century, and these ‘just add water’ kits are poised to transform synthetic biology education. Indeed, BioBits kits are user-friendly, engage the senses in a fun and exciting way, and reduce biosafety concerns,” says Michael Jewett, the Charles Deering McCormick Professor of Teaching Excellence, an associate professor of chemical and biological engineering, and co-director of the Center for Synthetic Biology at Northwestern University, who led the research team with Collins.

In recent years, Collins’ lab has been working on technology to extract and freeze-dry the molecular machinery needed to translate DNA into proteins. They developed freeze-dried pellets, which contain dozens of enzymes and other molecules extracted from cells, and can be stored for an extended period of time at room temperature. Upon the addition of water and DNA, the pellets begin producing proteins encoded by the DNA.

The Collins and Jewett labs recently began to adapt this technology to educational biology kits, in hopes of bringing hands-on, laboratory experiences to high school students, as well as younger students.

“I fell in love with biology in high school, but I never really truly understood the biological concepts until college, when I started working in a research lab and actually doing all the real experiments,” says Huang, who took on the project after joining Collins’ lab a few years ago. “The intent of this project was to find a way to bring these laboratory experiments into a nonlaboratory setting in an easy-to-do and cheap way.”

The researchers set out to create the equivalent of the toy chemistry kit, which allows users to perform their own simple chemical reactions at home.

“One of the best gifts I got as a kid was a chemistry kit,” Collins says. “I did all the prescribed reactions and then went off-script and created my own reactions, some of which were probably not recommended. But I had a tremendous time, and, like many faculty here, was inspired, in part, to consider a career in science because of those kits.”

Similar kits are available to help children build their own simple electronic or robotic systems, but right now, the researchers say, there is no cost-effective equivalent for biology. One reason for that is that most biology experiments involve living cells, which require expensive equipment to keep them alive and can also pose safety risks. The MIT and Northwestern researchers were able to overcome that obstacle with their freeze-dried cellular components.

“The goal was to create a kit where the teacher could open the box and hand out all the components to the kids, without any prep time,” Huang says. “You add the water that contains your DNA to these freeze-dried pellets, and just by doing that the kids can produce a variety of different proteins, and visualize or sense different outputs from these proteins.”

The BioBits Bright kit is based on fluorescent proteins. The kit includes tubes with freeze-dried pellets containing all of the cellular components needed to translate DNA into proteins, as well as DNA that encodes fluorescent proteins of several different colors. Students can add DNA to the pellets, put the tubes into an inexpensive incubator the researchers designed, and then image them using a $15 device that the researchers also developed.

This kind of experimentation, which allows students to vary the amount of DNA added, length of incubation, and temperature of the reaction, helps students to grasp firsthand the “central dogma” of biology: how information encoded by genes flows from DNA to RNA to proteins. The kit can be produced for less than $100 for a classroom of 30 students, making it feasible for use in schools with limited budgets.

In the BioBits Explorer kit, the researchers included DNA that encodes proteins with outputs other than fluorescence, helping to teach additional biological concepts such as reaction catalysis. One DNA sequence included in the kit codes for an enzyme that converts isoamyl alcohol into banana oil, producing a distinctive scent. Another DNA sequence produces an enzyme that can catalyze the formation of hydrogels. The kit also allows students to extract DNA from a fruit such as a banana or kiwi and then test it with a sensor that can distinguish between DNA sequences found in different types of fruit.

In addition to classroom experiments, the researchers believe these kits could be useful for school science clubs where students could “mix and match the components and try to come up with new reactions, or experiment to find what new combinations of outputs they could make,” Huang says.

In trial runs in the Chicago public schools, which began last year, the researchers found that students ranging in age from elementary school to high school were able to successfully perform their own experiments using the kits.

“Seeing the students’ and teachers’ results, which showed that a first-time user could run the BioBits Bright labs successfully, was when it started to become real,” Stark says. “That data gives us evidence that these kits have the potential to significantly expand the kinds of hands-on biology activities that are possible in classrooms or other non-lab settings.”

The team is now building new prototypes of the BioBits Bright kit that will be tested in high schools in Boston, Cambridge, and Chicago this fall. The researchers have launched a website to help enable the creation of an open source community that would allow teachers to add their own supporting curriculum, and scientists to add new components to the kits.

“Eventually, we hope to form a larger community of scientists and educators who are interested in continuing to translate cutting-edge science into hands-on educational experiences,” Stark says.

The researchers hope that the kits will not only help students grasp the connections between what they learn from their biology textbook and real-life biological events, but also stimulate their interest in careers in biology or other science, technology, engineering, and mathematics (STEM) fields.

“We want the BioBits kits to help students see themselves as scientists and hope that these open-access kits might inspire the next generation of students to pursue STEM education,” Jewett says.

The research was funded, in part, by the Army Research Office, the National Science Foundation, the Air Force Research Laboratory Center of Excellence, the Defense Threat Reduction Agency, the David and Lucile Packard Foundation, the Camille Dreyfus Teacher-Scholar Program, and the Department of Energy.

MIT alumna Ally Huang speaks with WCVB-TV’s Mike Wankum about BioBits, educational biology kits developed in the lab of Prof. James Collins that allow students hands-on experience experimenting with DNA. “Biobits was created to show the students visually how DNA goes to RNA goes to protein, what DNA is, what protein is,” Huang explains.

Reporting for WBUR’s CommonHealth, Carey Goldberg highlights new classroom kits developed by MIT researchers that allow kids to learn and experiment with the building blocks of DNA. "I just think it's really important that microbiology education is accessible for everyone," says graduate student Ally Huang, "and that everyone, regardless of their resources, has access to things like this."