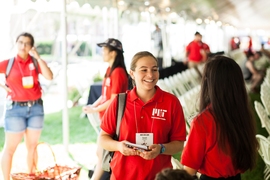 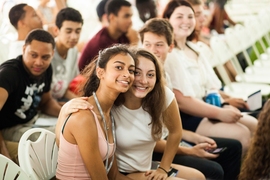 ↓ Download Image
Caption: The Class of 2022, their families, and friends gathered on Kresge Oval August 27 for the President’s Convocation.
Credits: Photo: Jake Belcher 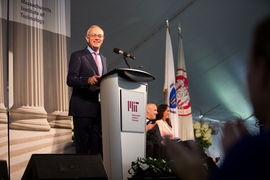 ↓ Download Image
Caption: President Reif reminded MIT freshmen, “You belong here…If you have doubts about yourself, it is just a sign that you are learning!”
Credits: Photo: Jake Belcher 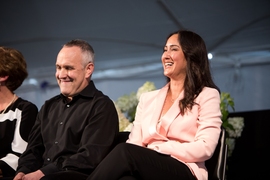 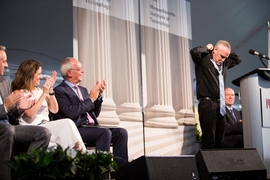 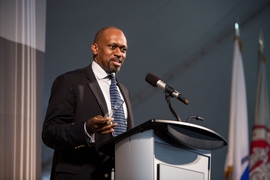 ↓ Download Image
Caption: Professor Collin Stultz of the Institute for Medical Engineering and Science welcomed the Class of 2022 into the MIT family.
Credits: Photo: Jake Belcher 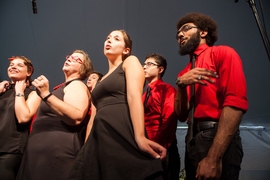 ↓ Download Image
Caption: The Chorallaries of MIT led the class in their first singing of the MIT School Song.
Credits: Photo: Jake Belcher 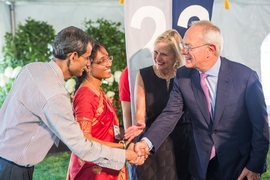 Caption:
Orientation leaders were on deck to welcome the Class of 2022.
Credits:
Photo: Jake Belcher

Caption:
The Class of 2022, their families, and friends gathered on Kresge Oval August 27 for the President’s Convocation.
Credits:
Photo: Jake Belcher

Caption:
President Reif reminded MIT freshmen, “You belong here…If you have doubts about yourself, it is just a sign that you are learning!”
Credits:
Photo: Jake Belcher

Caption:
Professors Cynthia Breazeal (Media Arts and Sciences) and Yoel Fink (EECS, Materials Science and Engineering) were among the faculty who addressed the Class of 2022, sharing their experiences as MIT students.
Credits:
Photo: Jake Belcher

Caption:
Professor Yoel Fink, CEO of Advanced Functional Fabrics of America, donned a tie specially made for the occasion by AFFOA, with communications systems built into the fabric.
Credits:
Photo: Jake Belcher

Caption:
Professor Collin Stultz of the Institute for Medical Engineering and Science welcomed the Class of 2022 into the MIT family.
Credits:
Photo: Jake Belcher

Caption:
The Chorallaries of MIT led the class in their first singing of the MIT School Song.
Credits:
Photo: Jake Belcher

On a sunny Monday morning on the oval lawn in front of Kresge Auditorium, MIT President L. Rafael Reif and the Institute’s top administrators and selected faculty delivered their annual Convocation to welcome the incoming first-year class of 2022.

Reif recalled some of his fears and concerns when he first arrived at MIT in 1980 as an assistant professor, including whether he would fit in, whether his accent would interfere with communications — and how he would cope with New England’s winters, after arriving from his native Venezuela, where winters were, as he described, “like this,” referring to the summery day with temperatures in the 80s.

“I knew almost no one, I was very far from home, and I was worried,” he said, in a story he described as being typical of many who arrive at MIT. “I was worried about fitting in on a campus more than 2,000 miles from my home.” But he concluded that “I’m here to tell you that all of my concerns, those anxious moments wondering if I had made the right decision, all of them were unfounded.”

Instead, he said, “I discovered a community of students, faculty, researchers, and staff that were a lot like me: They were curious, they asked questions, they were passionate, they liked to tinker. Most of them came from somewhere else. And they cared about helping each other and serving society.”

MIT is still that way, Reif said, in a way that’s deeply ingrained in its culture: “At MIT, I found my home.”

But it won’t always be easy, he told the incoming students. “Your classes will require equal parts of hard work, discipline, and dedication. You will enjoy great moments of success, but you may experience moments of doubt too,” he said. At those moments, he suggested, they should remember three things: “First, you belong here.” The selections overseen by Dean of Admissions Stuart Schmill, he said, show “a remarkable knack for finding the right students” for each year’s classes. In short, he said, “In Stu we trust.”

Second, he said, “all of us experience doubts about ourselves, even the distinguished professors you see on stage.” Those doubts often arise when pushing oneself or trying something new, he said. “If you have doubts about yourself, it’s just a sign that you are learning.”

And finally, he said, “you are surrounded by a community that cares about you. All of us are dedicated to your success, and we believe in you.”

Three faculty members spoke about their own experiences of MIT and of their initial feelings when they arrived here. Yoel Fink, a professor of materials science and engineering and director of the $300 million Advanced Functional Fabrics of America (AFFOA) institute, spoke of his time when he came to MIT as a graduate student, and couldn’t figure out where the Institute was after getting off the subway at Kendall Square. Growing up in Jerusalem, he was accustomed to schools and universities being surrounded by fences and guards, and was surprised to find the campus so open.

He came to realize that such openness was “an important aspect of MIT culture,” he said, and part of what makes it special: “openness, freedom, and with very few imposed boundaries.”

Fink recalled some humbling moments from his early days here, including when he scored a failing grade of 55 on one of his first midterm exams. After interviewing with dozens of professors, he still hadn’t come up with a research project after a year of trying, and his first manuscript was rejected by referees as being neither new nor interesting. And a professor offered him a table in her office because she said he was so shy and socially inept.

Then he described an early meeting after he had been given a thick book describing a research project that had just been funded by the U.S. Defense Advanced Research Projects Agency (DARPA). When he read the plan, he found that the solutions being proposed were “beautiful, but highly complex and certainly not very practical.” He thought of a much simpler approach, and was surprised that it wasn’t even mentioned in the report. As a student, he was at first reluctant to say anything about this, since the plan had been drawn up by highly respected, world-leading professors in their field. But at the end of the meeting, he decided to ask about this idea, and his question was greeted with a stunned silence.

In fact, the idea he was suggesting then turned out to form the basis for the discovery of a new type of mirror; then a paper in Nature; an invention that The New York Times described as “the perfect mirror”; his faculty position at MIT; much of his research since then; and the basis for a medical device that helped to cure 300,000 people — many of them with brain tumors. The idea also laid the groundwork for the creation of AFFOA, he said. “I owe my career to that chance moment and to asking that question,” he said. “MIT is the world’s best launchpad for ideas.”

Fink opened his comments by paying tribute to the recently deceased Sen. John McCain, citing his heroism and his long struggle with brain cancer — a struggle that is shared by Fink’s 14-year-old son and by a recent MIT student, he said.

Robotics researcher Cynthia Breazeal, an associate professor of media arts and sciences, described an event she helped to organize when she was a graduate student here. As part of a mini-Olympics during the January Independent Activities Period, she and her classmates decided to put on a tug-of-war, and to make it more interesting they decided to do it with a jello pit — and, being January, it all had to be indoors. She outlined the considerable research and labor needed to bring that about, including finding the supplies and making 500 gallons of non-edible green gelatin, and conducting the event without leaving any residue that would have to be cleaned up by others.

The story, she said, illustrated both MIT’s tolerance for wild and creative forms of play, and for MIT students’ willingness to work long and hard to achieve success in even their most frivolous undertakings. “Go out there and have some hard fun together,” she advised.

Collin Stultz, a professor of electrical engineering and computer science and head of MIT’s Institute for Medical Engineering and Science, said that there is one word that for him “really typifies the MIT experience … and that word is family — the MIT family.”

He said that, like a family, “we comfort each other in difficult times, we help each other when we struggle in the classroom or otherwise, and we collectively celebrate our accomplishments as students and faculty alike. Moreover, the distinction between faculty and students is a bit blurred here, more than in other institutions that I have been at in the past.” (Stultz is a graduate of Harvard University). “We all learn from one another, we grow with one another, and I hope that I have imparted to my students as much as they have imparted to me. … Welcome to the MIT family!”

“Every one of you has what it takes”