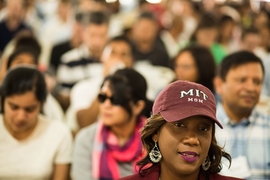 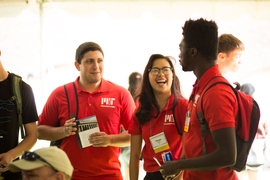 ↓ Download Image
Caption: Current MIT students staffed the event and greeted students of the Class of 2020 and their families.
Credits: Photo: Jake Belcher 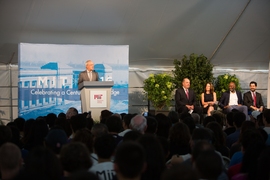 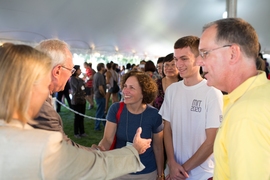 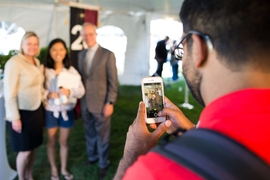 ↓ Download Image
Caption: A member of the Class of 2020 has her photo taken with President Reif and his wife, Christine.
Credits: Photo: Jake Belcher 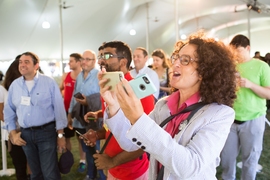 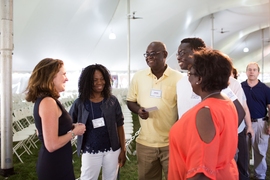 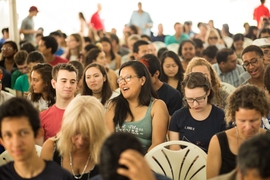 Caption:
President Reif and his wife, Christine, greeted new students and their families after the 2016 Freshman Convocation ceremony.

Caption:
A member of the Class of 2020 had her photo taken with President Reif and his wife, Christine.
Credits:
Photo: Jake Belcher

“I hope you will join us in facing the challenge of building a better MIT — and a better world,” MIT President L. Rafael Reif told the Class of 2020 at yesterday's Freshman Convocation, the annual welcoming ceremony for Institute’s incoming undergraduates.

President Reif joined three professors — who are also MIT alumni — in offering words of wisdom and encouragement to the new students, about finding personal and academic success during their time at the Institute.

Humanity, Reif said, is facing serious challenges in areas such as climate change, energy, disease, and poverty. “And MIT is a magnificent human machine for inventing the future. But MIT invents the future thanks to its students … which is why we are we are lucky to have you. And all of us together will make a better world,” Reif said.

The welcoming ceremony was held in a large tent in front of Kresge Auditorium and featured a performance of the song “In Praise of MIT” by the MIT Chorallaries, a student a cappella group. Reif personally greeted the new students and their families at the end of the convocation, and the students then proceeded to introductory luncheons at their residence halls. In March, the Institute admitted 1,485 students from 49 states and 65 countries to the Class of 2020.

Ed Boyden ’99, SM ’99, an associate professor of biological engineering and brain and cognitive sciences, and a member of MIT’s Media Lab and McGovern Institute for Brain Research, told the freshmen to look at MIT through two lenses: “One lens is about you, how you can use MIT to know yourself and figure out how you’re going to change the world. The other lens is about everybody else, how you can use MIT to fill your life with serendipity and unpredictable greatness.”

Addressing lens one, Boyden said MIT is a great place to experiment with “constructive failure,” where failing with certain concepts sets a student on a different but more valuable path. Experimenting with undergraduate research on quantum computers and topics “that didn’t fit into clean disciplinary boxes,” for instance, led Boyden to help pioneer optogenetics, a novel technique that allows scientists to stimulate or silence neurons with light. “I wouldn’t have gone down that path if I hadn’t treated MIT as a laboratory of constructive failure,” he said.

For lens two, Boyden related an anecdote about a serendipitous experience at MIT. As an undergraduate, he taught advanced quantum physics to freshmen, with a professor. Years later, a student who had joined the group of that professor on Boyden's recommendation, later joined Boyden’s research group as a postdoctoral scholar. Together, they co-developed a concept to physically swell biological specimens until they were big enough to visibly identify their molecular building blocks. Two other students later joined Boyden's group, and made the idea a reality. A few months ago, Boyden launched a startup based on that research. “MIT is an engine for creating serendipity,” he said.

Nergis Mavalvala PhD ’97, the Curtis and Kathleen Marble Professor of Astrophysics and the associate department head of the Department of Physics, who played a key role in this year’s discovery of gravitational waves using the Laser Interferometer Gravitational-wave Observatory (LIGO), spoke to students about the importance of problem sets — and embracing learning experiences beyond problem sets.

Mavalvala opened with the story about the origins of LIGO, invented at MIT by Rainer Weiss as a teaching exercise. In the 1960s, Weiss taught an MIT course on Einstein’s theory of general relativity, which included the concept of gravitational waves. To detect gravitational waves, he proposed a method to measure the time it takes light to travel between freely floating masses in space. A gravitational wave would change that time. Problem sets he designed for his students included the equations for those measurements, some of which would inspire Weiss to invent LIGO.

“All of you will do many, many problem sets,” Mavalvala said. Even though sometimes students will struggle through problem sets, “I want you to know that … you may be inventing a Nobel-prize-winning idea, so take your problem sets seriously,” she said to enthusiastic applause from the audience.

But, Mavalvala said, “there’s another piece to education, and that’s the arts and the humanities.” She told the freshmen to take classes they never thought of taking, such as poetry or music classes. “Go beyond problem sets,” she said. “One thing I ask of every one of the students is to do one thing at MIT you never planned to do.”

The event’s final speaker, Lawrence Sass SM ’94, PhD ’00, an associate professor of architecture, extended a challenge to the new students: “I challenge all of the freshmen to graduate with three cell numbers of your professors.”

Sass noted three good qualities to look for in faculty advisors: They explain and guide students through MIT’s sometimes complex academic system, they connect students with faculty members and others around campus that can help students succeed, and they offer honest and constructive feedback.

He also laid out three key methods for getting to know faculty: Take a small class with the faculty, participate in the Undergraduate Research Opportunities Program, and ask the faculty member out to coffee or lunch. “I strongly consider you to think about ways to get to know your professors,” he said. “I can guarantee that even if you … just get one cell phone number, that cell phone number will last you for a very long time.”

In closing, Sass told the freshmen that he welcomes the opportunity to get to know them personally, not just academically: “That’s probably, for me, the best part of being here: getting to know you outside of the classroom.”

“Every one of you has what it takes”

‘The world needs students with an MIT education’

‘This is my freshman year, too’