President Reif tells class of 2018, “I know that we are lucky to have you!”
David L. Chandler | MIT News Office
Publication Date:
Press Inquiries 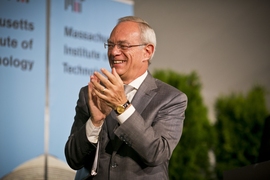 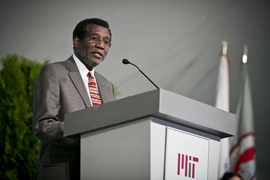 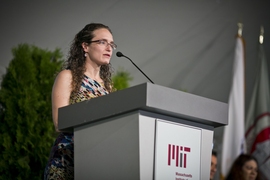 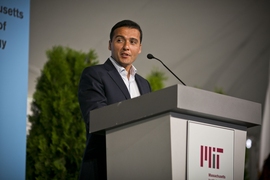 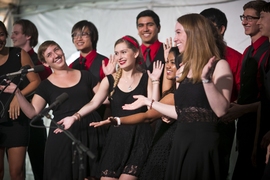 “You belong to an extremely select group,” MIT President L. Rafael Reif told the incoming Class of 2018 at this year’s Freshman Convocation, the traditional welcoming ceremony for the Institute’s new freshmen.

Pointing to the 7.9 percent acceptance rate for a group of applicants that is already heavily self-selected to represent the elite of graduating high school students, he told this “extremely strong and talented group” that although they undoubtedly had other options, “you all made an extremely smart choice” by coming to MIT. Recalling his own uncertainties when he first arrived here, he said he quickly realized “this community was like an extended family.”

The welcoming ceremony was held under sunny skies in a large tent in front of Kresge Auditorium and featured a performance of the song “In Praise of MIT” by the MIT Chorallaries, a student a cappella group. President Reif and his wife, Christine, personally greeted the new students and their families at the end of the convocation, and the students then proceeded to introductory luncheons at their residence halls.

Marcus Thompson, the Robert R. Taylor Professor of Music and a 41-year veteran on the MIT faculty, told the incoming class, “We take your education very personally, and learning goes on here in every place, at every time, 24/7.” He stressed that the students and teachers are all learners here: “As faculty, we learn more, with greater certainty, as we teach you. There are many things that we will learn together, side by side.”

Rebecca Saxe, an associate professor of brain and cognitive science, described how she does research on the ways the human brain works, often by making use of “typical human adults: MIT undergraduates” for her studies.

When she was an undergraduate, Saxe said, “I certainly couldn’t imagine being here today” as a member of the faculty. Now, looking out over the crowd of new students and their families, she asked: “Where could there be a more interesting, stronger collection of human brains?”

Paulo Lozano, an associate professor of aeronautics and astronautics, described how, after his undergraduate studies in his home country of Mexico, when he contemplated going to MIT for graduate work, he expected to find a different country and culture. “When I arrived to register,” he said, he realized: “I was not in another country, I was arriving at another planet. And what a peculiar planet it is!”

Lozano urged the students to “look for the truth as explorers, and invent the future,” whether it’s by discovering cures for diseases or ways to purify water, or by writing better computer programs. Describing his own research and that of his students on finding new propulsion systems for sending satellites deep into space, he said: “There are more stories like this around every corner.”

And he urged the students not to be afraid to accost their teachers and get to know them, despite the tendency to feel intimidated in the face of faculty members who “wrote some of the books you will read, and have equations named after them.” It’s simply not true, he said, that professors are surrounded by “an invisible force field that repels students.”

On the contrary, he said, “We are all in this together, and the world is challenging us. Welcome to your new planet!”

Reif sounded a similar note, urging the new freshmen: “Have confidence in yourself. ... We admitted you because each of you has what it takes” to achieve success. As the Class of 2018 looks forward to the “extremely rich environment MIT offers,” he said, their experience here won’t always be easy, “but it will be transformational.”

‘The world needs students with an MIT education’

‘This is my freshman year, too’