Study identifies neurons that fire at the beginning and end of a behavior as it becomes a habit.
Anne Trafton | MIT News Office
Publication Date:
Press Inquiries 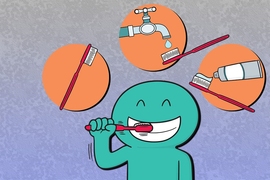 ↓ Download Image
Caption: Our daily lives include hundreds of routine habits, made up of many smaller actions, such as picking up our toothbrush, squeezing toothpaste onto it, and then lifting the brush to our mouth. This process of grouping behaviors together into a single routine is known as “chunking.” MIT neuroscientists have now found that certain neurons in the brain are responsible for marking the beginning and end of these chunked units of behavior.

Caption:
Our daily lives include hundreds of routine habits, made up of many smaller actions, such as picking up our toothbrush, squeezing toothpaste onto it, and then lifting the brush to our mouth. This process of grouping behaviors together into a single routine is known as “chunking.” MIT neuroscientists have now found that certain neurons in the brain are responsible for marking the beginning and end of these chunked units of behavior.

Our daily lives include hundreds of routine habits. Brushing our teeth, driving to work, or putting away the dishes are just a few of the tasks that our brains have automated to the point that we hardly need to think about them.

Although we may think of each of these routines as a single task, they are usually made up of many smaller actions, such as picking up our toothbrush, squeezing toothpaste onto it, and then lifting the brush to our mouth. This process of grouping behaviors together into a single routine is known as “chunking,” but little is known about how the brain groups these behaviors together.

MIT neuroscientists have now found that certain neurons in the brain are responsible for marking the beginning and end of these chunked units of behavior. These neurons, located in a brain region highly involved in habit formation, fire at the outset of a learned routine, go quiet while it is carried out, then fire again once the routine has ended.

This task-bracketing appears to be important for initiating a routine and then notifying the brain once it is complete, says Ann Graybiel, an Institute Professor at MIT, a member of the McGovern Institute for Brain Research, and the senior author of the study.

Graybiel has previously shown that a part of the brain called the striatum, which is found in the basal ganglia, plays a major role in habit formation. Several years ago, she and her group found that neuron firing patterns in the striatum change as animals learn a new habit, such as turning to the right or left in a maze upon hearing a certain tone.

When the animal is just starting to learn the maze, these neurons fire continuously throughout the task. However, as the animal becomes better at making the correct turn to receive a reward, the firing becomes clustered at the very beginning of the task and at the very end. Once these patterns form, it becomes extremely difficult to break the habit.

However, these previous studies did not rule out other explanations for the pattern, including the possibility that it might be related to the motor commands required for the maze-running behavior. In the new study, Martiros and Graybiel set out to determine whether this firing pattern could be conclusively linked with the chunking of habitual behavior.

The researchers trained rats to press two levers in a particular sequence, for example, 1-2-2 or 2-1-2. The rats had to figure out what the correct sequence was, and if they did, they received a chocolate milk reward. It took several weeks for them to learn the task, and as they became more accurate, the researchers saw the same beginning-and-end firing patterns develop in the striatum that they had seen in their previous habit studies.

Because each rat learned a different sequence, the researchers could rule out the possibility that the patterns correspond to the motor input required to preform a particular series of movements. This offers strong evidence that the firing pattern corresponds specifically to the initiation and termination of a learned routine, the researchers say.

“I think this more or less proves that the development of bracketing patterns serves to package up a behavior that the brain — and the animals — consider valuable and worth keeping in their repertoire. It really is a high-level signal that helps to release that habit, and we think the end signal says the routine has been done,” Graybiel says.

The researchers also discovered a distinct pattern in a set of inhibitory neurons in the striatum. Activity in these neurons, known as interneurons, displayed a strong inverse relationship with the activity of the excitatory neurons that produce the bracketing pattern.

“The interneurons were activated during the time when the rats were in the middle of performing the learned sequence, and could possibly be preventing the principal neurons from initiating another routine until the current one was finished. The discovery of this opposite activity by the interneurons also gets us one step closer to understanding how brain circuits can actually produce this pattern of activity,” Martiros says.

Graybiel’s lab is now investigating further how the interaction between these two groups of neurons helps to encode habitual behavior in the striatum.

How the brain controls our habits