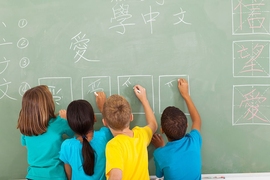 A great deal of evidence suggests that it is more difficult to learn a new language as an adult than as a child, which has led scientists to propose that there is a “critical period” for language learning. However, the length of this period and its underlying causes remain unknown.

A new study performed at MIT suggests that children remain very skilled at learning the grammar of a new language much longer than expected — up to the age of 17 or 18. However, the study also found that it is nearly impossible for people to achieve proficiency similar to that of a native speaker unless they start learning a language by the age of 10.

“If you want to have native-like knowledge of English grammar you should start by about 10 years old. We don’t see very much difference between people who start at birth and people who start at 10, but we start seeing a decline after that,” says Joshua Hartshorne, an assistant professor of psychology at Boston College, who conducted this study as a postdoc at MIT.

People who start learning a language between 10 and 18 will still learn quickly, but since they have a shorter window before their learning ability declines, they do not achieve the proficiency of native speakers, the researchers found. The findings are based on an analysis of a grammar quiz taken by nearly 670,000 people, which is by far the largest dataset that anyone has assembled for a study of language-learning ability.

“It’s been very difficult until now to get all the data you would need to answer this question of how long the critical period lasts,” says Josh Tenenbaum, an MIT professor of brain and cognitive sciences and an author of the paper. “This is one of those rare opportunities in science where we could work on a question that is very old, that many smart people have thought about and written about, and take a new perspective and see something that maybe other people haven’t.”

Steven Pinker, a professor of psychology at Harvard University, is also an author of the paper, which appears in the journal Cognition on May 1.

While it’s typical for children to pick up languages more easily than adults — a phenomenon often seen in families that immigrate to a new country — this trend has been difficult to study in a laboratory setting. Researchers who brought adults and children into a lab, taught them some new elements of language, and then tested them, found that adults were actually better at learning under those conditions. Such studies likely do not accurately replicate the process of long-term learning, Hartshorne says.

“Whatever it is that results in what we see in day-to-day life with adults having difficulty in fully acquiring the language, it happens over a really long timescale,” he says.

Following people as they learn a language over many years is difficult and time-consuming, so the researchers came up with a different approach. They decided to take snapshots of hundreds of thousands of people who were in different stages of learning English. By measuring the grammatical ability of many people of different ages, who started learning English at different points in their life, they could get enough data to come to some meaningful conclusions.

Hartshorne’s original estimate was that they needed at least half a million participants — unprecedented for this type of study. Faced with the challenge of attracting so many test subjects, he set out to create a grammar quiz that would be entertaining enough to go viral.

With the help of some MIT undergraduates, Hartshorne scoured scientific papers on language learning to discover the grammatical rules most likely to trip up a non-native speaker. He wrote questions that would reveal these errors, such as determining whether a sentence such as “Yesterday John wanted to won the race” is grammatically correct.

To entice more people to take the test, he also included questions that were not necessary for measuring language learning, but were designed to reveal which dialect of English the test-taker speaks. For example, an English speaker from Canada might find the sentence “I’m done dinner” correct, while most others would not.

Within hours after being posted on Facebook, the 10-minute quiz “Which English?” had gone viral.

“The next few weeks were spent keeping the website running, because the amount of traffic we were getting was just overwhelming,” Hartshorne says. “That’s how I knew the experiment was sufficiently fun.”

After taking the quiz, users were asked to reveal their current age and the age at which they began learning English, as well as other information about their language background. The researchers ended up with complete data for 669,498 people, and once they had this huge amount of data, they had to figure out how to analyze it.

“We had to tease apart how many years has someone been studying this language, when they started speaking it, and what kind of exposure have they been getting: Were they learning in a class or were they immigrants to an English-speaking country?” Hartshorne says.

The researchers developed and tested a variety of computational models to see which was most consistent with their results, and found that the best explanation for their data is that grammar-learning ability remains strong until age 17 or 18, at which point it drops. The findings suggest that the critical period for learning language is much longer than cognitive scientists had previously thought.

The authors note that adults are still good at learning foreign languages, but they will not be able to reach the level of a native speaker if they begin learning as a teenager or as an adult.

"Although it has long been observed that learning a second language is easier early in life, this study provides the most compelling evidence to date that there is a specific time in life after which the ability to learn the grammar of a new language declines," says Mahesh Srinivasan, an assistant professor of psychology at the University of California at Berkeley, who was not involved in the study. “This is a major step forward for the field. The study also opens surprising, new questions, because it suggests that the critical period closes much later than previously thought."

Still unknown is what causes the critical period to end around age 18. The researchers suggest that cultural factors may play a role, but there may also be changes in brain plasticity that occur around that age.

“It’s possible that there’s a biological change. It’s also possible that it’s something social or cultural,” Tenenbaum says. “There’s roughly a period of being a minor that goes up to about age 17 or 18 in many societies. After that, you leave your home, maybe you work full time, or you become a specialized university student. All of those might impact your learning rate for any language.”

Hartshorne now plans to run some related studies in his lab at Boston College, including one that will compare native and non-native speakers of Spanish. He also plans to study whether individual aspects of grammar have different critical periods, and whether other elements of language skill such as accent have a shorter critical period.

The researchers also hope that other scientists will make use of their data, which they have posted online, for additional studies.

“There are lots of other things going on in this data that somebody could analyze,” Hartshorne says. “We do want to draw other scientists’ attention to the fact that the data is out there and they can use it.”

The research was funded by the National Institutes of Health and MIT’s Center for Minds, Brains, and Machines.

Bucking conventional wisdom, research co-authored by Prof. Josh Tenenbaum shows that “picking up the subtleties of grammar in a a second language does not fade until well into the teens,” writes Dana G. Smith for Scientific American. “To become completely fluent, however, learning should start before the age of 10.”

New research suggests “children are highly skilled at learning the grammar of a new language up until the age of 17 or 18, much longer than previously thought,” reports Kashmira Gander in Newsweek. “We may need to go back to the drawing board in trying to explain why adults have trouble learning language,” Joshua Hartshorne, who co-wrote the study as a postdoc at MIT, tells Gander.

A study co-authored by Prof. Josh Tenenbaum finds that learning a new language should start before age 10 to achieve a native-like grasp of the grammar, reports BBC News. People remain highly skilled language learners until about 17 or 18, but then fall off, which Tenenbaum says could be due to “a biological change” or “something social or cultural.”

The rise and fall of cognitive skills