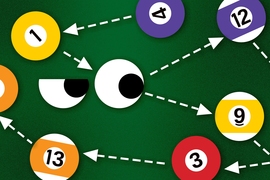 ↓ Download Image
Caption: “What’s really cool about eye tracking is it lets you see things that you’re not consciously aware of,” Professor Josh Tenenbaum says. “When psychologists and philosophers have proposed the idea of counterfactual simulation, they haven’t necessarily meant that you do this consciously. It’s something going on behind the surface, and eye tracking is able to reveal that.”

Caption:
“What’s really cool about eye tracking is it lets you see things that you’re not consciously aware of,” Professor Josh Tenenbaum says. “When psychologists and philosophers have proposed the idea of counterfactual simulation, they haven’t necessarily meant that you do this consciously. It’s something going on behind the surface, and eye tracking is able to reveal that.”

How do people assign a cause to events they witness? Some philosophers have suggested that people determine responsibility for a particular outcome by imagining what would have happened if a suspected cause had not intervened.

This kind of reasoning, known as counterfactual simulation, is believed to occur in many situations. For example, soccer referees deciding whether a player should be credited with an “own goal” — a goal accidentally scored for the opposing team — must try to determine what would have happened had the player not touched the ball.

This process can be conscious, as in the soccer example, or unconscious, so that we are not even aware we are doing it. Using technology that tracks eye movements, cognitive scientists at MIT have now obtained the first direct evidence that people unconsciously use counterfactual simulation to imagine how a situation could have played out differently.

“This is the first time that we or anybody have been able to see those simulations happening online, to count how many a person is making, and show the correlation between those simulations and their judgments,” says Josh Tenenbaum, a professor in MIT’s Department of Brain and Cognitive Sciences, a member of MIT’s Computer Science and Artificial Intelligence Laboratory, and the senior author of the new study.

Tobias Gerstenberg, a postdoc at MIT who will be joining Stanford’s Psychology Department as an assistant professor next year, is the lead author of the paper, which appears in the Oct. 17 issue of Psychological Science. Other authors of the paper are MIT postdoc Matthew Peterson, Stanford University Associate Professor Noah Goodman, and University College London Professor David Lagnado.

Until now, studies of counterfactual simulation could only use reports from people describing how they made judgments about responsibility, which offered only indirect evidence of how their minds were working.

Gerstenberg, Tenenbaum, and their colleagues set out to find more direct evidence by tracking people’s eye movements as they watched two billiard balls collide. The researchers created 18 videos showing different possible outcomes of the collisions. In some cases, the collision knocked one of the balls through a gate; in others, it prevented the ball from doing so.

Before watching the videos, some participants were told that they would be asked to rate how strongly they agreed with statements related to ball A’s effect on ball B, such as, “Ball A caused ball B to go through the gate.” Other participants were asked simply what the outcome of the collision was.

As the subjects watched the videos, the researchers were able to track their eye movements using an infrared light that reflects off the pupil and reveals where the eye is looking. This allowed the researchers, for the first time, to gain a window into how the mind imagines possible outcomes that did not occur.

“What’s really cool about eye tracking is it lets you see things that you’re not consciously aware of,” Tenenbaum says. “When psychologists and philosophers have proposed the idea of counterfactual simulation, they haven’t necessarily meant that you do this consciously. It’s something going on behind the surface, and eye tracking is able to reveal that.”

The researchers found that when participants were asked questions about ball A’s effect on the path of ball B, their eyes followed the course that ball B would have taken had ball A not interfered. Furthermore, the more uncertainty there was as to whether ball A had an effect on the outcome, the more often participants looked toward ball B’s imaginary trajectory.

“It’s in the close cases where you see the most counterfactual looks. They’re using those looks to resolve the uncertainty,” Tenenbaum says.

Participants who were asked only what the actual outcome had been did not perform the same eye movements along ball B’s alternative pathway.

“The idea that causality is based on counterfactual thinking is an idea that has been around for a long time, but direct evidence is largely lacking,” says Phillip Wolff, an associate professor of psychology at Emory University, who was not involved in the research. “This study offers more direct evidence for that view.”

In this video, two participants' eye-movements are tracked while they watch a video clip. The blue dot indicates where each participant is looking on the screen. The participant on the left was asked to judge whether they thought that ball B went through the middle of the gate. Participants asked this question mostly looked at the balls and tried to predict where ball B would go. The participant on the right was asked to judge whether ball A caused ball B to go through the gate. Participants asked this question tried to simulate where ball B would have gone if ball A hadn't been present in the scene. (Image: Tobias Gerstenberg)

The researchers are now using this approach to study more complex situations in which people use counterfactual simulation to make judgments of causality.

One example the researchers are studying is the following: Imagine ball C is headed for the gate, while balls A and B each head toward C. Either one could knock C off course, but A gets there first. Is B off the hook, or should it still bear some responsibility for the outcome?

“Part of what we are trying to do with this work is get a little bit more clarity on how people deal with these complex cases. In an ideal world, the work we’re doing can inform the notions of causality that are used in the law,” Gerstenberg says. “There is quite a bit of interaction between computer science, psychology, and legal science. We’re all in the same game of trying to understand how people think about causation.”

The research was funded by the National Science Foundation through MIT’s Center for Brains, Minds and Machines, and by the Office of Naval Research.