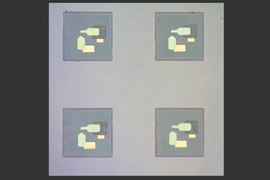 ↓ Download Image
Caption: Optical images show circuits made by the research team, attached to particles just a few hundred nanometers across.
Credits: Courtesy of the researchers 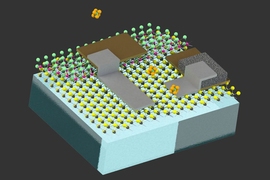 ↓ Download Image
Caption: Diagram illustrates the design of the tiny devices, which are designed to be able to float freely in liquid or air.
Credits: Courtesy of the researchers

Caption:
This diagram illustrates the design of the tiny devices, which are designed to be able to float freely in liquid or air.
Credits:
Courtesy of the researchers

Caption:
Optical images show circuits made by the research team, attached to particles just a few hundred nanometers across.
Credits:
Courtesy of the researchers

Researchers at MIT have created what may be the smallest robots yet that can sense their environment, store data, and even carry out computational tasks. These devices, which are about the size of a human egg cell, consist of tiny electronic circuits made of two-dimensional materials, piggybacking on minuscule particles called colloids.

Colloids, which insoluble particles or molecules anywhere from a billionth to a millionth of a meter across, are so small they can stay suspended indefinitely in a liquid or even in air. By coupling these tiny objects to complex circuitry, the researchers hope to lay the groundwork for devices that could be dispersed to carry out diagnostic journeys through anything from the human digestive system to oil and gas pipelines, or perhaps to waft through air to measure compounds inside a chemical processor or refinery.

“We wanted to figure out methods to graft complete, intact electronic circuits onto colloidal particles,” explains Michael Strano, the Carbon C. Dubbs Professor of Chemical Engineering at MIT and senior author of the study, which was published today in the journal Nature Nanotechnology. MIT postdoc Volodymyr Koman is the paper’s lead author.

“Colloids can access environments and travel in ways that other materials can’t,” Strano says. Dust particles, for example, can float indefinitely in the air because they are small enough that the random motions imparted by colliding air molecules are stronger than the pull of gravity. Similarly, colloids suspended in liquid will never settle out.

Researchers produced tiny electronic circuits, just 100 micrometers across,on a substrate material which was then dissolved away to leave the individual devices floating freely in solution. (Courtesy of the researchers)

Strano says that while other groups have worked on the creation of similarly tiny robotic devices, their emphasis has been on developing ways to control movement, for example by replicating the tail-like flagellae that some microbial organisms use to propel themselves. But Strano suggests that may not be the most fruitful approach, since flagellae and other cellular movement systems are primarily used for local-scale positioning, rather than for significant movement. For most purposes, making such devices more functional is more important than making them mobile, he says.

Tiny robots made by the MIT team are self-powered, requiring no external power source or even internal batteries. A simple photodiode provides the trickle of electricity that the tiny robots’ circuits require to power their computation and memory circuits. That’s enough to let them sense information about their environment, store those data in their memory, and then later have the data read out after accomplishing their mission.

The microscopic devices, combining electronic circuits with colloid particles, are aerosolized inside a chamber and then a substance to be analyzed is introduced, where it can interact with the devices. These devices are then collected on microscope slides on a surface so they can be tested. (Courtesy of the researchers)

Such devices could ultimately be a boon for the oil and gas industry, Strano says. Currently, the main way of checking for leaks or other issues in pipelines is to have a crew physically drive along the pipe and inspect it with expensive instruments. In principle, the new devices could be inserted into one end of the pipeline, carried along with the flow, and then removed at the other end, providing a record of the conditions they encountered along the way, including the presence of contaminants that could indicate the location of problem areas. The initial proof-of-concept devices didn’t have a timing circuit that would indicate the location of particular data readings, but adding that is part of ongoing work.

Similarly, such particles could potentially be used for diagnostic purposes in the body, for example to pass through the digestive tract searching for signs of inflammation or other disease indicators, the researchers say.

Most conventional microchips, such as silicon-based or CMOS, have a flat, rigid substrate and would not perform properly when attached to colloids that can experience complex mechanical stresses while travelling through the environment. In addition, all such chips are “very energy-thirsty,” Strano says. That’s why Koman decided to try out two-dimensional electronic materials, including graphene and transition-metal dichalcogenides, which he found could be attached to colloid surfaces, remaining operational even after after being launched into air or water. And such thin-film electronics require only tiny amounts of energy. “They can be powered by nanowatts with subvolt voltages,” Koman says.

As a demonstration of how such particles might be used to test biological samples, the team placed a solution containing the devices on a leaf, and then used the devices’ internal reflectors to locate them for testing by shining a laser at the leaf. (Courtesy of the researchers)

Why not just use the 2-D electronics alone? Without some substrate to carry them, these tiny materials are too fragile to hold together and function. “They can’t exist without a substrate,” Strano says. “We need to graft them to the particles to give them mechanical rigidity and to make them large enough to get entrained in the flow.”

But the 2-D materials “are strong enough, robust enough to maintain their functionality even on unconventional substrates” such as the colloids, Koman says.

The nanodevices they produced with this method are autonomous particles that contain electronics for power generation, computation, logic, and memory storage. They are powered by light and contain tiny retroreflectors that allow them to be easily located after their travels. They can then be interrogated through probes to deliver their data. In ongoing work, the team hopes to add communications capabilities to allow the particles to deliver their data without the need for physical contact.

Other efforts at nanoscale robotics “haven’t reached that level” of creating complex electronics that are sufficiently small and energy efficient to be aerosolized or suspended in a colloidal liquid. These are “very smart particles, by current standards,” Strano says, adding, “We see this paper as the introduction of a new field” in robotics.

Xinhua news wire reports that MIT researchers have developed a tiny new robot, the size of a human egg cell, that could be used to detect medical problems or to identify oil or gas leaks. “The self-powered cell-size robots don't need any external power source or even internal batteries,” explains Xinhua.

TechCrunch reporter Brian Heater writes that MIT researchers have developed self-powered robots the size of human cells that can float indefinitely in liquid or the air. Heater explains that the robots could be used to monitor hard to reach environments, such as pipelines or the human body.

MIT researchers have designed new robots the size of a human egg cell that can sense their surroundings, writes Brooks Hays for UPI. These nanoscale robots could one day be used to develop less invasive colonoscopies or aid in the search for structural vulnerabilities inside oil and gas pipelines, explains Hays.