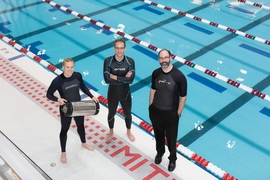 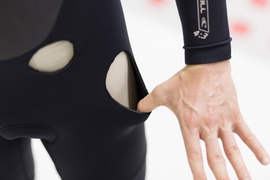 ↓ Download Image
Caption: Holes in a wetsuit reveal the thickness of the neoprene material. The new MIT-developed treatment could provide the same amount of insulation with just half the thickness, the researchers say.
Credits: Photo: Susan Young

Caption:
Holes in a wetsuit reveal the thickness of the neoprene material. The new MIT-developed treatment could provide the same amount of insulation with just half the thickness, the researchers say.
Credits:
Photo: Susan Young

When Navy SEALs carry out dives in Arctic waters, or when rescue teams are diving under ice-covered rivers or ponds, the survival time even in the best wetsuits is very limited — as little as tens of minutes, and the experience can be extremely painful at best. Finding ways of extending that survival time without hampering mobility has been a priority for the U.S. Navy and research divers, as a pair of MIT engineering professors learned during a recent program that took them to a variety of naval facilities.

That visit led to a two-year collaboration that has now yielded a dramatic result: a simple treatment that can improve the survival time for a conventional wetsuit by a factor of three, the scientists say.

The findings, which could be applied essentially immediately, are reported this week in the journal RSC Advances, in a paper by Michael Strano, the Carbon P. Dubbs Professor of Chemical Engineering; Jacopo Buongiorno, the TEPCO Professor and associate head of the Department of Nuclear Science and Engineering; and five others at MIT and George Mason University.

The process they discovered works by simply placing the standard neoprene wetsuit inside a pressure tank autoclave no bigger than a beer keg, filled with a heavy inert gas, for about a day. The treatment then lasts for about 20 hours, far longer than anyone would spend on a dive, explains Buongiorno, who is an avid wetsuit user himself. (He competed in a triathlon just last week.) The process could also be done in advance, with the wetsuit placed in a sealed bag to be opened just before use, he says.

Though Buongiorno and Strano are both on the MIT faculty, they had never met until they were both part of the Defense Science Study Group for the Department of Defense. “We got to visit a lot of bases, and met with all kinds of military people up to four-star generals,” says Buongiorno, whose specialty in nuclear engineering has to do with heat transfer, especially through water. They learned about the military’s particular needs and were asked to design a technological project to address one of those needs. After meeting with a group of Navy SEALs, the elite special-operations diving corps, they decided the need for longer-lasting protection in icy waters was one that they could take on.

They looked at the different strategies that various animals use to survive in these frigid waters, and found three types: air pockets trapped in fur or feathers, as with otters and penguins; internally generated heat, as with some animals and fish (including great white sharks, which, surprisingly, are warm-blooded); or a layer of insulating material that greatly slows heat loss from the body, as with seals’ and whales’ blubber.

In the end, after simulations and lab tests, they ended up with a combination of two of these — a blubber-like insulating material that also makes use of trapped pockets of gas, although in this case the gas is not air but a heavy inert gas, namely xenon or krypton.

The material that has become standard for wetsuits is neoprene, an inexpensive material that is a mix of synthetic rubber materials processed into a kind of foam, producing a closed-cell structure similar to styrofoam. Trapped within that structure, occupying more than two-thirds of the volume and accounting for half of the heat that gets transferred through it, are pockets of air.

Strano and Buongiorno found that if the trapped air is replaced with xenon or krypton, the material’s insulating properties increase dramatically. The result, they say, is a material with the lowest heat transfer of any wetsuit ever made. “We set a world record for the world’s lowest thermal conductivity garment,” Strano says — conductivity almost as low as air itself. “It’s like wearing a coat of air.”

They found this could improve survivability in water colder than 10 degrees Celsius, raising it from less than one hour to two or three hours.

The result could be a boon not just to those in the most extreme environments, but to anyone who uses wetsuits in cold waters, including swimmers, athletes, and surfers, as well as professional divers of all kinds.

“As part of this project, I interviewed dozens of wetsuit users, including a professional underwater photographer, divers working at the New England Aquarium, a Navy SEAL friend of mine, and random surfers I approached on a San Diego beach,” says co-author and former MIT postdoc Jeffrey Moran PhD ’17, who is now an assistant professor at George Mason University. “The feedback was essentially unanimous — there is an urgent need for warmer wetsuits, both in and out of the Arctic. People's eyes lit up when I told them about our results.”

Currently, the only viable cold-water alternatives to wetsuits are dry suits, which have a layer of air between the suit and the skin that must be maintained using a hose and a pump, or a warm-water suit, which similarly requires a hose and pump connection. In either case, a failure of the pump or a cut or tear in the suit can result is a quick loss of insulation that can be life threatening within minutes.

But the xenon- or krypton-infused neoprene requires no such support system and has no way of quickly losing its insulating properties, and so does not carry that risk. “We can take anyone’s neoprene wetsuit and pressurize it with xenon or krypton for high-performance operations,” Strano says. MIT graduate student Anton Cottrill, a co-author of the paper, adds, “The gas actually infuses more quickly during treatment than it discharges during its use in an aquatic environment.”

Another possibility, they say, is to produce a wetsuit with the same insulating properties as present ones, but with a small fraction of the thickness, allowing more comfort and freedom of movement that might be appealing to athletes. “Almost everyone I interviewed also said they wanted a wetsuit that was easier to move around in and to put on and take off,” says Moran. “The results of this project suggest that we could make wetsuits that provide the same thermal insulation as traditional ones, but are about half as thick.”

One next step in their research is to look at ways of making a long-term, stable version of a xenon-infused neoprene, perhaps by bonding a protective layer over it, they say. In the meantime, the team is also looking for opportunities to treat the neoprene garments of interested users so that they can collect performance data.

“Their approach to the problem is a remarkable feat of materials science and also very clever engineering,” says John Dabiri, a professor of civil and environmental engineering and of mechanical engineering at Stanford University, who was not involved in this work. “They’ve managed to achieve something close to an ideal air-like thermal barrier, and they’ve accomplished this using materials that are more compatible with end-uses like scuba diving than previous concepts. The overall performance characteristics could be a game-changer for a variety of applications.”

And Charles Amsler, a professor of biology at the University of Alabama at Birmingham, who has made almost 950 research dives in Antartica but was not connected with this research, says, “It could be very beneficial in cases where flexibility, lack of bulkiness, swimming speed, or reduced drag with diver propulsion vehicles are at a premium, or where environmental hazards make the chance of dive suit puncture high. Normally, diver thermal protection in very cold water is by use of dry suits rather than wetsuits. But wetsuits typically allow much more diver flexibility.”

Amsler adds that “One concern with drysuits is that … should the suit be badly punctured, a diver loses much or all of that insulation. … In a deep or long duration dive where staged decompression would be required to prevent decompression illness (“the bends”), wearing one of these thermally enhanced wetsuits would significantly reduce the chance that a diver with a punctured suit would have to make the choice between potentially fatal hypothermia and potentially debilitating or fatal decompression illness.”

Jacopo Buongiorno: Bringing outside knowledge to the nuclear industry