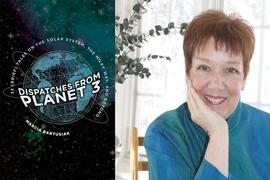 Caption:
Marcia Bartusiak and her new book, “Dispatches from Planet 3”

Here’s quick rule of thumb about the universe: Everything old is new again.

Those materials being used when new stars or planets form are just recycled cosmic matter, after all. But also, even our latest scientific discoveries may not be as new as they seem.

That’s one insight from Marcia Bartusiak’s new book, “Dispatches from Planet 3,” published by Yale University Press, a tour of major discoveries in astronomy and astrophysics that digs into the history behind these breakthroughs.

“No discovery comes out of the blue,” says Bartusiak, professor of the practice in MIT’s Graduate Program in Science Writing. “Sometimes it takes decades of preparation for [discoveries] to be built, one brick at a time.”

The book, drawn from her columns in Natural History, underscores that point by highlighting unheralded scientists whose work influenced later discoveries.

Moreover, as Bartusiak observes in the book, recent scientific debates often echo older arguments. Take the kerfuffle last decade about whether or not Pluto should be regarded as a proper planet in our solar system. As Bartusiak recounts in the book, the same thing happened multiple times in the 19th century, when objects called Ceres, Vesta, and Juno first gained and then lost membership in the club of planets.

“Ceres in the 19th century was a certified planet, along with Vesta and Juno, the big asteroids, until they got demoted into the general asteroid belt,” Bartusiak says. “Then the same thing happened again, and everyone said, ‘Poor Pluto, it’s not a planet any more.’ Well, I’m sure in the 19th century there were people going ‘Poor Ceres, it’s not a planet.’ We’ll get over it.”

(Demoting Pluto, by the way, is a judgment Bartusiak is comfortable with: “They made the right decision. Pluto is a dwarf planet. It’s part of the Kuiper Belt. I’m sure I’ll get a lot of people mad with me, [but] it makes sense to have Pluto in that group, rather than … with the big terrestrial planets and the gas giants.”)

One astronomer who made a crucial Pluto-related discovery was Jane X. Luu, who helped locate asteroids orbiting the sun from even farther away. Luu is just one of many women in “Dispatches from Planet 3” — although, Bartusiak says, that was not by design, but simply a consequence of hunting for the origins of important advances.

“I did not have an agenda for this book,” Bartusiak says. “I have always been the type of writer that wanted to follow my nose on what the most interesting findings, discoveries, and theories were, without worrying about who was doing them.”

But as it happens, many stories about the development of scientific knowledge involve accomplished female scientists who did not immediately become household names.

Consider the astronomer Cecilia Payne-Gaposchkin, who in the 1920s, Bartusiak notes, “first knew that hydrogen is the major element of the universe. A major discovery! This is the fuel for stars. It was central to astronomical studies. And yet, the greatest astronomer of the time, Henry Norris Russell, made her take [the idea] out of her thesis before they would accept it at Harvard.”

Bartusiak’s book also recounts the career of Beatrice Tinsley, an astrophysicist who in the 1970s developed important work about the ways galaxies change over time, before she died in her early 40s.

“Who really started thinking about galaxy evolution?” Bartusiak asks. “Beatrice Tinsley, ignored when she first started doing this, [produced] one of the most accomplished PhD theses in astronomical history. She was the first to really take it seriously.”

The notion that galaxies evolve, Bartusiak’s book reminds us, is a relatively recent concept, running counter to ages of conventional wisdom.

“People thought of the universe as being serene [and that] every galaxy was like the Milky Way,” Bartusiak says. “And that was based on what they could see.” Deep in the postwar era, our empirical knowledge expanded, and so did our conception of galactic-scale activity.

In fairness, the Milky Way is pretty placid at the moment.

“It will get active again when we collide with Andromeda, 4 billion years from now,” Bartusiak says. “We’re lucky we’re not in the galactic center or in a very active star cluster. You have stars blowing up, and it probably would be hard for life to start if you were in an area where X-rays were raining down on you, or if a supernova was going off nearby. We’re off in a little spur in a very quiet part of the Milky Way galaxy, which has enabled life on Earth here to evolve and flourish without a cosmic incident raining havoc down upon us.”

Bartusiak closes the book with chapters on black holes, the idea of the multiverse, and our problems in conceptualizing what it means to think that the universe had a beginning.

“We think that black holes and gravitational waves are strange, but there may stranger things to come,” Barytusiak says. “As I say in a chapter with [Harvard theoretical physicist] Lisa Randall, experimenters and theorists used to work in tandem … and now the theorists have moved so far from observations that it’s a little frightening. There’s a need for new instrumentation, the new James Webb telescopes, the new particle accelerators.”

Which ultimately brings Bartusiak to another part of science that definitely has precedent: the need for funding to support research.

“The bigger the instrument, the further out you can see, or the further down into spacetime you can see, so I want people to realize that if you want these stories to continue, you’re going to need a further investment,” Bartusiak says. “But that’s what makes us a civilization. That we can take at least some of our wealth and use it to expand our knowledge about where we live. And that includes the universe, not just the Earth.”

Prof. Marcia Bartusiak speaks with Radio Boston’s Evan Horowitz about her book, “Dispatches from Planet 3.” Bartusiak explains that she was inspired to “take a new exciting finding and provide the backstory. All of these essays are taking something new - a new idea, a new discovery - and showing that it had an origin or a seed in the past.”

3 Questions: Marcia Bartusiak on black holes and the history of science

Bartusiak awarded Davis Prize by the History of Science Society