3 Questions: Marcia Bartusiak on black holes and the history of science 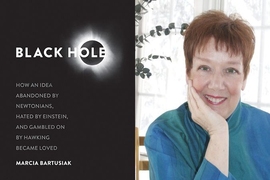 This year marks the 100th anniversary of Albert Einstein’s theory of general relativity — which, among other things, helped lead to the discovery of black holes, those mysterious, spacetime-bending collapsed stars. Now Marcia Bartusiak, a professor of the practice in MIT’s Graduate Science Writing Program, has a new book out, “Black Hole,” published today by Yale University Press, which details the history of the discovery of black holes. As Bartusiak recounts, the idea of black holes not only stemmed from general relativity; it also helped reinvigorate general relativity within the field of physics. Bartusiak recently talked to MIT News about her new book.

Q. It is striking that while black holes are a 20th-century scientific discovery, versions of the idea go back to the 18th century. How seriously should we take those earlier ideas?

A. I think people aren’t generally aware of the great polymath John Michell [1724-1793], a scholar at Cambridge University who became a minister for the Church of England, yet continued his scientific studies. He’s known as the father of seismology; he was actually the first person to trace the epicenter of an earthquake, the great earthquake that leveled Lisbon, Portugal [in 1755]. He was also into astronomy, and took Newton’s theory to the ultimate limit, imagining a star so heavy that light couldn’t escape it.

I call this the Model T version of a black hole, because … he wasn’t imagining spacetime warping or bending, he was just imagining this huge lump of matter, as dense as the sun and wider than the orbit of Mars. He said that under those conditions, light would not be able to escape from the star; it would just be a dark point in the sky. He was very clever — he said you could see it by its gravitational tugs, if it was the companion of another star. That’s just the way we find black holes today. But Michell had the wrong theory of stellar physics and the wrong theory of light.

Q. Then in the 1930s, a more sophisticated version of black holes was proposed, and it took until the 1960s for the concept to gain acceptance. What happened?

A. Imagine you were raised in classical astronomy of the late 19th century and early 20th century. At that time, stars were [considered to be] eternal. They didn’t blow up. People didn’t even conceive of it. Along comes this Indian graduate student, Subrahmanyan Chandrasekhar, saying there’s a tipping point — that if you had a little more matter, the star would start shrinking. That idea was a real psychological barrier.

But slowly, scientists discovered the neutron particle, and could imagine neutron stars. Then in the 1930s, J. Robert Oppenheimer and his graduate students suggested even neutron stars have a [mass] limit, and would collapse to a point where light couldn’t escape. … This was the first modern description of a black hole. But he released this paper at an awful time. His paper was published the exact day Hitler took his forces into Poland, and most physicists were caught up with the military needs of World War II.

At the end of the 1940s into the 1950s, it was a chaotic time in particle physics. Physicists were finding all these particles with cosmic-ray experiments and accelerators, and no one knew how to categorize them. John Wheeler [1911-2008] felt that there’s gold in looking back at general relativity. He thought the idea that stars collapsed back to a point was a signal that there was new physics to be found.

Q. Why have black holes become such objects of cultural fascination?

A. It’s the ultimate horror movie. We all like to be scared, right? That’s why horror movies are such fun. We get this thrill thinking about the physics of the black hole, but safely in our armchair. And there are all these weird effects. It’s the astronomical equivalent of facing a dinosaur and possibly being eaten.

I think it’s just fun to think about what would happen if I went into a black hole. You would be sort of “noodle-ized,” as I say — if you were going in feet first, you would stretch like a noodle and you’d be obliterated. Is it a portal to another universe, as some theorists are suggesting? And the weirdness of the effects on space and time — that time grinds to a halt when you come to a black hole. If you were on the surface of a black hole, the evolution of the rest of the universe would be flying by you, while you stayed yourself in your own little bubble of spacetime.

Bartusiak awarded Davis Prize by the History of Science Society

Bartusiak honored by Astronomical Society of the Pacific