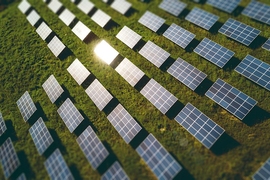 ↓ Download Image
Caption: A team of researchers at MIT and elsewhere has come up with a way to figure out the best type of solar panel for a given location and type of installation.

Caption:
A team of researchers at MIT and elsewhere has come up with a way to figure out the best type of solar panel for a given location and type of installation.

Which is a better deal: an established, off-the-shelf type of solar panel or a cutting-edge type that delivers more power for a given area but costs more?

It turns out that’s far from a simple question, but a team of researchers at MIT and elsewhere has come up with a way to figure out the best option for a given location and type of installation. The bottom line is that for household-scale rooftop systems in relatively dry locations, the more efficient but more costly panels would be better, but for grid-scale installations or for those in wetter climates, the established, less efficient but cheaper panels are better.

The costs of solar cells continue to plummet, while the costs of installation and the associated equipment remain relatively constant. So, figuring out the tradeoffs involved in planning a new installation has gotten more complicated. But the new study provides a clear way to estimate the best technology for a given project, the authors say.

The findings are reported today in the journal Nature Energy, in a paper by MIT graduate student Sarah Sofia, associate professor of mechanical engineering Tonio Buonassisi, research scientist I. Marius Peters, and three others at MIT and at First Solar and Siva Power, solar companies in California.

Instead of just looking at the amount of power each kind can deliver, the team analyzed all the associated installation and operational costs over time, to produce a measurement called the levelized cost of electricity (LCOE), a measure that incorporates all the costs and revenues over the lifetime of the system.

“Standard single-junction cells have a maximum efficiency limit of about 30 percent,” Sofia explains, whereas “tandem cells, using two materials, can have much higher efficiency, above 40 percent.” But while higher efficiency is obviously an advantage in principle, “when you make a tandem, you basically have two solar cells instead of one, so it’s more expensive to manufacture. So, we wanted to see if it’s worth it,” she says.

For their analysis, the team looked at three types of environment — arid (Arizona), temperate (South Dakota), and humid (Florida) — because the amount of water vapor in the air can affect how much sunlight reaches the solar cell. In each of these locations, they compared the standard two kinds of single-junction solar cells (cadmium telluride, or CdTe, and copper-indium-gallium-selenide, or CIGS) with two different types of tandem cells, two-junction or four-junction. Thus, a total of four different technologies were studied in each environment. In addition, they studied how the overall LCOE of the installations would be affected depending on whether overall energy prices remain constant or decline over time, as many analysts expect.

The results were somewhat surprising. “For residential systems, we showed that the four-terminal tandem system [the most efficient solar cell available] was the best option, regardless of location,” Sofia says. But for utility-scale installations, the cell with the lowest production costs is the best deal, the researchers found.

The new findings could be significant for those planning new solar installations, Sofia says. “For me, showing that a four-terminal tandem cell had a clear opportunity to succeed was not obvious. It really shows the importance of having a high energy yield in a residential system.”

But because utility-scale systems can spread the costs of the installation and the control systems over many more panels, and because space tends to be less constrained in such installations, “we never saw an opportunity” for the more costly, efficient cells in such settings. In large arrays, “because the installation costs are so cheap, they just want the cheapest cells [per watt of power],” she says.

The study could help to guide research priorities in solar technology, Sofia says. “There’s been a lot of work in this field, without asking this first [whether the economics would actually make sense]. We should be asking the question before we do all the work. … I hope this can serve as a guide to where research efforts should be focused,” she says.

The methodology the team developed for making the comparisons should be applicable to many other comparisons of solar technologies, not just the specific types chose for this study, Sofia says. “For thin-film technologies, this is generalizable,” she says.

Because the materials they studied for the four-terminal case are already commercialized, Sofia says, “if there was a company that had an interest,” practical, affordable four-junction tandem systems for residential applications could potentially be brought to market quite quickly.

“This paper breaks new ground because it precisely quantifies the cost of solar energy for different solar-panel technologies, in different climate zones, and for different application scales,” says Raffi Garabedian, the chief technology officer at First Solar, who was not involved in this research. “As the authors point out, high-efficiency tandem cells, once fully developed, should have the edge in high-installation cost environments such as residential rooftops.”

The research team also included Jonathan Mailoa at MIT, Dirk Weiss at First Solar Inc., and Billy Stanbery at Siva Power, both companies in Santa Clara, California. The work was supported by the National Research Foundation Singapore through the Singapore-MIT Alliance for Research and Technology (SMART), the Bay Area Photovoltaic Consortium, the U.S. Department of Energy, and the National Science Foundation.