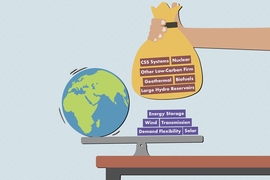 ↓ Download Image
Caption: New MIT research shows that, unless steady, continuous carbon-free sources of electricity are included in the mix, costs of decarbonizing the electrical system could be prohibitive and end up derailing attempts to mitigate the most severe effects of global climate change.
Credits: Image: Chelsea Turner 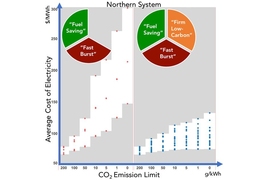 ↓ Download Image
Caption: Charts compare the expected costs of electricity under a wide variety of scenarios. In all cases, the costs of electricity are projected to be significantly lower, as shown on the vertical axis, if a wider range of carbon-free supply options are included (chart at right) than with a more limited set of choices (chart at left), especially in the later years as carbon emissions get closer to zero, as shown on the horizontal axis. The plotted data points represent the results of many different simulations using different assumptions.
Credits: Courtesy of the researchers

Caption:
New MIT research shows that, unless steady, continuous carbon-free sources of electricity are included in the mix, costs of decarbonizing the electrical system could be prohibitive and end up derailing attempts to mitigate the most severe effects of global climate change.
Credits:
Image: Chelsea Turner

Caption:
Charts compare the expected costs of electricity under a wide variety of scenarios. In all cases, the costs of electricity are projected to be significantly lower, as shown on the vertical axis, if a wider range of carbon-free supply options are included (chart at right) than with a more limited set of choices (chart at left), especially in the later years as carbon emissions get closer to zero, as shown on the horizontal axis. The plotted data points represent the results of many different simulations using different assumptions.
Credits:
Courtesy of the researchers

In major legislation passed at the end of August, California committed to creating a 100 percent carbon-free electricity grid — once again leading other nations, states, and cities in setting aggressive policies for slashing greenhouse gas emissions. Now, a study by MIT researchers provides guidelines for cost-effective and reliable ways to build such a zero-carbon electricity system.

The best way to tackle emissions from electricity, the study finds, is to use the most inclusive mix of low-carbon electricity sources.

Costs have declined rapidly for wind power, solar power, and energy storage batteries in recent years, leading some researchers, politicians, and advocates to suggest that these sources alone can power a carbon-free grid. But the new study finds that across a wide range of scenarios and locations, pairing these sources with steady carbon-free resources that can be counted on to meet demand in all seasons and over long periods — such as nuclear, geothermal, bioenergy, and natural gas with carbon capture — is a less costly and lower-risk route to a carbon-free grid.

The need for cost effectiveness

“In this paper, we’re looking for robust strategies to get us to a zero-carbon electricity supply, which is the linchpin in overall efforts to mitigate climate change risk across the economy,” Jenkins says. To achieve that, “we need not only to get to zero emissions in the electricity sector, but we also have to do so at a low enough cost that electricity is an attractive substitute for oil, natural gas, and coal in the transportation, heat, and industrial sectors, where decarbonization is typically even more challenging than in electricity. ”

Sepulveda also emphasizes the importance of cost-effective paths to carbon-free electricity, adding that in today’s world, “we have so many problems, and climate change is a very complex and important one, but not the only one. So every extra dollar we spend addressing climate change is also another dollar we can’t use to tackle other pressing societal problems, such as eliminating poverty or disease.” Thus, it’s important for research not only to identify technically achievable options to decarbonize electricity, but also to find ways to achieve carbon reductions at the most reasonable possible cost.

To evaluate the costs of different strategies for deep decarbonization of electricity generation, the team looked at nearly 1,000 different scenarios involving different assumptions about the availability and cost of low-carbon technologies, geographical variations in the availability of renewable resources, and different policies on their use.

Regarding the policies, the team compared two different approaches. The “restrictive” approach permitted only the use of solar and wind generation plus battery storage, augmented by measures to reduce and shift the timing of demand for electricity, as well as long-distance transmission lines to help smooth out local and regional variations. The  “inclusive” approach used all of those technologies but also permitted the option of using  continual carbon-free sources, such as nuclear power, bioenergy, and natural gas with a system for capturing and storing carbon emissions. Under every case the team studied, the broader mix of sources was found to be more affordable.

The cost savings of the more inclusive approach relative to the more restricted case were substantial. Including continual, or “firm,” low-carbon resources in a zero-carbon resource mix lowered costs anywhere from 10 percent to as much as 62 percent, across the many scenarios analyzed. That’s important to know, the authors stress, because in many cases existing and proposed regulations and economic incentives favor, or even mandate, a more restricted range of energy resources.

“The results of this research challenge what has become conventional wisdom on both sides of the climate change debate,” Lester says. “Contrary to fears that effective climate mitigation efforts will be cripplingly expensive, our work shows that even deep decarbonization of the electric power sector is achievable at relatively modest additional cost. But contrary to beliefs that carbon-free electricity can be generated easily and cheaply with wind, solar energy, and storage batteries alone, our analysis makes clear that the societal cost of achieving deep decarbonization that way will likely be far more expensive than is necessary.”

A new taxonomy for electricity sources

In looking at options for new power generation in different scenarios, the team found that the traditional way of describing different types of power sources in the electrical industry — “baseload,” “load following,” and “peaking” resources — is outdated and no longer useful, given the way new resources are being used.

Rather, they suggest, it’s more appropriate to think of power sources in three new categories: “fuel-saving” resources, which include solar, wind and run-of-the-river (that is, without dams) hydropower; “fast-burst” resources, providing rapid but short-duration responses to fluctuations in electricity demand and supply, including battery storage and technologies and pricing strategies to enhance the responsiveness of demand; and “firm” resources, such as nuclear, hydro with large reservoirs, biogas, and geothermal.

“Because we can’t know with certainty the future cost and availability of many of these resources,” Sepulveda notes, “the cases studied covered a wide range of possibilities, in order to make the overall conclusions of the study robust across that range of uncertainties.”

The group used a range of projections, made by agencies such as the National Renewable Energy Laboratory, as to the expected costs of different power sources over the coming decades, including costs similar to today’s and anticipated cost reductions as new or improved systems are developed and brought online. For each technology, the researchers chose a projected mid-range cost, along with a low-end and high-end cost estimate, and then studied many combinations of these possible future costs.

Under every scenario, cases that were restricted to using fuel-saving and fast-burst technologies had a higher overall cost of electricity than cases using firm low-carbon sources as well, “even with the most optimistic set of assumptions about future cost reductions,” Sepulveda says.

That’s true, Jenkins adds, “even when we assume, for example, that nuclear remains as expensive as it is today, and wind and solar and batteries get much cheaper.”

The authors also found that across all of the wind-solar-batteries-only cases, the cost of electricity rises rapidly as systems move toward zero emissions, but when firm power sources are also available, electricity costs increase much more gradually as emissions decline to zero.

“If we decide to pursue decarbonization primarily with wind, solar, and batteries,” Jenkins says, “we are effectively ‘going all in’ and betting the planet on achieving very low costs for all of these resources,” as well as the ability to build out continental-scale  high-voltage transmission lines and to induce much more flexible electricity demand.

In contrast, “an electricity system that uses firm low-carbon resources together with solar, wind, and storage can achieve zero emissions with only modest increases in cost even under pessimistic assumptions about how cheap these carbon-free resources become or our ability to unlock flexible demand or expand the grid,” says Jenkins. This shows how the addition of firm low-carbon resources “is an effective hedging strategy that reduces both the cost and risk” for fully decarbonizing power systems, he says.

Even though a fully carbon-free electricity supply is years away in most regions, it is important to do this analysis today, Sepulveda says, because decisions made now about power plant construction, research investments, or climate policies have impacts that can last for decades.

“If we don’t start now” in developing and deploying the widest range of carbon-free alternatives, he says, “that could substantially reduce the likelihood of getting to zero emissions.”

David Victor, a professor of international relations at the University of California at San Diego, who was not involved in this study, says, “After decades of ignoring the problem of climate change, finally policymakers are grappling with how they might make deep cuts in emissions. This new paper in Joule shows that deep decarbonization must include a big role for reliable, firm sources of electric power. The study, one of the few rigorous numerical analyses of how the grid might actually operate with low-emission technologies, offers some sobering news for policymakers who think they can decarbonize the economy with wind and solar alone.”

The research received support from the MIT Energy Initiative, the Martin Family Trust, and the Chilean Navy.

Axios reporter Ben Geman writes that MIT researchers have found the most effective way to reduce emissions from electricity sources is to use a mix of renewable and other low-carbon tech options. “It’s not about specific technologies. It’s about those key roles that we need filled on the low-carbon team,” explains study co-author Jesse Jenkins.