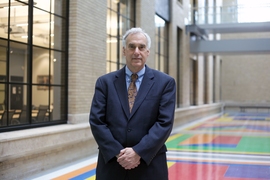 On March 23, President Trump signed an omnibus spending measure for fiscal year 2018, providing money to run the federal government through Sept. 30. Until the omnibus passed, agencies had been funded this fiscal year through continuing resolutions that temporarily extended funding at fiscal 2017 levels. MIT News spoke with David Goldston, director of the MIT Washington Office, about the new budget’s implications for federal spending on research and other areas important to the Institute.

Q. What does the new budget mean for research spending?

A. The omnibus turned out to be very good news for science funding: Research spending will hit an all-time high in inflation-adjusted dollars. Basic and applied research are increased by more than 10 percent. The year-over-year percentage increase in research spending is the highest since fiscal 2009, a year that included one-time emergency stimulus money to counter the Great Recession. The last time research received such a large percentage increase before that was fiscal 2001, in the midst of the effort to double the budget of the National Institutes of Health [NIH].

Not surprisingly, the NIH — long a Congressional favorite — fares well under the omnibus, with an 8.7 percent increase, but so does the Department of Energy [DOE], the home of applied research programs that conservatives have tried to limit since the Reagan Administration, and a target of the Trump Administration. The omnibus provides an increase of more than 12 percent for DOE, with its research programs doing even better, in percentage terms.

The key to this happy outcome was the bipartisan agreement earlier this year to increase the spending caps on discretionary spending. The primary determinant of the federal spending level for research is the size of the overall federal spending pie. In a bill President Trump signed into law in February, Congress raised the amount of money available for non-defense spending in fiscal 2018 by almost 12 percent and the amount available for defense spending by about 14 percent.

Once Congress reached that deal after months of stalemate, the die was pretty much cast for research (in a positive way). For decades, research and development has received a relatively steady share of total discretionary spending, and this year was no exception, with R&D spending rising in parallel with overall spending.

The increase in the spending caps — an amendment to a 2011 law to rein in spending to reduce the deficit — was a bipartisan agreement. Both Republicans and Democrats thought the limits on defense spending were too low, and Democrats argued that the non-defense caps should be raised by the same amount as defense. Since Democratic votes are needed to get any spending bill through the Senate, the final agreement on the caps included a significant, though not equal, increase for both defense and non-defense spending.

Note that these agreements just concern discretionary spending, which Congress allocates annually through appropriations bills. By far, the larger portion of the budget is mandatory spending — Social Security, Medicare, other entitlement programs — which Congress can change only by changing the laws governing those programs (as opposed to setting spending levels). Another aspect of mandatory spending is interest on the national debt (about 6 percent of the budget), which can’t be changed without the U.S. reneging on its financial obligations.

Q. What’s the outlook for future spending — both in fiscal 2019 and beyond?

A. The best guess at this point is that fiscal 2019 will be another good year for research. The bipartisan agreement on spending caps set overall spending levels for fiscal 2019 as well as for this fiscal year. The fiscal 2019 caps provide a small increase over fiscal 2018 spending, so research spending is likely to hold steady, even after accounting for inflation, or see a slight increase.

President Trump’s budget proposal for fiscal 2019, released in February, was better for science overall than his fiscal 2018 proposal because of the additional money made available by raising the caps.

The fiscal 2019 process is just getting going on Capitol Hill, but the assumption is that the early stages of the process will have smooth sailing and then Congress will put off final negotiations until after the elections, since the control of the Congress — particularly the House — is up for grabs. So, expect a continuing resolution at fiscal 2018 levels from Oct. 1 to mid-November.

After fiscal 2019, the outlook is murky and treacherous. Without further Congressional action, the spending caps in the 2011 law will come back into effect, causing discretionary spending to plummet. It’s impossible to predict what the political and economic situation will look like at that point. But the federal deficit will likely be on the rise significantly because of raising the spending caps and, most economists believe, because of the massive tax law enacted in December. If the deficit once again becomes an issue and Congress remains too divided to reach any deals on mandatory spending, then discretionary spending will come under severe pressure.

Other uncertainties involve the overall political environment for research spending and higher education. Surveys continue to show strong and steady public support for science, but political polarization over issues like climate change could at some point start eroding that. And antipathy toward elite research institutions — demonstrated by the new endowment tax — is also something to watch (and combat). But the biggest concern remains the overall fiscal situation.

Q. What has MIT done about all this and what will it do?

A. MIT has continued to work closely with the Association of American Universities and the Association of Public and Land Grant Universities to make the argument for federal research spending. President L. Rafael Reif and Vice President for Research Maria Zuber have met and are continuing to meet with White House and Congressional officials to press the case. The MIT Washington Office is working not only to raise overall funding for R&D, but has worked with faculty to hammer home the need for funding for specific areas of concern, including fusion and specific NASA projects.

Notably, officials have mentioned growing competition with China, including in artificial intelligence, as one reason that U.S. research spending needs to remains strong. So these arguments are being heard.

Letter regarding federal tax proposals and the MIT community

Tyler Jacks: NIH budget cuts would have “devastating” effects on progress against cancer