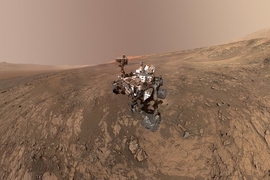 NASA’s Curiosity rover has found evidence of complex organic matter preserved in the topmost layers of the Martian surface, scientists report today in the journal Science.

While the new results are far from a confirmation of life on Mars, scientists believe they support earlier hypotheses that the Red Planet was once clement and habitable for microbial life. However, whether such life ever existed on Mars remains the big unknown.

Since Curiosity landed on Mars in 2012, the rover has been exploring Gale Crater, a massive impact crater roughly the size of Connecticut and Rhode Island, for geological and chemical evidence of the chemical elements and other conditions necessary to sustain life. Almost exactly a year ago, NASA reported the discovery of such evidence in the form of an ancient lake that would have been suitable for microbial life to not only survive but flourish.

Now, scientists have found signs of complex, macromolecular organic matter in samples of the crater’s 3-billion-year-old mudstones — layers of mud and clay that are typically deposited on the floors of ancient lakes. Curiosity sampled mudstone in the top 5 centimeters from the Mojave and Confidence Hills localities within Gale Crater. The rover’s onboard Sample Analysis at Mars (SAM) instrument analyzed the samples by heating then in an oven under a flow of helium. Gases released from the samples at temperatures over 500 degrees Celsius were carried by the helium flow directly into a mass spectrometer. Based on the masses of the detected gases, the scientists could determine that the complex organic matter consisted of aromatic and aliphatic components including sulfur-containing species such as thiophenes.

MIT News checked in with SAM team member Roger Summons, the Schlumberger Professor of Geobiology in the Department of Earth, Atmospheric and Planetary Sciences, and a co-author on the Science paper, about what the team’s findings might mean for the possibility of life on Mars.

Q: What organic molecules did you find, and how do they compare with anything that is found or produced on Earth?

A: The new Curiosity study is different from the previous reports that identified small molecules composed of carbon, hydrogen, and chlorine. Instead, SAM detected fragments of much larger molecules that had been broken up during the high-temperature heating experiment. Thus, SAM has detected “macromolecular organic matter” otherwise known as kerogen. Kerogen is a name given to organic material that is present in rocks and in carbonaceous meteorites. It is generally present as small particles that are chemically complex with no easily identified chemical entities. One analogy I use is that it is something like finding very finely powdered coal-like material distributed through a rock. Except that there were no trees on Mars, so it is not coal. Just coal-like.

The problem with comparing it to anything on Earth is that Curiosity does not have the highly sophisticated tools we have in our labs that would allow a deeper evaluation of the chemical structure. All we can say from the data is that there is complex organic matter similar to what is found in many equivalent aged rocks on the Earth.

Q: What could be the possible sources for these organic molecules, biological or otherwise?

A: We cannot say anything about its origin. The significance of the finding, however, is that the results show organic matter can be preserved in Mars surface sediments. Previously, some scientists have said it would be destroyed by the oxidation processes that are active at Mars’ surface. It is also significant because it validates plans to return samples from Mars to Earth for further study.

Q: The Curiosity rover found the first definitive evidence of organic matter on Mars in 2014. Now with these new results, what does this all say about the possibility that there is, or was life on Mars?

A: Yes, previously, Curiosity found small organic molecules containing carbon, hydrogen, and chlorine. Again, without having a Mars rock in a laboratory on Earth for more detailed study, we cannot say what processes formed these molecules and whether they formed on Mars or somewhere in the interstellar medium and were transported in the form of carbonaceous meteorites. Unfortunately, the new findings do not allow us to say anything about the presence or absence of life on Mars now or in the past. On the other hand, the finding that complex organic matter can be preserved there for more than 3 billion years is a very encouraging sign for future exploration. “Preservation” is the key word, here. It means that, one day, there is potential for more sophisticated instrumentation to detect a wider range of compounds in Mars samples, including the sorts of molecules made by living organisms, such as lipids, amino acids, sugars, or even nucleobases.