Why some Muslim clerics become jihadists 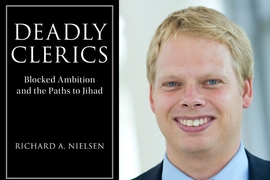 ↓ Download Image
Caption: Richard Nielsen’s book, “Deadly Clerics: Blocked Ambition and the Paths to Jihad,” finds a certain portion of Muslim clerics who end up advocating for jihad — war against Islam’s foes — started out as mainstream clerics looking for state-sponsored jobs where they could use their intellectual training, only to become unemployed, disenchanted, and radicalized.

Caption:
Richard Nielsen’s book, “Deadly Clerics: Blocked Ambition and the Paths to Jihad,” finds a certain portion of Muslim clerics who end up advocating for jihad — war against Islam’s foes — started out as mainstream clerics looking for state-sponsored jobs where they could use their intellectual training, only to become unemployed, disenchanted, and radicalized.

More specifically, the book finds, a certain portion of Muslim clerics who end up advocating for jihad — war against Islam’s foes — started out as mainstream clerics looking for state-sponsored jobs where they could use their intellectual training, only to become unemployed, disenchanted, and radicalized.

“Frustration with circumstances can make people angry and lead them to political violence,” says Richard Nielsen, an associate professor in MIT’s Department of Political Science and author of a newly published book on the subject, based on years of original research.

While that’s a general truth explaining a number of forms of political radicalization, Nielsen’s work specifically probes, in close detail, what happens to trained Muslim clerics, using his own on-the-ground observations and deep analysis of online texts clerics produce. Nielsen finds that about 10 percent of the clerics writing on the internet are jihadists, though he notes that clerics publishing online are not representative of all of Islam. But many of those who gain an audience this way, he has found, first failed to make a living in mainstream society.

“If they don’t have as many connections, they’re at greater risk of not making good on the investment they put into their legal training, and at greater risk of becoming jihadists,” Nielsen explains. He calles this the “blocked ambition” cause of jihadist activity. It is not the only way people become radicalized, to be sure, but represents an underexplored one, he says.

Nielsen’s book, “Deadly Clerics: Blocked Ambition and the Paths to Jihad,” is being published this week by Cambridge University Press. It is his first book.

Nielsen’s book is the fruit of two main avenues of research. He spent two years doing research among students training to be clerics in Cairo. Additionally, he performed a deep textual analysis of the online writings of a sample group of clerics, to see what proportion developed radical leanings; he did that in part through computerized searches for key words, phrases, and textual patterns. The result is a work that is equal parts anthropological investigation and big-data analysis of Islamic writing. All told, Nielsen wound up scrutinizing a group of about 200 clerics.

“I try to draw the reader into the world of Muslim clerics in the same way that I have spent almost the last decade getting immersed in this world,” Nielsen says. “I wanted to do something more in the tradition of anthropology.”

Of course, not everyone who becomes a jihadist is a thwarted cleric, and in Nielsen’s account, there are at least two common paths to jihadism. On the one hand, some jihadist clerics become attached to radicalism first, before engaging in clerical study.

On the other hand, Nielsen’s research shows that a nontrivial portion of radical clerics are people who seemingly did not start out intending to become political radicals, but moved in that direction after their job possibilities and career prospects, either in academia or other state-sponspored venues, evaporated.

“It’s a minority [of clerics] who fit the story,” Nielsen says. “But I think it’s an important minority.”

The “blocked ambition” hypothesis also helps underscore a larger feature of the jihadist world, namely, the extent to which radical clerics tout their own academic credentials as a way of seeking status. As Nielsen observes in the book, this applies to many of the best known jihadist clerics, including Abu Bakr al-Baghdadi, leader of the Islamic State of Iraq and Syria (ISIS), and Ayman al-Zawahiri, present leader of al-Qaeda.

Nielsen’s book is also the first study that systematically moves toward an estimate of how many Muslim clerics are in fact jihadist clerics, who justify and encourage terrorism and other acts of war. To be sure, Nielsen notes, the group of clerics who publish online differs from the entire population of clerics in two possible ways: Some clerics with an internet presence are high up in the formal religious hierarchy, while others have been expelled from it. Still, analyzing how many radicals exist in his sample group is a step forward quantitatively.

“It was bigger than I expected, but smaller than some would claim,” Nielsen says of his estimate. “No one has known what percentage of clerics are jihadists in any domain. … It’s something I hope to put out there in the scholarly literature and have other people work from.”

Nielsen’s research for his new book has also generated a second book project, which he is now pursuing, about the ways the online world helps shape authority and communication in the Islamic world.

In a development that will support that project, Nielsen was one of 35 scholars nationally to be named an Andrew Carnegie fellow for the 2017-18 academic year, a prestigious award granted by the Carnegie Corporation of New York. As with the “Deadly Clerics” book, he aims to blend a big-data style of textual analysis with political analysis.

“One of my goals with this book is to push forward the possibility in young researchers’ minds that this is a combination of methods they could pursue,” Nielsen says. “In the era of big data, we’re actually going to have to get better at interpreting what other humans meant when they did something.”

Nielsen has posted his original data sets for “Deadly Clerics” online and invites other researchers and scholars to use them for their own analyses.

“I’m not worried about competition,” Nielsen says. “I’d actually like more researchers working on this topic.”