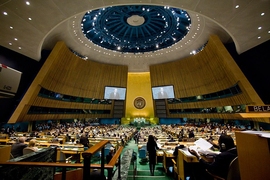 Since World War II, more than 45 international human-rights treaties have been signed by many of the world’s roughly 200 countries. But why do some states sign such accords, especially if they lack a strong human-rights commitment in the first place?

One prominent idea holds that treaty-ratifying countries are essentially bought off: They agree to lend support to the human-rights movement in exchange for material good, such as foreign aid or more trade. However, a new study co-authored by an MIT political scientist finds that not to be the case; the actions of states, it concludes, are not economic in nature, but probably have to do with internal political maneuvering instead.

“We couldn’t find any evidence that rewards come to states that ratify human rights treaties,” says Richard Nielsen, an assistant professor of political science, and a co-author of a new paper that scrutinizes the actions of countries occupying what he calls “the middle zone between pure democracy and nondemocracy.”

Or, as the paper concludes, there is no hard data suggesting that “formal state commitments to international human rights have been bought and paid for.”

Of course, that leaves the question of why leaders in that “middle zone” sign treaties that may leave them open to criticism for not honoring their stated commitments.

“We think it has a lot more to do with domestic politics,” Nielsen says, adding that signing on to treaties may represent an “attempt to appease nascent opposition without giving away the throne, if you will, for these presidents-for-life or other semiautocratic leaders.”

The core of the treaty system

The paper — titled “Rewards for Ratification: Payoffs for Participating in the International Human Rights Regime?” — is co-authored by Nielsen and Beth Simmons, a professor at Harvard University, and is being published by the International Studies Quarterly.

“We picked these four because they are the core of the U.N. treaty system,” Nielsen says.

The researchers then looked to see if the signing of treaties from 1986 to 2010 — among 120 developing countries not sponsoring the accords in the first place — led to an increase in foreign aid, trade agreements, or bilateral investment agreements. What they found was a “null result” — no sign that tangible material gains led to ratification.

That leads Nielsen to suggest that a couple of alternative explanations bear further examination. One, which Nielsen says characterizes some post-Soviet states, is that “newly democratic leaders sign these treaties to lock in democracy. That’s not because of the goodness of their hearts. They know if things revert back to autocracy, they as the previous leaders are likely to face some negative consequences.”

Still, he notes, this can only explain a subset of what he calls the “strange ratifiers” of human-rights treaties. Another explanation, which Nielsen ascribes to James Vreeland, a political scientist at Georgetown University, is that signing treaties, for nondemocratic states, “is a concession to domestic political actors.” For some leaders, Nielsen explains, “It’s cheaper to sign this agreement than to bring the opposition into parliament.”

Still, signing an accord may come at a cost: Autocratic leaders can open themselves up to criticism, from within and without, if they then ignore the terms of the pact they just ratified.

“I think it is more binding than autocrats expect,” Nielsen says.

Signing human-rights treaties also does not produce one intangible benefit that Nielsen and Simmons looked for: Ratification seems to produce almost no public praise from the international community that would seem to elevate the stature of smaller state leaders.

To determine that, the researchers performed a textual analysis of press releases from the U.S. State Department, over a 15-year period, and the European Union, dating to 1987, finding very few examples of Western countries publicly applauding autocratic leaders for signing accords. So whatever domestic political benefits accrue from ratification, they are not from formal Western welcomes into the global community.

Other scholars have found the study intriguing. Darren Hawkins, a political scientist at Brigham Young University, agrees that “most scholars have posited that [developing countries] are getting some reward from powerful Western states” for treaty ratification. And yet, he adds, “This article shows that none of those things occur. We are thus left with an even deeper puzzle.” Scholars in the field need to seek a “better understanding of the motives and views of leaders in developing countries vis-a-vis human rights treaties,” Hawkins suggests.

Nielsen emphasizes that more research on the topic would be welcome, although he thinks the basic evidence should lead scholars to look more closely to state-by-state politics in developing a full theory of treaty ratification.

“We think those theories have been undervalued,” Nielsen says. “They might provide a better explanation.”

Evan Lieberman: Southern Africa as a lens on ethnicity, governance, and citizenship